Google’s recent tab-based Gmail redesign showed that the company isn’t afraid to tackle a problem that far too many of us suffer – inbox overload. It could be doing a lot more, though. How long before it builds a Mailbox-esque ‘inbox time machine’ into its email service?

Mailbox received praise when it launched on iOS, thanks to the way it allowed for quick email sorting and the ability to set emails to disappear until a given date and time. For anyone looking to quickly whip their inbox into shape on the go, it’s undoubtedly a handy tool.

Mailbox isn’t entirely original though. Baydin‘s Boomerang has been doing a similar thing as a desktop Gmail and Microsoft Outlook plugin for some time now to much praise from productivity nuts like our own CEO. Last week Boomerang landed on Android, offering an alternative to Mailbox for those using Google’s mobile OS.

Why does anyone really need email delay tactics?

You might think that getting rid of your email until such time as you can deal with it is a pretty niche tactic, but in that case I’d argue that you either haven’t given it a decent chance or you don’t have a problem with email overload. I was skeptical about tools like Mailbox and Boomerang until I tried them but now they’re an essential part of my workflow. 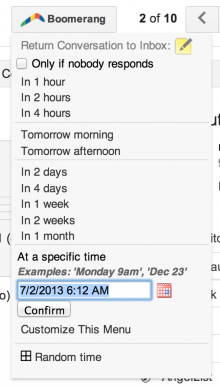 Seriously – when I recently switched from an iPhone 4S to a Nexus 4 as my main mobile device, the only thing I missed about iOS was Mailbox. Then last week’s arrival of Boomerang for Android got me right back into a super-productive email routine.

A plea for a native solution

Email isn’t becoming any less of a problem and no-one has yet found a way to do away with it completely, so the more tools that we have readily at our disposal to deal with it the better.

It really wouldn’t be a surprise to see Google, Yahoo or Microsoft build Mailbox/Boomerang-style features right into their own email services. In fact, with Mailbox already in Dropbox’s hands, that leaves Baydin as an interesting acquisition target for any of those companies.

I have no knowledge of any potential interest in acquiring Baydin, but there’s no doubt that it would be an interesting deal. Given that Boomerang is already designed for Gmail, Google would be an obvious possibility but regardless of who bought the startup, it would be pretty simple for rival Web-based email providers to add similar functionality themselves.

This isn’t just an observation that it would be a nice idea – it’s a plea to Google, Yahoo and Microsoft to take a look at Boomerang and Mailbox and build similar features in to Gmail, Yahoo Mail and Outlook.com. Sure, not everyone will use them but the praise that both those apps have received shows how useful they are.

You could argue that these are ‘pro tools’ best left to those who need them enough need to seek them out. However, I believe that with better tools for managing our inboxes we would all be able to feel better about email – and maybe we’d see fewer tweets, Facebook missives and blog posts complaining about how annoying it is… at least until someone finally does away with it completely.