It’s time to write. I make some coffee, open a blank document, then decide to quickly check Slack before I get started.

Team chat apps are essential for online collaboration, but their very existence makes it hard to focus on longer-term projects. There’s always something I could be responding to on Slack, and responding to those things usually feels productive—and sometimes it is. But that time adds up, and I’m perpetually putting off bigger projects because of it.

I know I could solve this problem by simply closing Slack, or turning off notifications, but that’s not enough for me. Just the idea that I could open Slack distracts me, and the app is always just a click away. Which is why I decided to do an experiment: block Slack entirely for a couple of hours every work day, using software that makes it impossible for me to open the app even if I want to. And I invited my coworkers to do the same.

For when you’re not blocking Slack, you can still cut down on the time spent in the app by automating some of your Slack workflows. Here are the best automations for Slack users.

Slack is fuzzy — and that’s the problem

“My first thought on seeing this experiment was ‘who even am I without Slack?'” said Katie Redderson-Lear, Escalations Customer Champion at Zapier. “So I feel like that’s a sign that I should try this.”

Apps like Slack are essential for remote teams—they really are the virtual office. But Slack is addictive in precisely the way other messaging apps are: notifications, red dots, and other features capture my attention and ensure that I spend more time in the app.

So it makes sense that Slack is the app I spent the most time in this month, according to the time tracking app on my laptop. Google Chrome, a browser I use only for work, is a close second—mostly for research but also for writing and editing in Google Docs. Ulysses, the app I do first drafts in, comes third—and I spend half as much time using that app as I do using Slack.

But that leaves a quarter of my Slack time just…chatting. At least 10 hours a month, probably. This isn’t a bad thing, necessarily—small talk at work is healthy, and it’s particularly important in the era of social distancing when I’m more starved than ever for social interaction. But right now, the balance is off. I also know that the existence of Slack makes it hard for me to focus on writing.

This isn’t about whether Slack is good or bad for productivity—ultimately, Slack is just a tool. This is about examining how we use a particular tool, then making adjustments so that it works better for us. It turns out that, to use Slack well, I need to block it when it’s time to focus. If you feel the same way, here’s how.

How to block Slack

There are plenty of apps to help you focus and block distractions. For this experiment, we used the Mac app SelfControl because it’s free and nearly impossible to undo. 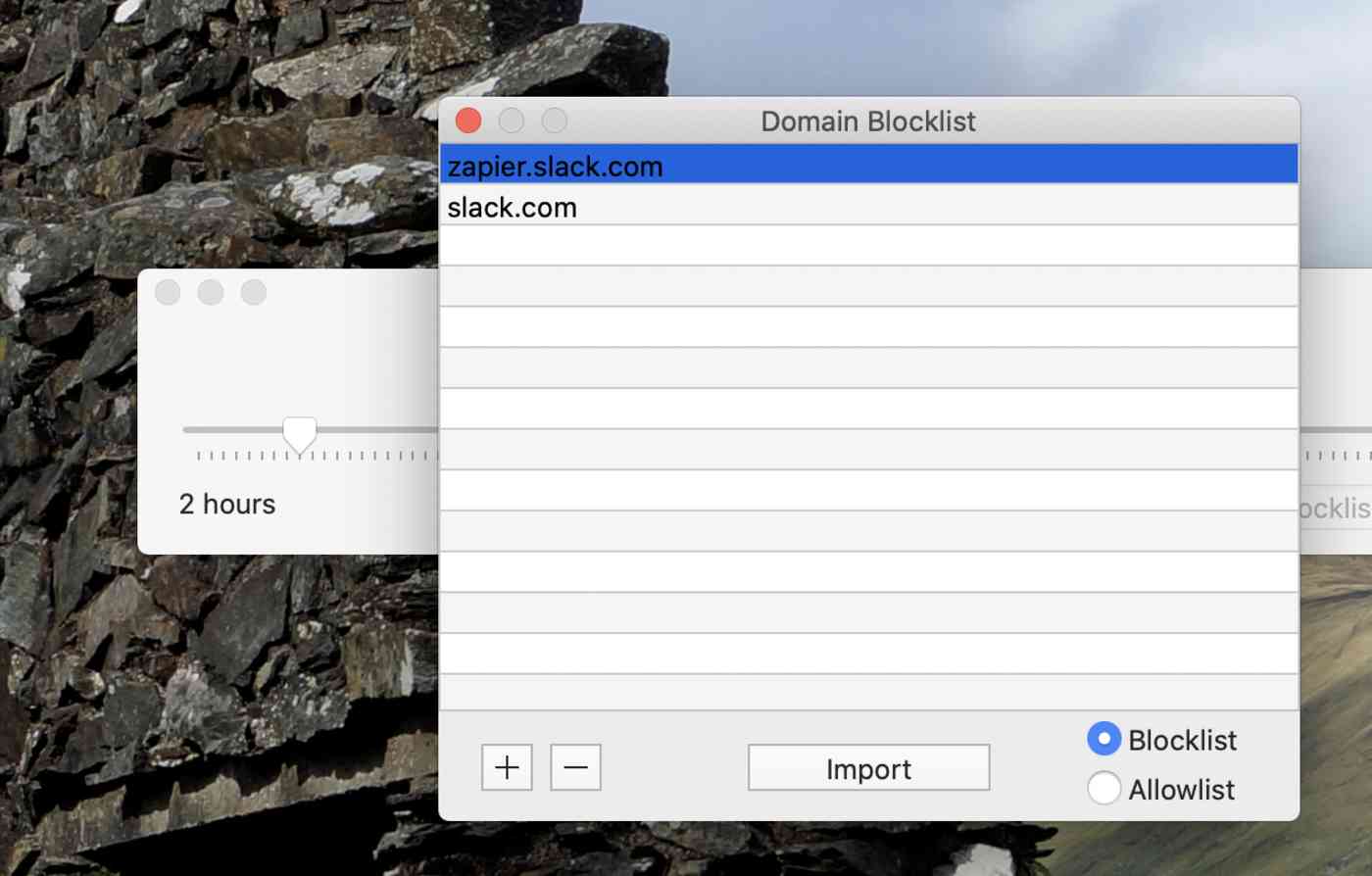 These apps all work the similarly: you add a list of domains to block, set a timer, and then have no choice but to wait out the clock. To block Slack, you need to block “slack.com” and your particular Slack subdomain (for example, “zapier.slack.com”). Make sure you also close Slack—in some cases notifications still come in, meaning you’ll see incoming messages but won’t be able to respond. That’s basically torture—and the opposite of the point.

My usual routine is to block out two or three hours on my calendar. I ensure that all research is done ahead of time, particularly anything that I need to ask coworkers about. Then, when my focus block comes up, I close Slack and block it using Self Control. I usually also block Twitter, too, just for good measure—add any apps that you tend to lose time to.

The nice thing about Self Control is that it’s impossible to undo: short of reinstalling your OS, you aren’t going to access Slack on your computer after you click the Start button—at least, not until the timer runs out.

The specifics are going to vary depending on what software you use, but here are some tips we learned that are useful for every platform.

The surprising freedom of not being able to chat

A few of my coworkers blocked Slack with me. How was it? In a word, liberating.

“I disabled Slack for an hour today, and it was very freeing,” said Eileen Ruberto, Senior UX Researcher at Zapier.

“I got more done in 11 minutes than I get done in an hour with Slack open,” Deb said. “Knowing that I literally couldn’t check Slack, even if I wanted to, helped get me into focus mode. There are plenty of times I don’t check Slack for an hour, but even knowing it’s there distracts me and brings me out of my zone.”

I relate to this a lot. Sometimes I’ll get stuck while writing and open Slack, more out of reflex than anything else. When Slack is blocked, I can’t do that, so I don’t even try opening it. Just knowing that I can’t access Slack makes it easier to focus. That, in turn, can lead to a kind of momentum after the clock expires.

“I ended up working with Slack closed for an additional two hours, without the block, because I was in the zone,” said Eileen.

I feel the same way. I just got through a two-hour blocked session, but am now wrapping up this article instead of checking what I missed.

It wasn’t all upsides, though. The main problem we ran into was predictable: sometimes you don’t know something, and need to ask a coworker for help. The solution was simple enough.

“I was afraid that I’d need to look something up in Slack,” Eileen said. “There were a couple of things I absentmindedly tried to check Slack for, but then I just jotted them down to handle them later.”

Another problem was the all-too-human capacity to find new distractions.

“At first I thought Slack was still working, even though it wasn’t, so I wasted at least 10 minutes poking around to see if I could still get into it,” Katie said. She continued:

I was trying to finish my Friday update and go through some feedback on a doc to make updates. I finished the update, but learned I’m very good at finding other distractions—apparently Slack is not my only problem, I’ve now also blocked Twitter and Google Calendar (maybe I am the real problem, honestly.)

This didn’t fix everything about my habits, but it did give me enough momentum to finish this article. It can probably help you too. Give it a try, and let us know if it works. 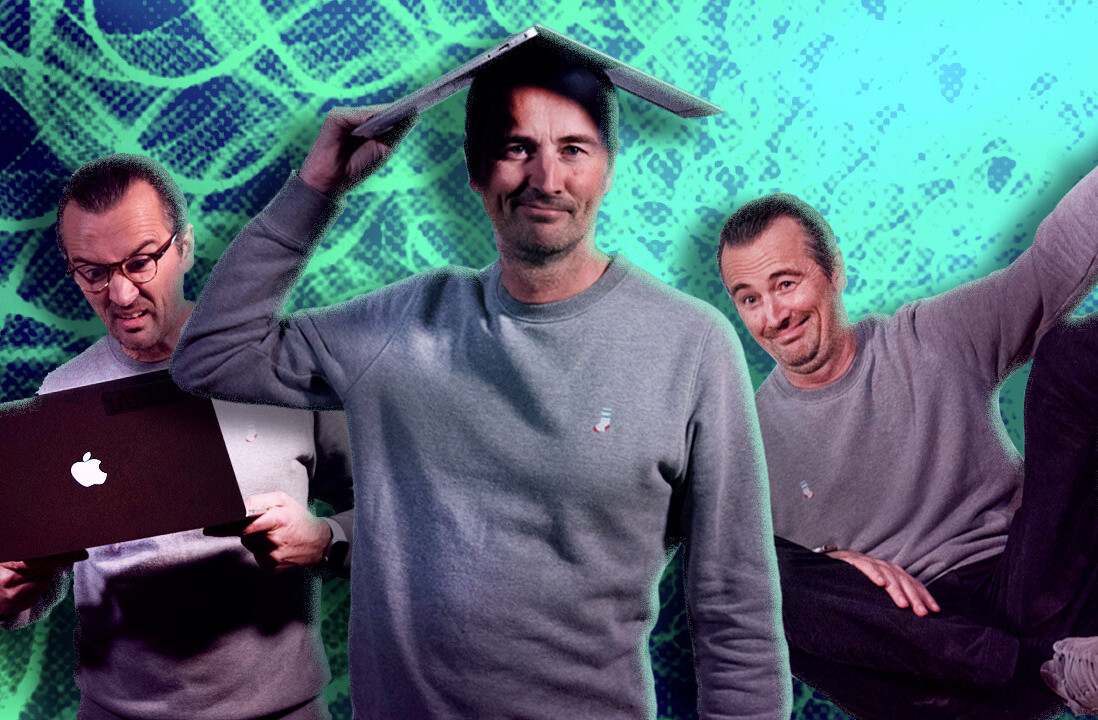