Welcome to our twenty-second Tumblr Tuesday, where every Tuesday we celebrate our love of Tumblr by interviewing the mastermind behind a new blog. Tumblr, a New York City based startup, is like the FFFFound for the rest of the world. It’s as shareable and fast-paced as Twitter but populated with more in-depth text and rich images.

For this week’s Tumblr Tuesday, we caught up with creative New Yorkers Andrew Lynagh and his pal and three-time TNW interviewee Michael Krivicka of the marketing agency Thinkmodo, who is responsible for the awesome videos: iPad Head Girl and What Girls Look At. We introduced you to the duo’s latest project, “Plaid Forever“, highlighting the new YouTube talk show that’s filmed solely on iPhones.

Each episode of the unscripted web show features 2 NYC based artists and their works. Each “guest” must wear plaid and also become a camera person so the both Lynagn and Krivicka are video taped by the guest and the resulting video is a synced, multi-split screen. For this week’s TT, we’re going to dig behind the scenes of Plaid Forever and find out what it is about plaid that really gets video viral marketer Michael Krivicka so excited…(Rumor has it he owns 17 different plaid shirts…) 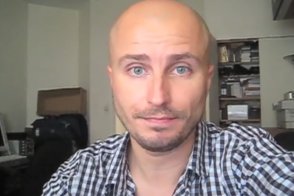 CBM: What was the inspiration behind this Tumblr project?

Michael Krivicka (pictured right): Andrew and I have been friends for a while and every time we would meet up for happy hour with our girlfriends and wives, we would get a lot of crap from them for wearing plaid. To us that was a challenge to come up with something that would justify that fashion trend and make it last “forever”. And so “Plaid Forever” was born.

Once we realized that the URL was available, we quickly bounced a few ideas back and forth and decided that Tumblr was the way to go. We didn’t want to create a Tumblr that uses other people’s images and spoofs celebrities but we wanted to create and post original content that had both of us in it. So we came up with a talk show concept. Besides the plaid theme, which quickly became a “dress code” for the show, we needed another twist to set us apart from the thousands of talk shows that are out there.

So we decided that we shoot the entire show on iPhones. Not only that, but we would also make each guest shoot us, the hosts, on his/her iPhone (we always have an extra iPhone handy in case our guest is not part of the Apple club). That added a very interesting aesthetic and dynamic to everything and people started responding very positively to that. It also made us completely independent from camera crews, lights, mics, etc.

CBM: How many plaid interviews have you done so far? And with whom?

MK: We just launched two weeks ago so there is not much to see yet on the site, however the interviews we did manage to complete are with some very cool creatives: Josh Johnson from Transonic (music composer, sound engineer), Joe Cummings (actor, singer), Diana Falzone (show
host, relationship expert), and we are now editing our third episode which will be posted later this week. Our commitment is to do at least one interview per week, besides posting other things (videos, images).

CBM: How do you pick your plaid interviewees?

MK: We like a wide range of creative people. Actors, singers, models, various artists, hosts, etc. We prefer people who do more than just one thing or who are incredibly good at what they do. We use our
connections to get them on our show so it’s mostly “Hey man, I know a guy who knows a guy who can get us in touch with….” Our caliber of guests is becoming more and more interesting as the show progresses and we are now getting ready to interview the founder of a very successful men’s lifestyle site based in NYC.

CBM: What’s been revealed to you about people who wear plaid after shooting these interviews?

MK: Well, some actually don’t wear plaid like Diana Falzone for example. She had to dig up a plaid shirt just for us because it is a requirement for the show. She said she doesn’t wear plaid at all. So
we totally appreciate that she did it for us! However, we mainly hear “plaid is everywhere!” from people we approach. Or “Oh my God I freakin’ LOVE plaid!”. We did some research on the trend before we started the show and what we found out was that many girls love it when a guy wears plaid.

We used Twitter for this. You can simply search for “plaid” as the main keyword. Select “all” in the search drop-down box and look at all the tweets with the word “plaid” in them from the last 2 hours or so. There will for sure be some that say “oh my gosh, when a guy wears plaid it just makes him look so much hotter!”.

I am not making this up. Try it! So we realized that plaid is more than just a trend or something so-called ‘modern’. To answer your question: this is something we have also learned from the people we
interview. They agree. Plaid just adds a little somn somn.

CBM: When did you start wearing plaid? Do you remember what your first plaid shirt looked like?

MK: I have never been a plaid fan until about 2 years ago. I always wore plain shirts only. It was simple and I liked that. But once the plaid bug got to me it was all over. I now own about 17 plaid shirts and I’m proud of it. My first plaid shirt was subtle. I planned to transition my look from plaid to plaid as smooth as possible. The plaid then became more noticeable, bigger patterns, stronger colors, and now I can’t get enough of it.

CBM: Who looks better in plaid, boys or girls?

MK: I feel that plaid is a guy thing. Who looks better? I don’t know. I wish more girls would wear plaid but I just don’t see it enough on girls. Not sure why. Guys make it work for sure.

CBM: What are your favorite stores to buy plaid?

MK: I’m going to go with GAP and OLD NAVY. They have a wide range of plaid and I like that. BTW, they reached out to Andrew and I. They saw our kick-off video “Plaid Rap” and shared it on their official Facebook and Twitter accounts. It was the ultimate payback for us.

And in case you haven’t seen their viral rap about plaid, watch it here: