Welcome to our twenty-fifth Tumblr Tuesday, where every Tuesday we celebrate our love of Tumblr by interviewing the mastermind behind a new blog. Tumblr, a New York City based startup, is like the FFFFound for the rest of the world. It’s as shareable and fast-paced as Twitter but populated with more in-depth text and rich images.

In January, we announced that Tumblr serves 120 million people and 15 billion pageviews every month! But Tumblr’s founder and CEO David Karp admits that one area the blogging network hasn’t performed well enough at thus far is content discovery – which is what our weekly column Tumblr Tuesday is all about.

First, let me ask you a question. Do you know what a Shake Weight is? It’s basically a modified dumbbell that vibrates to work out muscles. But to promote the Shake Weight, the creators made a series of ridiculous videos that made the device look very sexual. It was only a matter of time before the infomercial clips went wildly viral. 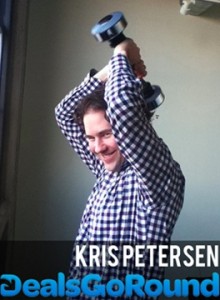 So for this week’s Tumblr Tuesday, we met the evil genius behind the blog: CEOs With a Shake W8, which is ladies and gentlemen, exactly what it sounds like. CEO’s With a Shake W8 is a collaborative project hatched by Kris Petersen, the CEO of DealsGoRound and his social media team. When they’re not running all over Chicago with Shake Weight and camera in tow, they’re helping consumers organize and re-sell the billions of dollars of daily deals they own and love.

CBM: How in the hell did you think of starting this Tumblr and WHY?!

Kris Petersen: We were having a little fun with Shake Weight on Twitter and the next thing we knew, a Shake Weight showed up at our office. The agreement was that I, as the CEO of DealsGoRound, had to take a picture with it. We decided to have some fun with their gesture and go a little overboard. The next thing we knew, we received a few inbound submissions and requests to participate for the Tumblr!

CBM: Where are all these Shake Weights coming from?

KP: More people own Shake Weights than you might think. 7 minutes with this thing burns the same energy as 42 minutes of working out. Using simple math, I work out the equivalent of twelve hours a day! American CEOs are no dummies. If you don’t own one, you should!

CBM: How many CEOs do you have up so far?

KP: We’ve got around 20 CEOs and founders who know how to have a good time. If you’re a CEO/founder and reading this and thinking, I need to be on here, please submit you picture with a Shake Weight to [email protected] (keep it clean)!

CBM: Where are all these CEOs coming from?

KP: Chicago has an amazing startup community! DealsGoRound is funded by Lightbank, so we started there. Friday evenings usually entail a happy hour thanks to our friends at BenchPrep and when the good times start, the ShakeWeight is a CEO/founder magnet! We also loaned out our Shake Weight to Sandbox Industries in our first ever Shake Weight Loaner program so their CEOs could participate int he fun.

CBM: Why are Shake Weights so funny to you?

KP: Shake Weights are funny to everyone until you try to use one. It’s like my tap dancing class in college. I never felt so uncoordinated in my life. BUT, once you get the hang of it, you can feel the burn! By the way, I got an ‘A’ in introduction to tap dancing. Twice.

CBM: Have you ever used a Shake Weight?

KP: I never laid hands on a Shake Weight until one showed up on my desk. No I can’t put it down.

Full Disclosure: I too own a Shake Weight.