The Huffington Post first unveiled its video-streaming network, HuffPost Live, back in August. And in a Google+ post earlier today, co-founder Arianna Huffington lifted the lid on its new iPad app, which hits the App Store today.

Just to recap, HuffPost Live is aimed at its community of readers around the world, who can join in the conversations via a webcam. The network launched with ten hosts, and eight hours of live programming from New York and four hours from LA each weekday. When live broadcasting ceases, highlights are aired. 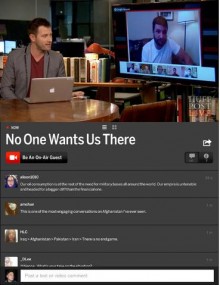 With its iPad app, this opens up HuffPost Live to the mobile masses, and interestingly those with an Apple TV can tap the joint functionalities of these devices to comment and follow conversations on their iPad while using AirPlay to ‘throw’ the HuffPost Live video feed onto their TV screen.

Similar to the Web-based incarnation, the iPad app lets users watch and participate in the video-based conversations, and post comments.

The Huffington Post was co-founded by Arianna Huffington, Kenneth Lerer, Andrew Breitbart, and Jonah Peretti in 2005, accruing a large online readership which led to its eventual acquisition by AOL in February 2011, for a whopping $315m.

HuffPost Live is available to download for free now.