Apple’s ‘Spring Loaded’ 2021 event was full of interesting announcements, including some long-awaited ones (AirTags!) and some welcome surprises (rainbow iMacs!). Let’s dive into the best of the new.

Although we knew iPads were expected at the event, the biggest announcement was arguably the unveiling of a new suite of iMacs with a sleeker, thin-bezel design and, most importantly, a whole array of colors. I mean, just look at these things!

I’m very excited that colorful desktop computers are about to come back into vogue, but the new iMacs represent a big jump in performance too. Unsurprisingly, they’re powered by Apple’s custom M1 chip, which means they should offer a major performance boost compared to the previous generation when running optimized software.

Apple also improved the sound on the new iMac with dual force-canceling-woofers and separate tweeters. The device also has three microphones and a Facetime HD camera with AI enhancements for your Zoom calls.

But let’s not kid ourselves, you’re just going to get one of these for the colors aren’t you?

The new iMac starts at $1,299 and will be available for pre-order April 30 for availability in late May.

Finally. We first heard about AirTags way back in April 2019, but they are now a reality.

AirTags take things a notch above traditional Bluetooth trackers by showing you the exact distance and direction of your lost item, leveraging Ultra Wideband radio technology. They are also linked to Apple’s ‘Find My’ network, helping you locate lost items via other Apple device users who might come into range of the tracker.

Best of all, it only costs $29, which is pretty cheap as far as new Apple products go. Or $99, if you want four of them. AirTag preorders begin this April 23, and the tracker will be available April 30. You can even order them with custom engravings too.

By the way, Apple made a pretty great AirTag ad:

Apple continues to blur the line between the Mac and the iPad with the new iPad Pro. The latest generation of the device features the M1 processor as well, which Apple says provides a 50% CPU boost and 40% GPU improvement over last year’s model.

But performance updates were a given. More interesting is the use of Mini LED technology for the first time on an Apple device, although it’s exclusive to the 12.9-inch model. If you’re not familiar, Mini LED displays are essentially just fancy LED displays with myriad backlighting zones.

This means the LEDs that illuminate the panel can shut off independently across a variety of zones, helping it come close to the contrast of OLED displays, although it cannot shut off individual pixels the way the latter technology does. But for most content, it should be a major jump in performance.

The new iPads also support Thunderbolt/USB-4, an ultra-wide front camera that can track you as you move around the frame, and 5G connectivity. The 11-inch iPad Pro starts at $799, while the 12.9-inch model will set you back 1,099.

The iPhone 12 and 12 mini now come in purple. This is a good thing. Behold:

The spirit of Prince will be happy. Pre-orders begin Friday and it’ll be available April 30.

Apple stuck an A12 Bionic in the Apple TV for more processing chops and created a fancy new remote.

The beefier processor enabled a couple of interesting upgrades. For one, it can now playback HDR content at up to 60fps. But more interesting for those that care about picture quality is the ability to calibrate your display using the iPhone’s camera.

The remote now has a circular touchpad with clickable buttons framing it, and it’s made out of recycled aluminum. Most importantly, it finally gets a mute button.

Apple doubles down on Podcasts

Apple’s Podcasts app got a major redesign today, in which each show has its own dedicated page, with a new browsing function to make it easier to find new shows. 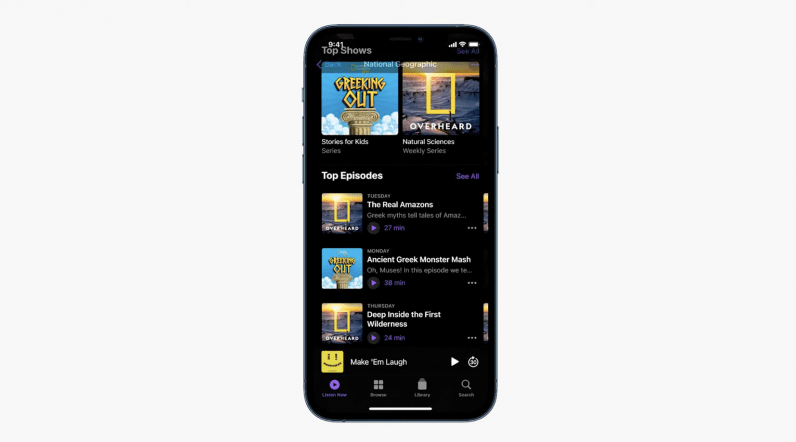 But more importantly, Apple also announced users would be able to subscribe to podcasts, helping creators be able to make some money off of their audiences. Some of the subscription features include ad-free episodes, early access to new series, and premium content.

The new design and features are launching in May.

Missed out on the event and have an hour to kill? You can watch the whole thing below or by going here.

Apple was even so kind to include timestamps so you can skip to the parts you’re interested in.