The BBC has introduced yet another standalone mobile app for UK smartphone users, this time focusing specifically on the weather.

Powered by Met Office data, BBC Weather joins BBC Sport, BBC News, iPlayer and iPlayer Radio in the UK broadcaster’s armory of native apps, but  unlike previous launches, this latest one will be available for both iOS and Android from the get-go. However, the iOS incarnation isn’t yet optimized for iPads.

We managed to grab a quick hands-on with the new BBC Weather app and, well, it offers pretty much everything you’d expect from such an app.

When you first launch it, it automatically detects your location and give you an overview of the weather conditions wherever you may be. While the Web-based version of BBC Weather can offer up to a 10-day forecast, this new mobile offering is limited to just 5 days, which will be sufficient for most people. You can also drill down for information on UV, pollen count, wind speed and humidity.

The iOS and Android apps are pretty much identical from a features perspective, though the latter also offers a homescreen widget for easier access, while NFC-enabled devices can also share favourite locations between handsets just by touching two devices together. 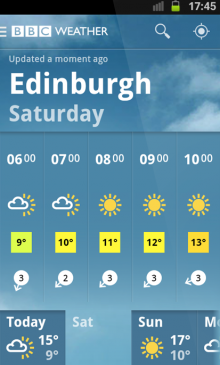 For UK locations, you can view forecasts by the hour for the next 48 hours, whereas towns and cities outside Britain are viewable by 3-hourly intervals. These predictions are scrollable independently of the rest of your screen’s content. You can add up to 10 locations (UK and abroad) to your own ‘favorites’ list too.

There’s no shortage of weather apps out there – Yahoo recently rolled out an all-new weather app for iOS, tapping Flickr to bring users’ weather-themed photos into the mix. And YoWindow recently arrived for iPhones too. But given the apparent popularity of the BBC as a go-to source on the weather, it’s perhaps surprising it hasn’t launched a dedicated mobile weather app before now.

Earlier this year, the BBC reported a record week for its online Weather product, with 20 million unique browsers over a seven day period. We’re told that there has been “a huge increase” in BBC Weather traffic from mobile devices over the last year

“We know that our audiences really want that at-a-glance forecast when they’re out and about, with the option of digging for further detail when they need or want to,” says Liz Howell, Head of BBC Weather. “That’s exactly what we’ve delivered, squeezing in all of our trusted data into an app that’s simple to use and looks fantastic.”

The new Android and iOS apps are now live in the UK app stores. No word yet on whether these will be made available globally.