Stephen Fry returned to audioBoo yesterday, knocking an earlier recording from Prime Minister Gordon Brown straight off the top of the Most Popular list.

At one stage the recording was attracting 60 listeners a second according to the audioBoo team.

audioBoo is an increasingly popular audio-blogging service, originally launched for the iPhone and now available via its website, from other smartphones and even through any phone via phoneBoo.

Stephen Fry made good use of the service following its launch, commenting positively about it on Twitter.

His usage faded in line with his well-publicised retreats from social media, although he briefly returned earlier this year to record second birthday wishes to the the startup service, which represented Britain at SXSW as part of the Digital Mission.

Yesterday, Stephen Fry returned to audioBoo with a Boo made in front of a live audience at the recording of first in a new series of his BBC quiz show QI. The brief recording features the audience shouting out a word which listeners must decipher and include in a tweet to @stephenfry.

Innocuous enough. However, the recording was enough to knock two more highly popular “Boos” from the top of the chart. Earlier in the day, Prime Minister Gordon Brown had recorded a brief election Boo for @inthecampaign. Elsewhere, @arseblog’s Boo summarising Blackburn’s 2-1 defeat of Arsenal was also riding high on audioBoo’s most popular list.

All three recordings demonstrate audioBoo’s increasing versatility as a broadcasting, reporting, blogging and even an interactive entertainment tool.

In follow-up tweets to Mark Rock, CEO and founder of audioBoo, Stephen Fry commits to recording a new Boo at the recording of each of the 16 editions of the latest QI series. 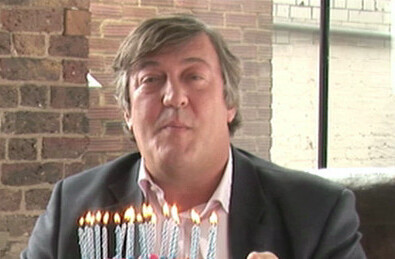