Logitech G recently launched its Color Collection of gaming and computer accessories and all I can say is: Hallelujah, hallelujah my prayers have been answered.

I’m sick of black and gray tech. I have a sneaking suspicion the sea of dim, dark devices in my home is having a negative impact on my mental health – especially since the quarantine began. All I see when I look around is darkness punctuated by flashing lights. It’s like my home is the most boring space ship ever made. Darth Vader would love it here.

Well, he would have. These days I’m sporting some flashier gear thanks to Logitech G. The Color Collection, as advertised, is a series of gaming accessories – a headset, a wired mouse, a wireless mouse, and a loosely-related wireless mechanical keyboard – aimed at consumers with a penchant for flair.

The most exciting part of the collection is the excellent G733 wireless gaming headset ($129). Not only is it gorgeous, but it’s a worthy and well-featured addition to any gamer’s gear lineup. Let’s start with the looks.

The new headset and both mice come in Logitech’s new pink, blue, or lilac and the keyboard comes in white. I opted for the lilac because the pink was a bit too understated for my taste and the blue seemed… safe. I was not disappointed.

I cannot think of a better looking headset than the G733. The new colors pop and I’m over the moon with the lilac thanks to some very smart decisions by Logitech G. First off, they opted for a conservative design that focuses on what’s most important: sound and comfort. Then, whoever was responsible for the aesthetics got funky with it.

The headband is reversible and you can buy other designs and colors for further customization. The microphone, which is detachable thanks to a clever plug-in design, can also be gussied up with optional covers.

But what I like most about the design of the G733 wireless headset is how it manages to stand out from the crowd with functional design. This isn’t a headset trying to look weird or quirky in a sea of flashing neon doodads. In fact, I’d say this thing turns heads without turning people off. 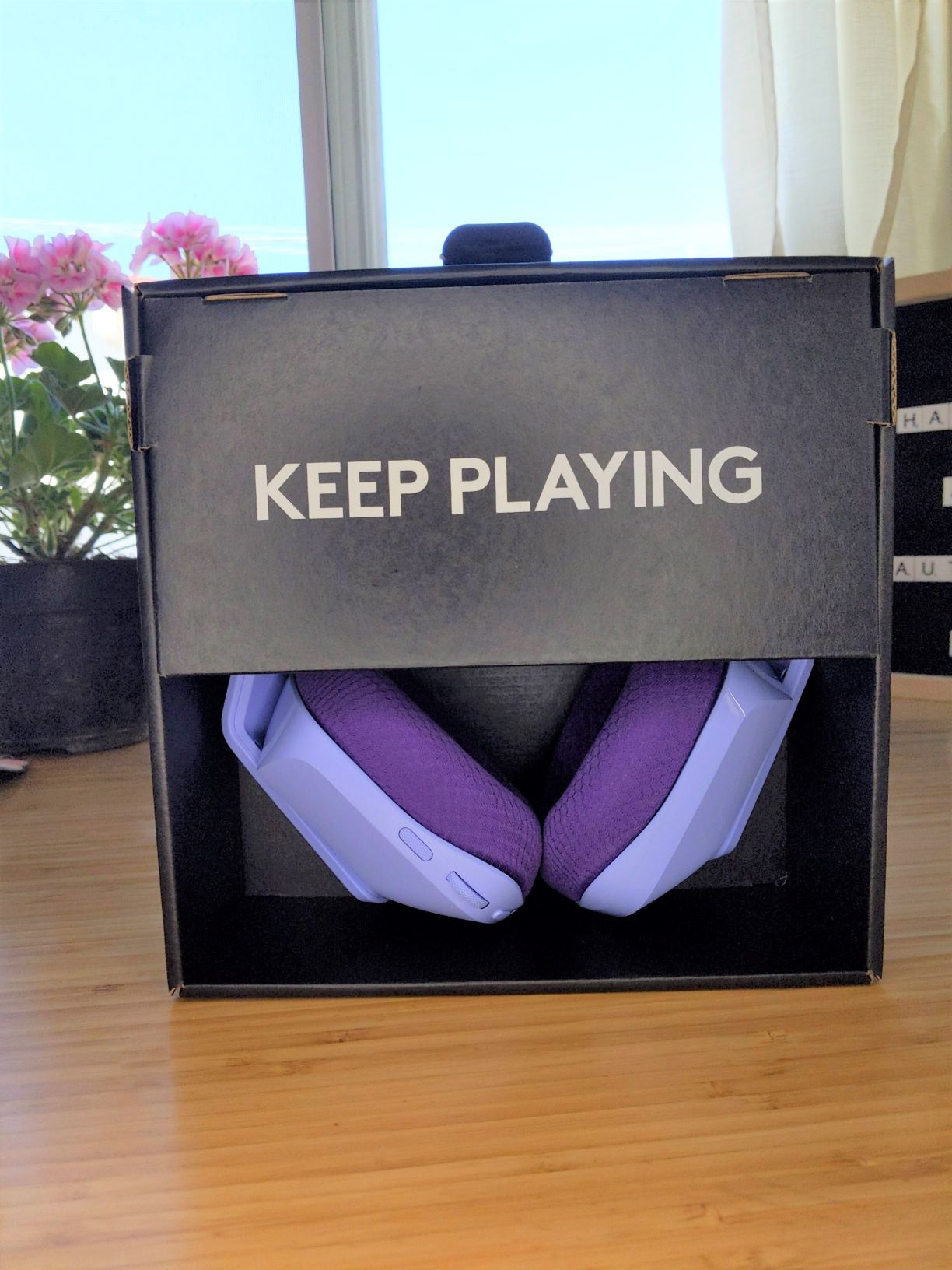 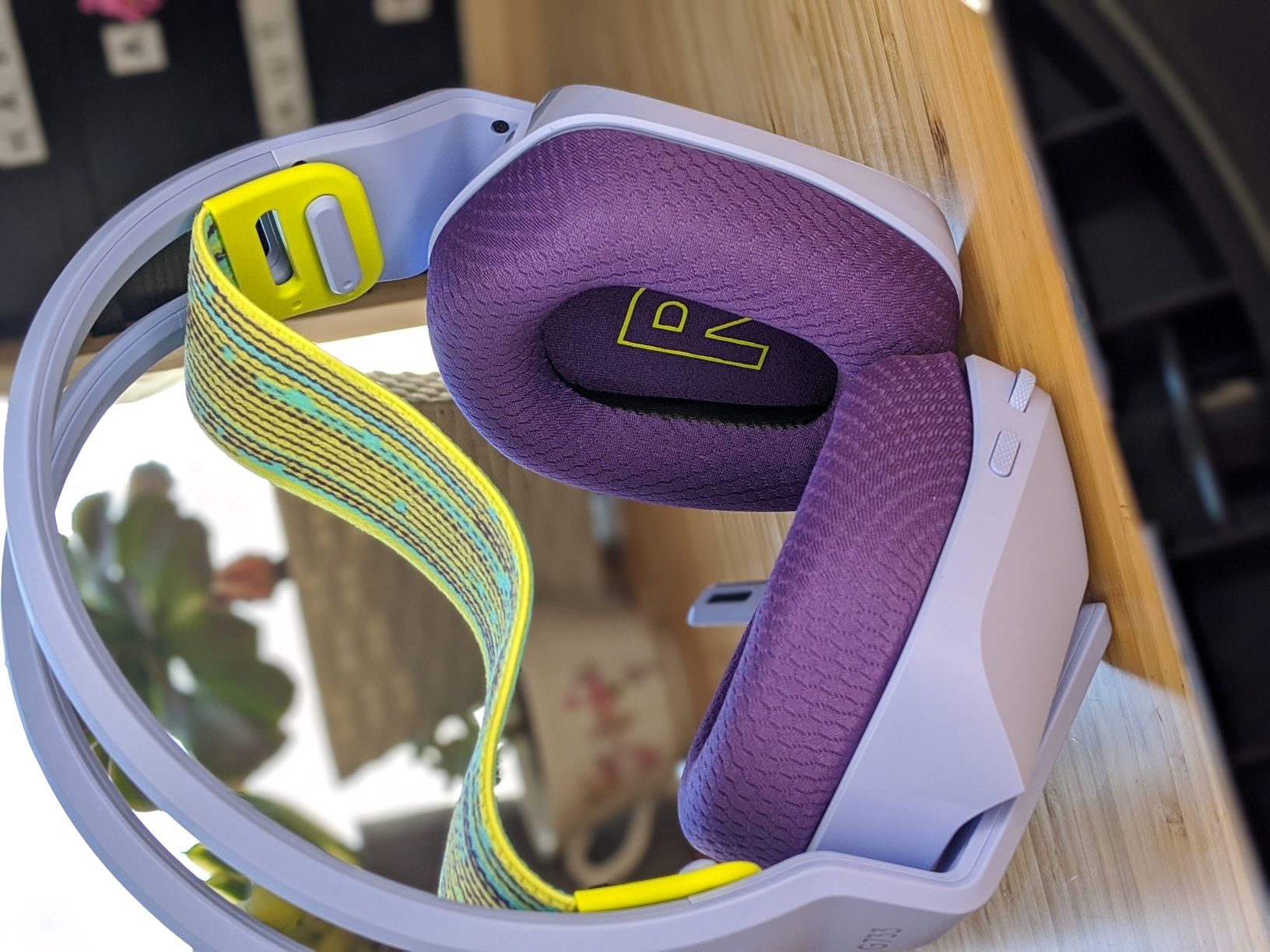 However I’m not about to fork out $129 for a headset just because it’s purple and that makes me happy. I’d rather have an ugly one that works well than a pretty set of mediocre cans. Luckily, Logitech G delivers the goods in both areas.

You can check the specifications here at the Logitech website, but the quick and dirty version is that the 40mm drivers and Blue (yes, that Blue) microphone are both fantastic. I tested the G733 with games I’ve found it advantageous to have a decent headset in (Modern Warfare, Shadow of War, and Dead by Daylight) and I also spent a few hours listening to music with it.

I can’t speak to the quality of the mic personally, but those I chatted with remarked that my headset was clearer than it’s ever been – my daily driver is an Alienware headset from a few years back, so that’s pretty high praise.

And as far as sound quality goes, I found it to be a mixed bag. The G733 shows off its chops when playing blockbuster games. Call of Duty sounded as good or better on these cans than any other headset I’d used and I found the low-end a bit more clear when playing Dead by Daylight – a game where the sound matters more than most. It might be a coincidence, but I had some of my best games ever in both titles wearing this headset. Music, on the other hand, was where I found it to be just okay-to-good.

Don’t get me wrong, you can rock out with the G733 cans. They’re loud and clear and they sound good. But at the same price point you could get a pair of Sennheisers or Audio Technicas that would blow these out of the water. However, those would be flat headphones and not a balanced gaming headset with a microphone. Compared to what’s out there right now in gaming headsets, the G733 competes any similar priced offering.

At the risk of over-simplifying, the main problem with these headphones is a small sound stage. When I listen to classic rock or modern pop it feels like the instruments are all crammed into a small space instead of spread out over a stage I can visualize in my head. But nobody is buying a lilac Logitech G gaming headset so they can listen to the new Deftones album. If you’re a gamer, these are more than enough to give you an edge.

Most importantly: the G733 is, hands down, the most comfortable headset I’ve worn. They’re light and comfy. Normally I talk about how long it takes to fatigue wearing them – for reference, my Alienware headset starts bugging me after about 60 minutes and my favorite headphones of all time, the Neumann NDH 20s, start getting heavy on me after a couple of hours. But I can’t bring that up here because, honestly, I could wear the G733’s all day long.

I’ve spent the bulk of this review talking about the new G733 because the other Color Collection offerings are a bit less novel. But that’s not to say they aren’t worthy. The G203 wired gaming mouse and G305 wireless gaming mouse are clear-cut winners.

Logitech sent a wired G203 ($39.99) in lilac and wireless G305 ($59.99) in white for me to review. If I’d had it my way I would have wanted a lilac wireless, but I’m actually glad the wireless mouse and the G915 tenkeyless wireless keyboard showed up in white.

It seems like a good idea to buy matching accessories, but Logitech G knew something I didn’t: good design aesthetics start with a good pallette. All of the colors are meant to look good together. And I have to admit, that keyboard is stunning in white and it looks good next to both the white and lilac mice I reviewed.

The mice were good bordering on great. I’m not much of a keyboard and mouse gamer, so my metric is whether or not I’m constantly aware of my mouse or if it fades into the background like a good gaming accessory should.

Both met the purpose well. I do have big hands and will be spending the majority of my time with larger mice than these, but for those with regular-sized mitts both mice are great gaming options. You can get the full specs here on Logitech’s website. 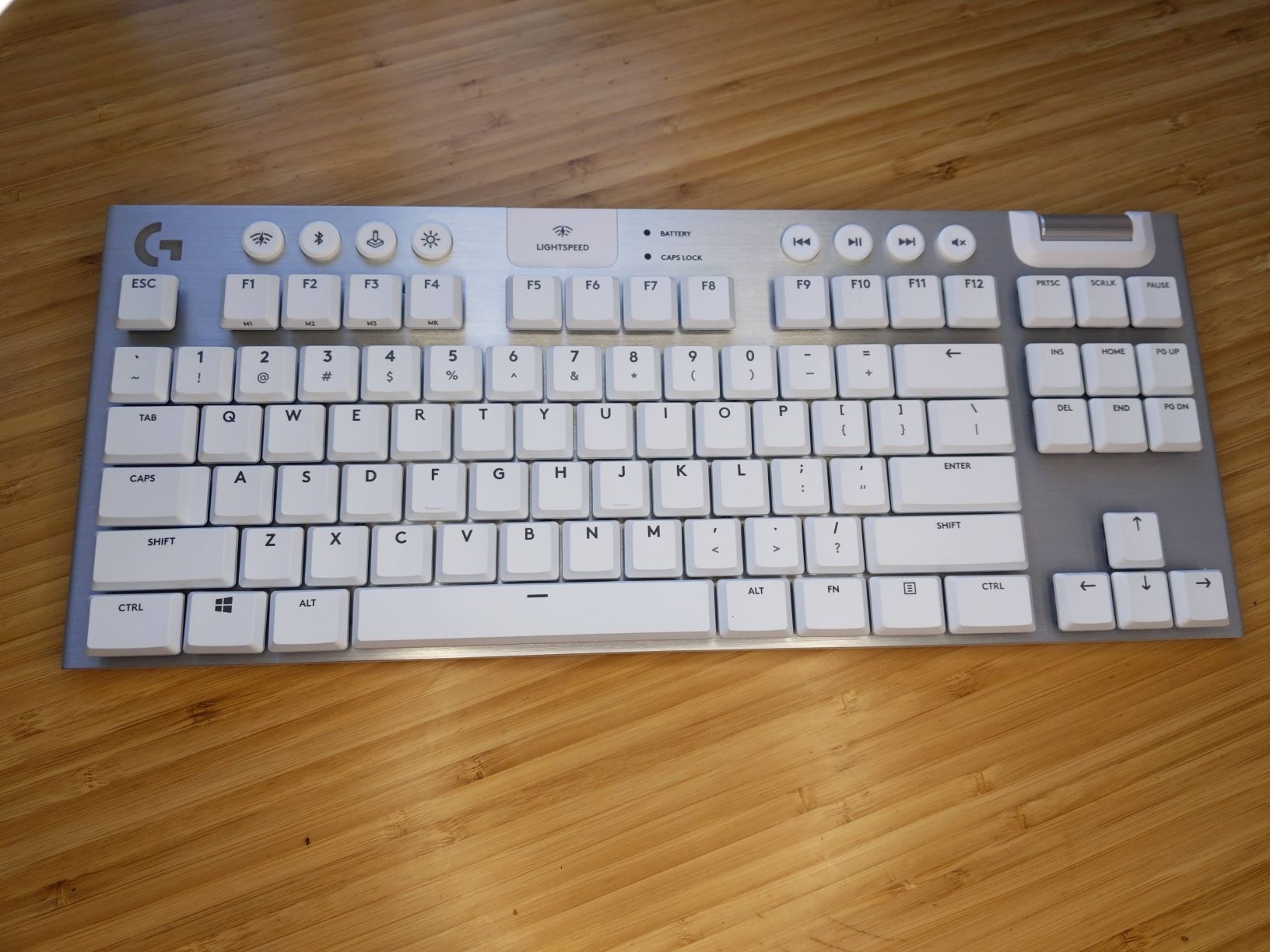 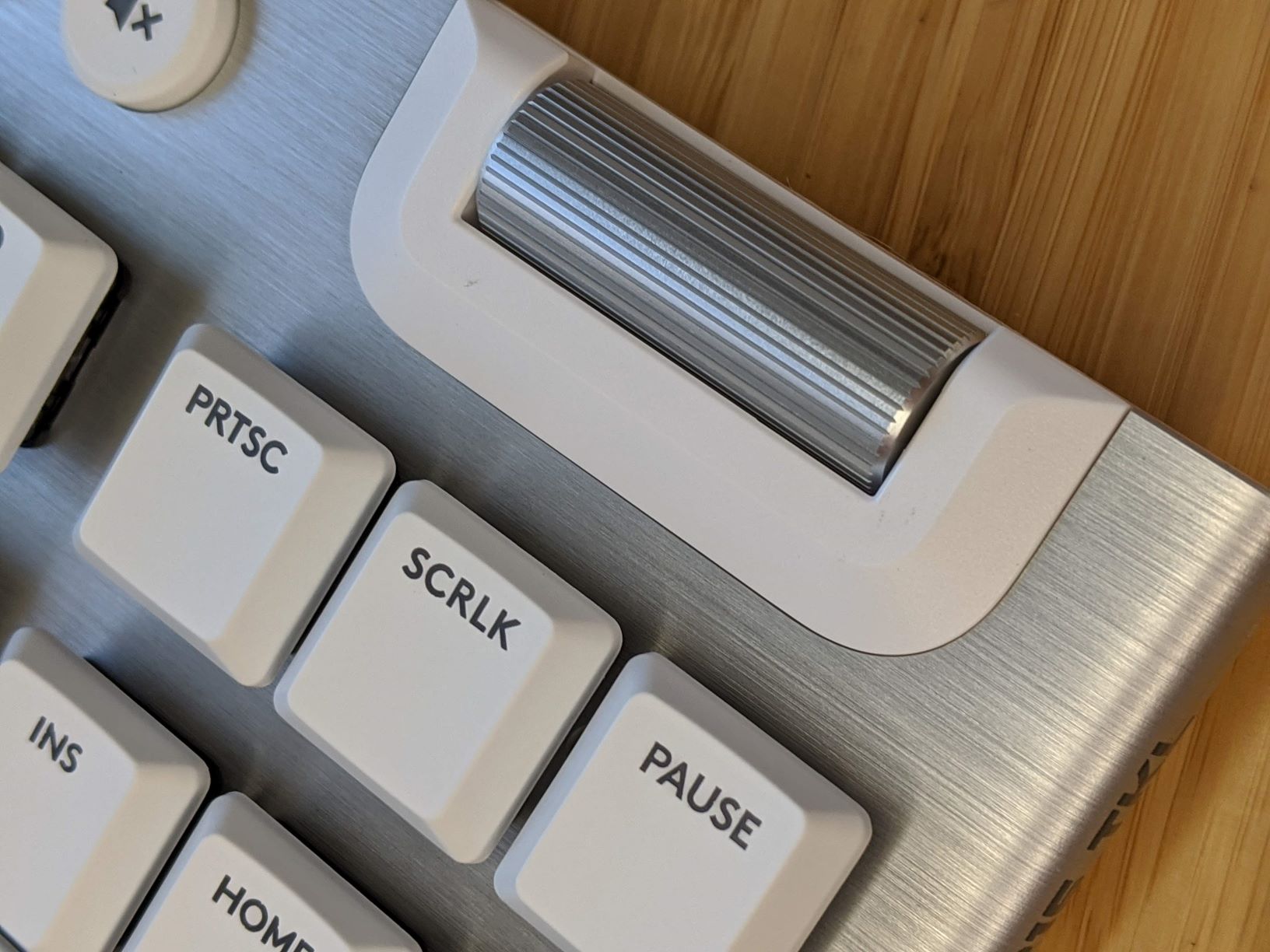 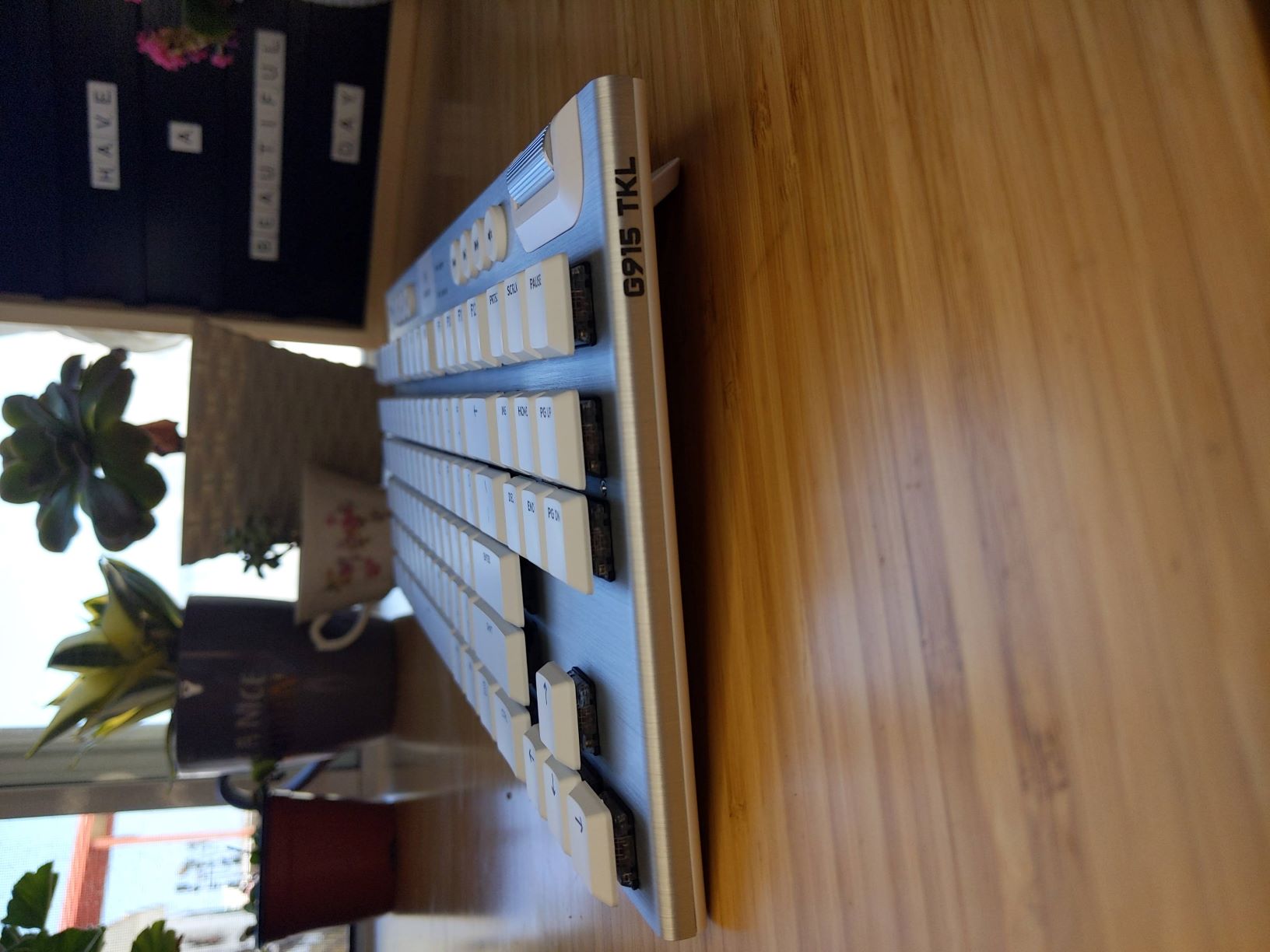 And that brings us to the G915 wireless tenkeyless keyboard ($229.99). This isn’t a new release from Logitech G and it doesn’t come in lilac, blue, or pink, but it looks exceptional in white and was surprisingly good. I’m not a professional gamer, but I do write for a living and I’m pretty picky about my keyboards.

This gorgeous, slightly understated keyboard is a winner. I’m not sure why Logitech G chose to market this to gamers – most gamers want the number pad. But for my purposes – someone who typically games with a controller and doesn’t need a number pad for work – this is the bees’ knees. I get a full-quality mechanical keyboard that’s pleasantly easy to type on (it pumped me up about 5 wpm) that fits just about anywhere. I’m in love with the form factor and crisp, beautiful buttons on this keyboard.

The bottom line here is that Logitech G is gambling that there’s more people like me out there. People who don’t want to wallow in darkness because the “majority” wants dark gadgets. Luckily the company has the wherewithal to make something bright and colorful without it becoming a bargain niche product.

I love the Logitech G Color Collection. I wish it came in more colors and I’d love to see the G team expand into even bolder choices. But the bottom line is that you’re not just getting pretty devices, you’re getting high quality gaming accessories. It just so happens they’ll also look fantastic in a live stream. I heartily recommend each of these products.