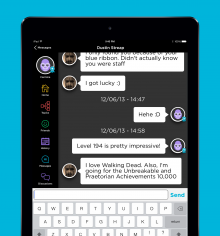 There’s now a new version of QuizUp, the game that lets you challenge friends and virtual strangers with your general knowledge, designed specifically to make better use of the screen real-estate offered by an iPad.

While QuizUp was already available for iPhones, it seems the developer Plain Vanilla wanted the experience to be made all the more accessible and enjoyable for users on the slightly larger displays afforded by an iPad. And why not, just one month after launching, the game claimed more than 5 million users . Now one month later again and the company says that 10 million people now play it.

While mostly the same experience, the company updated the app with a redesigned Topics page, added emphasis on your friends in the overall rankings and a few other bug fixes, as well as optimizing the layout for larger screens.