As Nokia lifted the lid on its new Lumia 1020, a 41-megapixel beast of a smartphone, a number of app-related news nuggets piggy-backed on this announcement in New York earlier today.

First up, Path – the private social network with a 150-friend limit – has revealed that due to uber-popular demand, it’s finally coming to Windows Phone, working directly with Nokia to make it happen. 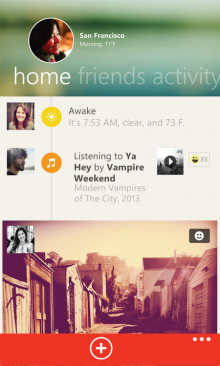 “This is a platform that we are especially excited to build on because it has been one of the most requested platforms by our users from all corners of the globe,” the company said in a blog post.

“We’ve worked closely with the team at Nokia to build Path for Windows Phone, with a special focus on the new Nokia Lumia 1020 device.”

Indeed, photo-sharing is a core aspect of Path as a social network, so the 1020’s 41 megapixel camera, alongside Nokia’s Imaging SDK and premium filters, should work well for it. No date has been set yet for the launch.

However, there’s still no sign of Instagram. Fans of retro-fied photo-filter apps will have to make-do with Hipstamatic, which is finally arriving on the Windows Phone scene too exclusively for the Lumia 1020, just a few months after it launched a photo-centric social network on the platform, called Oggl.

As the Verge have just confirmed too, Twitter-owned Vine will be arriving on Windows Phone 8, which is a massive scoop for the platform, given it only just landed on Android last month.

The other big piece of app news for Windows Phone 8 users today is that Flipboard, the news aggregator/magazine, will be coming too – though no dates have been specified yet either.

These are significant additions to the Windows Phone ecosystem, given that most concerns voiced against jumping on board with the platform relates to the lack of apps.

If Nokia and Microsoft can continue to work together to create impressive smartphones, while encouraging the big dogs from the app world to join, they stand every chance of gaining at least some market share back from iOS and Android.