Earlier this month we covered a new app for NYC’s largest gallery: the subway system. Yes, NY’s subway system is quite the source of fine art, and the app, built by Meridian, showcases the Arts for Transit program, which has been active since 1985.

That app is certainly impressive, but there were concerns over the fact that Meridian wasn’t NYC-based, with some commentators wondering why the city didn’t seek out it’s own talent to get the job done. Now, it turns out there were a few really good reasons for this, as Meridian is not only leading the way for indoor GPS app development, the team also developed the app free of charge for the sake of art and has done so for museums and galleries across the country.

But after speaking with the team, a much further-reaching plan emerged from the Portland based company. The team is building what I’d call a content management system (CMS) for locations, and it’s awesome.

Meridian’s apps make it simple to navigate new places, like an indoor tour guide. The team turns blueprints into aesthetically pleasing maps that help users find their way. Beyond way finding, Meridian can also tap into inventory systems, making it easy for to find things like the right book in a bookstore.

Stores, parks, convention centers and venues could certainly build this sort of system themselves, but it would be extremely expensive. Nowadays, most developers wouldn’t bother rolling their own blogging CMS just for the sake of repeating work that’s already been done. Similarly, managing digital representations of places may soon mean tapping into Meridian’s location-based platform. 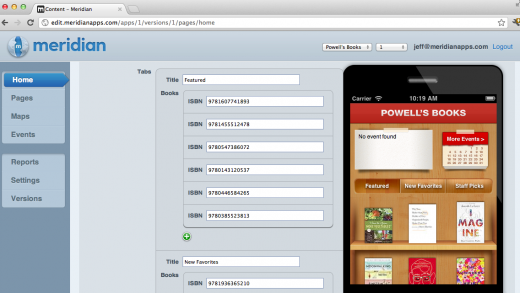 So far, the team has worked with the likes of NY’s MTA, The Oregon Convention Center, Balboa Park, Portland Timbers, Powell’s Books, California Academy of Sciences, The American Museum of Natural History and Portland Art Museum, plus plenty more projects are already underway. What’s really exciting, though, is what will happen as Meridian begins opening up for more and more third-party developers.

We’ll keep our eyes out on how the exciting platform develops, especially because I can’t help but believe that their really should be a CMS for places. If you’re interested in learning more, definitely check out the link below.

You may also want to read: NYC just built an app for finding art in its largest gallery: The subway system