As NYC becomes increasingly in-tune with technological innovation and the startup scene, it’s becoming less and less surprising to see the city, even departments like the MTA, embracing all things tech. Just last week we saw NY taxi cabs outfitted with slick Square payment systems and iPads, and before that we noted the new initiatives to bring WiFi and cellular reception into our beloved, sticky and often uncomfortably humid subway stations.

Now, we’ve just heard wind that the MTA is working to bring a public art app to subway riders, showcasing the Arts for Transit program which has been active since 1985. You may not have known this, but NY’s subway system is quite the source of fine art. As Art Beat explains, “for many years the most underrated art museum in New York City has also, oddly, been the one with by far the most visitors, millions a day: the subway system.”

While I’ve kept an eye out and noticed some art being showcased in the city’s underground hollows, there’s never been a simple way to discover pieces all across New York.

To solve this problem, the MTA has been working with Meridian, a mobile software company based in Portland (not sure why a NY firm would’t suffice). According to the NY Times, the free app will be available soon “to serve as a guide to the 186 permanent works installed throughout the stations, and to a few dozen more in the Metro North and Long Island Rail Road systems.”

According to the Wall Street Journal, Meridian actually developed the app for free, and will split profits 50/50 with NYC if advertisements end up being included.

More, from the NY Times:

The app – which Sandra Bloodworth, the director of MTA Arts for Transit, says is still a work in progress – provides information either by subway line or by artist, from the abstract painter Al Held to the author and illustrator Yumi Heo, with Roy Lichtenstein, Elizabeth Murray and Sol Lewitt in between. The app also provides detailed maps of some of the larger stations and guided turn-by-turn tours, along with short video and audio pieces about artists and their work. (It can be synced before descending into cell-phone dead-zone stations or used interactively with location-based help at above-ground stations and ones that have been wired, like the 14th Street station on the A line in Manhattan.)

“In a setting like the subway,” Ms. Bloodworth said, “art really does something. It gives a certain amount of dignity to your ride and your day. And this is finally going to be like having the whole collection in the palm of your hand.” 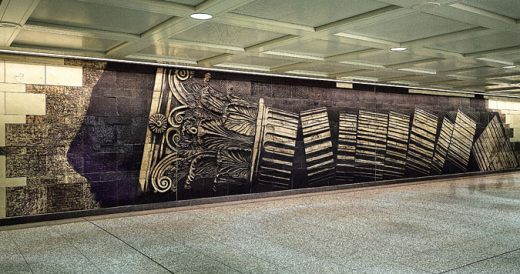 While the app is not yet available, you can take a sneak peek at the design on Meridian’s site. 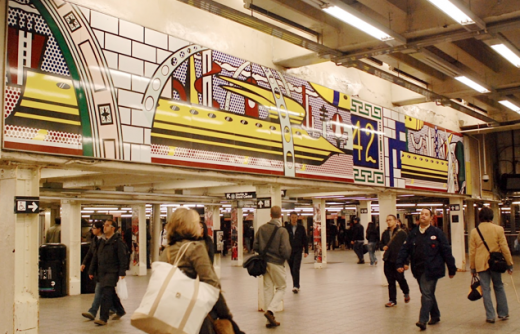 I honestly had no idea that the works of acclaimed artists like Roy Lichtenstein were even in the subway system, which is exactly why such an app is very necessary. Now, all we need is a little extra cleaning, non-stop WiFi, cell reception and a dehumidifier the size of Godzilla and I’ll be set for life.

Update: You can download the app here, free for Android & iOS. You can also see more subway art here. 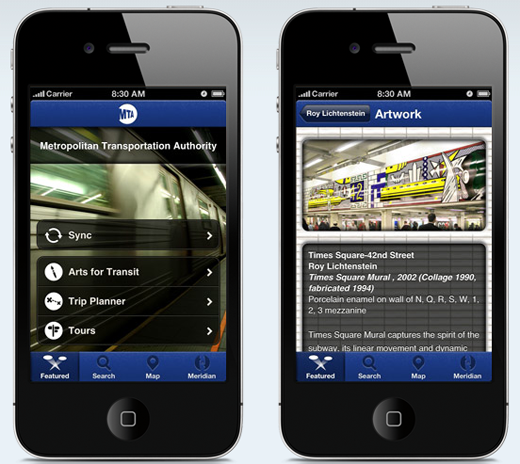