Apple today put its hotly anticipated iOS 8 mobile operating system into the hands of its toughest critics: the users, and iPhoneographers particularly have been champing at the bit to discover how it all works on the camera that’s always in their pockets.

Photographers and videographers have two main points of entry within the mobile operating system: the Camera app and the Photos app, with iCloud increasingly playing a dominant role.

Here’s the lowdown on updates — both major and minor — that will become obvious the minute you upgrade your iPhone’s OS. While Apple has already offered plenty of details about photography improvements in the new iPhone 6 that will arrive on Friday, the following observations are based on running the brand new OS on an older iPhone 5.

Even if you don’t choose to upgrade to one of the new iPhone 6 models just yet, iOS 8 will make your older photo utilities more capable and flexible. I found performance easy and smooth on my phone with no glitches at all.

Separate focus and exposure: The iOS camera always had a tap-to-focus and an exposure-focus lock feature, and it still has those features. However, with iOS 8 you can independently tap to set the focus and then adjust the exposure separately. Swipe up or down on the focus box, or pretty much anywhere on the screen, to change the exposure of photos when shooting on the iPhone, and use it in conjunction with any other camera feature available.

Time-lapse: Last year, owners of a shiny new iPhone 5s got to romp in the time-shift playground with the camera’s slo-mo video feature, but owners of the 5c and older models were left out of the fun. iOS 8 now adds a different, and easy-to-use time-lapse mode to the camera carousel that even works on older phones (but alas, still no slo-mo). Just point your phone at a subject, hit the red Record button and the app takes care of the rest. Unlike the slo-mo video feature, there’s no way to tweak the results, but it’s cool, anyway.

Timer mode: There’s a new timer function for photos that can be set either to three or ten seconds. Just tap the shutter button and a numerical onscreen countdown begins, letting you set and frame the scene in whatever way you choose. This feature works with either camera and winds up being pretty convenient for selfies, in case you’re interested.

The Photos app is comfortingly familiar. Photos are still organized by Years, Collections and Moments, just like in iOS 7. The new iOS also maintains a function for privately sharing and collaborating on albums with friends and family.

With iCloud enabled, any photo you shoot and store in the phone’s Photos app is automatically uploaded to iCloud, where it is stored in its original format and resolution for viewing anywhere. The new Photos app for OS X, which will arrive in 2015, will also have that feature. 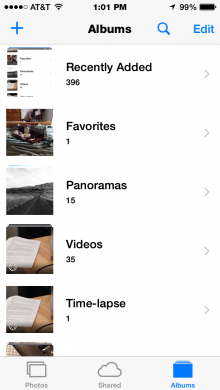 Smart photo albums: The iOS albums interface has always automatically added separate app-based albums (and sometimes fails to delete them when they are empty) in addition to the app’s default Camera Roll.

With iOS 8, users will bid the Camera Roll a fond farewell because it’s now been replaced with the Recently Added folder. There are also new Recently Deleted, Time-lapse and Favorites folders. The Recently Deleted folder holds on to discarded images for 30 days with a countdown of how many days are left prominently in each frame. Camera Roll became, over the years, part of the lexicon of iPhoneography and the term just has that ring, unlike Recently Added. I suspect people will continue to refer to the Camera Roll for years to come. 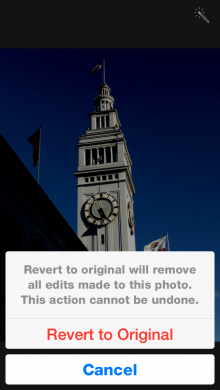 Non-destructive editing: With iOS 8, once you edit a photo, changes are saved to the collection as if it were the original — unlike iOS 7, which saves both the original and the edited version.

To get the original image back, you have to open the picture, tap Edit, then tap Revert. While some people liked the fact that the original image was preserved after editing (I did and still do), copies take up space. Photos lets you edit non-destructively while saving and making changes whether you save in iCloud or locally on the handset.

Crop, straighten, rotate: The Photos app in iOS 7 had a crop tool, but with iOS 8, the app also has an elegant and intuitive straighten function in the form of a gyroscope-based tool, last seen in Apple’s iPhoto for iOS app. The straighten tool automatically reads the photo and makes its own adjustment — or not — and then you can tweak it. A new rotate button easily switches photo orientation.

Exposure, hue, and monochrome: The iOS 8 version of Photos tears yet another interface page from Apple’s mobile iPhoto for iOS app in offering three types of slider-based adjustments that you can apply separately and concurrently: Light, Color and B&W. Within those selections, there is a list of additional edits you can apply in sequence. 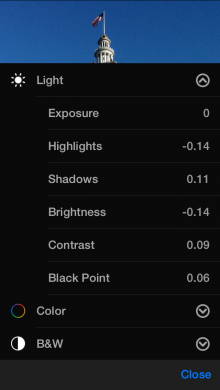 Light gives you adjustments like exposure, highlights, shadows, brightness, contrast and black point. Color gives you saturation, contrast and cast. B&W gives you Intensity, Neutrals, Tone and Grain. Tap on each major category to see the choices it offers, then tap on specific edits to get their adjustment interface. Tap the Done button when you’re finished. 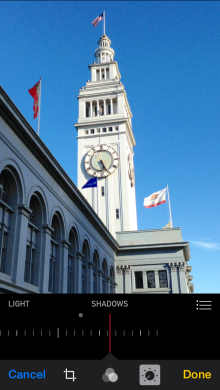 As with the previous iOS version, you could choose a universal improvement via the Magic Wand that lets the Photos algorithm decide how the image looks best. While that works sometimes, most people would prefer the more granular approach that iOS 8 delivers.

All edits are non-destructive, and a Revert button will allow you to restore the picture to its pristine state, even after you saved it.

Hide images: In the past, if you didn’t like a photo or want it to be viewed, you had to delete it. With iOS 8, images and videos in the Photos app can now be hidden from the Moments, Collections and Years views.

Tap and hold the frame, which brings up a menu where you can choose to either copy or hide the image. Hidden photos are still visible in the albums view — in the Hidden album, of course.

Photo location: In the past, the Years and Collections view let you see where photos were shot either from your phone, or as geotagged imports. Now, iOS 8’s Photos app displays the photo’s location and the time of capture above the photo itself in the Moments view. 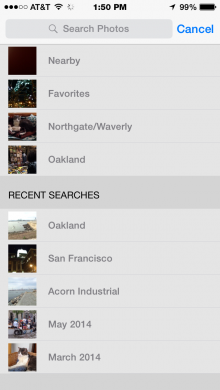 Favorites: There’s a new photo sorting feature called Favorites (designated by a heart) that lets you mark (and easily search for) your favorite photos.

Photo search: Search tools in iOS 8 have been strengthened to help you find particular shots without having to scroll through legions of photos. A new search field offers suggestions based on the location and date your photos were shot, giving you choices in how to search. 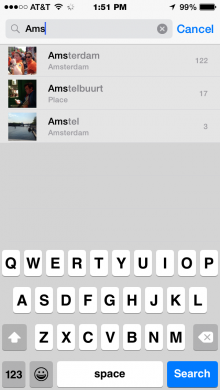 Tap on the search field to bring up categories such as Nearby, August 2014 and Favorites. If you know the date or location of the photo you seek, type it in to the search field and then select from the listing that appears.

Third-party filters: In addition to all of the editing improvements from Apple, expect more goodies from other vendors.

With iOS 8, developers can now build Extensions within the native Photos app to offer additional editing features and filters for both photos and videos.

With iOS 8, iCloud takes center stage, especially for photography, but the new iOS is flexible in how you can store and organize your photos. You can choose to keep photos on the phone, as in the past, and iCloud starts you off with 5GB of storage space for free. Unlike iOS 7 though, photo storage will count against the free 5GB offered with iCloud, so you will need to purchase more space if you go the iCloud route. If you do, all your photos will be available across all devices in the iCloud Photo Library. 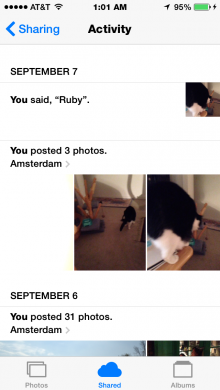 iCloud Photo Library: This is the effective replacement for Photo Stream, which lets you access all your photos with a consistent organization across all devices. Once enabled, the iCloud Photo Library automatically stores all photos and videos in iCloud at full resolution in their original formats, including Raw. You can find and download your images from your mobile devices and the Web while all adjustments and effects are updated and applied across devices. In 2015, when Photos arrives on Mac OS X, you will also be able to upload and view photos from your desktop or laptop computer.

iCloud Photo Sharing: This function lets you designate specific individuals with whom you want to interactively share photo albums, allowing all participants to view, contribute and comment on images. A shared album lets you control who (up to 100 of your closest friends) sees what pictures, and alerts participants when new images or videos are shared. Track shared albums in the Photos Activity view.

Apple’s new iOS 8 offers sophisticated new photography features for the new iPhone 6 and 6 Plus, but it also affords owners of older phones a much needed boost in functionality — and performance isn’t too shabby either. Note that iOS 8 will work on the iPhone 5 series as well as the 4s. Earlier models will not be able to upgrade to this version.

Also read: iOS 8 review: The real advances here are yet to come and iOS 8 is rolling out now for iPhone, iPad and iPod touch