At last count, I had 135 apps installed on my mobile phone. At its peak, that number might be somewhere nearer to 200, but every once in a while I have a spring clean and ditch the ones that I haven’t used beyond the initial review.

Of those 135 apps, I only use about half with any kind of regularity, and out of those perhaps less than half I would call my lynchpin apps. Practical, permanently useful and, ultimately, indispensable.

Just for the hell of it, I thought I’d run through the 20 or so apps that I use most regularly, and explain why I love them so much. Though a Samsung Galaxy S4 is my handset of choice, for the most part all the apps name-checked here are available on both iOS and Android. And they are available globally too. There are a few exceptions though, and I’ll make that clear here. 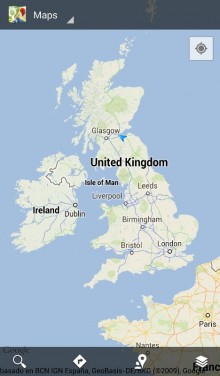 First up, the real core ones…

I was going to omit the real core apps – ones I check every 2 minutes. Why would I leave these ones out? Well, because you probably use them too and they won’t be surprising in the slightest. But I’ll give them a quick back-slap here anyway before progressing.

On my mobile phone’s homescreen, I have a tonne of folders with category-specific apps contained within (productivity, photography, music and so on). But a handful of apps have earned the right to be folder-free. These are Twitter, Facebook, Gmail, Google Maps and Play Store – my core apps.

Twitter and Gmail, well, I pretty much monitor constantly; Facebook I peruse once every couple of hours; and Play Store is where I go a-lookin’ for lots of cool new apps to write about. Some might say it’s not really an app, but I disagree.

If you’ve used Google Maps before, then I don’t need to give it much of an introduction. As a London-dweller, it has saved my bacon on more occasions than you could ever imagine. Plus, many third-party apps I use rely on it too.

Oh, and there is actually another app that takes pride of my place directly on my homescreen called Hive Settings (see here for more details), which is an Android-specific app that lets me access my handset’s setting with ease. 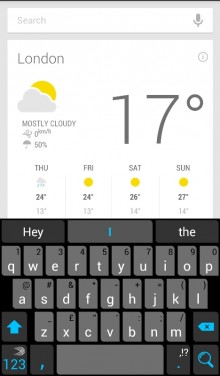 While it rarely enters my mind, SwiftKey is probably the app I use most given it’s my default keyboard of choice.

Twitter, Facebook, Gmail, Firefox, SMS, Words With Friends – everything I use on my phone is made easier with SwiftKey. And this is one of the few Android-only apps that I’ll name-check today given that, well, Apple doesn’t allow third-party keyboard apps to be installed.

While I have dabbled with Swype in my quest to escape the stock Samsung keyboard, SwiftKey is just so fast and easy to use, it always seems to know what I want to say even in my fat-fingered moments. I just can’t imagine using another keyboard app.

Dropbox is Dropbox – dependable, well-integrated and very indispensable. I dabble a bit with the likes of Google Drive and Bitcasa, the latter of which does appeal as more of a hard-drive in the sky, but I always keep coming back to Dropbox.

Evernote is a lifesaver – I use it for just about everything. Whenever I can’t get access to WordPress, I use Evernote to work ‘locally’, and sync to the cloud as soon as Web access is restored and copy the content over. Impromptu notes, (offline) maps, PDFs, booking reference numbers – everything has found itself in my Evernote account at some point. 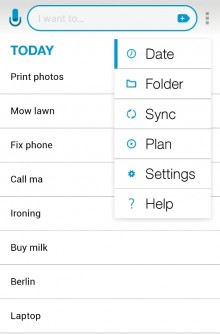 The only app I use that pretty much replaced Evernote for anything is AnyDo, which I now use for my to-do lists. It’s so easy to use, with a homescreen widget, and alerts to ensure I don’t forget to call my mum or buy the milk.

I use the stock Android Voice Recorder app for work and it serves its purpose well. If you’re an iPhone user, I would recommend Recordium – it’s apparently landing on Android soon and that will likely become my default recoding app of choice. SoundCloud is also a great app which I sometimes use instead.

There are a tonne of cool calendar apps out there –  I’m very much looking forward to Any.DO’s smart Cal app which should be launching shortly, starting with iOS and followed by Android. But I’ve gotten by fine thus far with the stock Android Calendar app which integrates well with my Google Account and I use this pretty much every day.

I debated whether to include Songkick, given that I don’t actually access the app every day, or every week for that matter. But I know it’s constantly working in the background, ready to tell me when one of my favorite musicians is playing nearby. So I had to include it.

Most weeks I get a pop-up alert from Songkick informing me that some random band that I’d almost forgotten about is playing at a small London venue nearby – there’s just no way I would discover these without Songkick.

This needs little introduction. With downloadable offline playlists, on-demand songs and albums and radio mode, I crank Spotify up most days, be it on my mobile or desktop.

Though there is an international version of iPlayer, the incarnation I use is UK-only – live and catch-up TV from across the BBC’s myriad of channels. I included this because, well, I use it a lot – particularly the recently introduced iPlayer Radio app. And I know there will be equivalents in your country too, such as the CBS streaming app in the US. 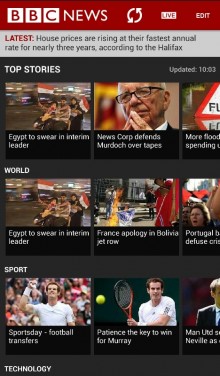 I use BBC News a lot because it’s easy to set up by category (Top News, Technology, Sport and so on), I love the grid-style layout and – importantly – it has offline mode.

So, before embarking on a 45-minute underground train journey, I just hit ‘refresh’ to get the latest stories and I can read them all en-route to my destination sans Internet.

As with BBC News, I use BBC Sport most days for live scores and highlights of football and tennis. Though unlike News, this doesn’t have an offline mode, which isn’t ideal.

Whenever I start reading a story on the mobile Web but don’t have time to finish it, I just share it directly to my Pocket account for a rainy day.

If I’m on a particularly long underground journey, and I’ve read everything in BBC News, I’ll load up Pocket to read a slew of random features from anything up to six months ago.

The rest: Fitness, money and travel 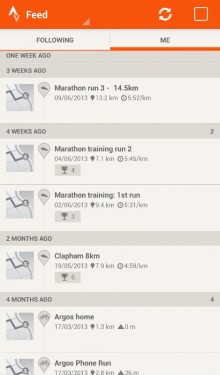 I run and cycle reasonably often, but I can’t quite settle on a single fitness-tracking app – I shift between Strava, RunKeeper and Runtastic with alarming regularity.

For now, I’ve started using Strava most often, which tracks my running/cycling routes via Google Maps, and stores it for posterity, but Runtastic also lets you control your music player directly from within the app which is a nice bonus.

I didn’t want to single a particular app out, so I thought I’d name-check all three.

The Co-operative’s mobile banking app (UK-only) is actually embarrassingly bad, but it does let me see my balance and last six transactions in my bank account, which is something. I often toy with the notion of changing banks to get a better mobile experience, but haven’t yet bothered myself.

Again, this is UK-only, but you will no doubt have a local equivalent. I use The Trainline most days to get times of trains in and around London.

Not the most exciting of apps but, well, it’s not meant to be – it’s functional, does the job well and is ultimately indispensable.

These aren’t my core apps, they get a special high-five.

I feel like I should mention Skype – I actually don’t use it that often on my mobile, the connection never seems to be that great and I always tend to go out my way to use it from my desktop instead. But Skype is Skype, it can come in very handy when I’m on the move, and is available across all the common platforms.

Tunnel Bear’s VPN app is also a great little nugget for accessing UK-siloed content when abroad, such as iPlayer, though it also works for the US, Canada and Germany.

And the same goes for Airbnb – I use it a lot around holidays and it has proved to be a lifesaver when trying to arrange last-minute accommodation when I’m on the move.

So, these are just a selection of my favorite apps – you no doubt have your own core lynchpin tools of choice. Let us know in the comments below what you really couldn’t do without.