Sometimes it’s the simplest of apps that really grab our attention. 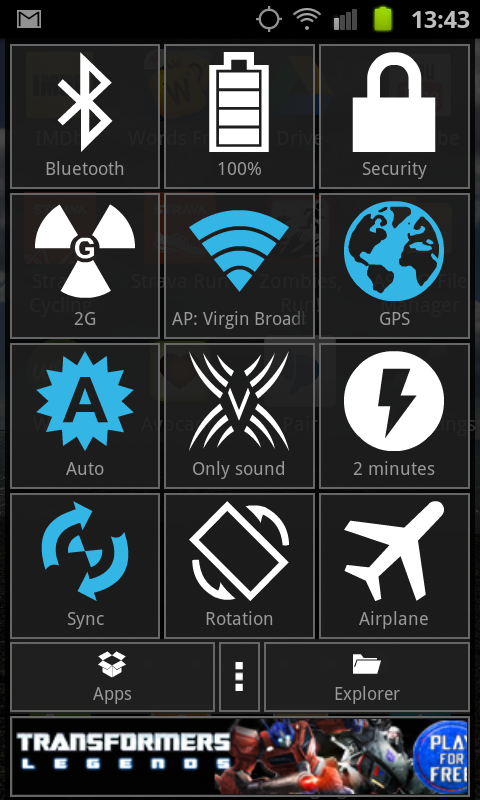 Hive Settings for Android is one such app, designed to make it as easy as possible to tap and tweak the settings on your device.

Granted, most Android handsets already enable this, either through the drop-down notifications menu, or through a couple of taps of the ‘Settings’ button, but Hive Settings brings everything together under one screen to make things just that little bit quicker.

The idea is, you’ll have this app on your homescreen. You tap it, and you have instant access to toggle the settings on Bluetooth, WiFi, GPS, Screen Off, Airplane Mode, Auto Rotation and more.

As noted already, some of these options are already featured prominently in the notifications bar, but Hive Settings goes a step further with these additional settings option.

The look-and-feel is actually similar to that of MySettings, an alternative settings Android app, but Hive takes it further still. Plus, it’s also worth noting here that MySettings sends horrible push-ads to your device on the free version.

Hive gives you easy access to all your installed apps, to open, uninstall and even export an APK to your SD card.

Speaking of which, Hive Settings also gives you direct access to your SD Card (similar to Astro File Manager), which is an incredibly handy inclusion.

The app was the handiwork of _Lucia over on XDA-Developers, and was seemingly built much for their own needs as it was the wider Android-using public.

Hive Settings is available to download from Google Play now. Meanwhile, check out the official demo video below.