The much-anticipated Nokia World came and went and, well, we’re left with a lot to chew over in the wake of the Finnish mobile giant’s announcements. So by way of a quick recap, here’s everything that was revealed at the Abu Dhabi event.

Hold on to your hat…

This was the juicy news everyone was waiting for. Nokia unveiled the 10.1″ Lumia 2520, a $499 Windows RT 8.1 tablet with LTE. It’s expected to start shipping this coming fall, with the initial roll out kicking off in the US, the UK, and Finland, with additional countries to follow “shortly after.”

Join now
Much like the Microsoft Surface, the Lumia 2520 pairs with a $150 Nokia Power Keyboard, a wraparound cover that includes a fully functional keypad. Unlike the Surface, however, the attachment features a gesture trackpad and also provides five hours of extra battery life and two built-in USB ports. Nokia claims its tablet provides fast-charging capability: up to an 80 percent charge in one hour.

It comes with 4G LTE and Wi-Fi. Since it’s running Windows RT, it also ships with Microsoft Office and Outlook preinstalled, which Nokia says makes it “an ideal mix of fun and productivity.”

Is it any good? Well, check out our hands-on for our first impressions.

Both ship with Windows Phone 8 and feature a 6-inch screen, though the former has a 1080p display and the latter has a 720 display.

Despite this, both devices will be able to include a new third column of tiles on the home screen. This shows the close ties between Microsoft and Nokia: the latter is well-aware of the former’s decision to have the extra Windows Phone tiles depend on screen size rather than resolution.

Are they any good? Check out our hands-on with the Nokia 1320 for our first impressions, and the same for the Nokia 1520.

Nokia announced it was expanding its Asha range of devices with the Asha 500, Asha 502, and Asha 503. All three will be available in bright red, bright green, yellow, cyan, white, and black, shipping in Q4 2013.

The Nokia Asha 500 features a 2.8-inch screen, 2MP camera, and comes in single SIM and Easy Swap Dual SIM variants. It will ship for $69 in Africa, Asia-Pacific, Europe, Latin America, and the Middle East.

The Nokia Asha 502 features a 3-inch screen, a 5MP camera with LED flash, and Easy Swap Dual-SIM. It will ship for $89 in Africa, Asia-Pacific, Europe, and the Middle East.

You can read our hands-on with the new Ashas here.

Related to this, Nokia also announced that its global DVLUP rewards program will be taking Asha developers in addition to Windows Phone developers. To further bolster development for Lumia and Asha, Nokia will now offer over $5 million in rewards through the gamification program. 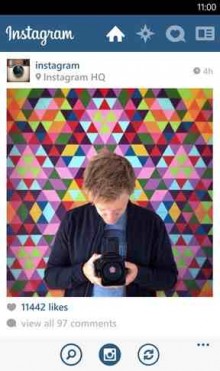 Instagram CEO and co-founder Kevin Systrom revealed the app most Windows Phone users have been eagerly awaiting is finally coming. When? An exact date wasn’t given; all we know is Instagram will arrive in the “coming weeks”, so it’s safe to say it will be here long before the year is out.

Moreover, it may be Nokia World, but WhatsApp CEO Jan Koum used the event in Abu Dhabi to announce that his mobile messaging startup has now hit 350 million monthly active users — that’s up 50 million in just two months.

Koum, who is known for being somewhat elusive with press, made the reveal while talking about WhatsApp’s ongoing partnership with Nokia — which now includes photo sharing directly from the camera of the three new Asha devices that Nokia unveiled today.

If nothing else, this should go some way towards determining whether Windows Phone’s big problem is or isn’t a lack of apps.

Nokia also introduced a new portable wireless charging plate called the Nokia DC-50. The device will retail for $99 when it arrives globally in the final quarter of 2013.

Supporting the Qi wireless standard, it is compatible with Nokia Lumia devices that support, well, wireless charging, including the Lumia 1520, Lumia 1020, Lumia 925, and Lumia 920.