Whether you’re shopping for a fitness-tracker or in the early stages of training for a marathon, the issue of how much energy you burn in your day-to-day activities will likely rear its head at some point.

As a general rule, the more active you are, the more food and liquid you should consume. And for those considering partaking in particularly long endurance events such as marathons, a strategic approach is required to ensure they fuel up at the optimum times to see them through the race.

With that in mind, a new app launches for iPhone this week, designed to remind you to re-energize during long runs. We took a quick peek at Fuel My Run.

First up, Fuel My Run has three modes for a new run – one is ‘Quick Run’ which actually bypasses all fueling reminders and simply tracks your distance, time and pace. But there are better apps out there for that, so you’d likely wish to use this for the ‘Sample Fuel Plan’ and ‘Custom Fuel Plan’ modes given this is how the app is striving to differentiate itself.

Now, Sample Fuel Plan has two sub-modes – one for half marathon and one for marathon training. These are designed to take any thinking out of the equation and simply get you started. You’re served with voice reminders at pre-determined intervals based on the race you’re training for. You must select both an energy gel/bar AND a sports drink from the drop-down menus to indicate the amount of carbs you’ll be consuming. For a half marathon, this will be approximately 30 grams per hour, and double that for a marathon.

A Custom Fuel Plan lets you set voice reminders to fuel-up at specific times OR distances throughout your run. You can also choose your fuel types and see how many carbs you consume during your run. Each plan can be saved, edited and reused for a future run. 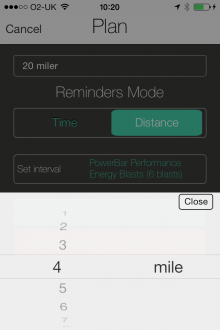 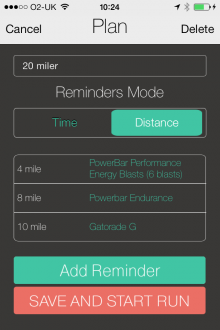 As noted already, there are better GPS tracking apps out there – this is probably why you have the option to sync your data with RunKeeper.

The app also has a ‘Play Music’ option built-in, which plays stock electronic music. You should also give the app your vital stats – height, weight and age.

All in all, it’s a decent app that does what it proclaims to do. However, for those who prefer a more functional GPS tracking app, with maps, splits and more, the added bonus of fuel reminders will likely do little to sway you here – it’s really not that difficult to remember (or set reminders) to gobble down an energy bar or take a swig of Lucozade every half-an-hour. This feels more like a feature that should be integrated into existing apps such as RunKeeper, Runtastic or Strava. But if you really are prone to forgetting to fuel-up, well, it’s certainly worth checking out.

“More often than not, it’s lack of adequate fueling that causes a runner to hit the wall,” explains developer Mark Kennedy. “All the training in the world will not help a runner in those last few kilometers of a race unless they have taken their fueling seriously.”

Fuel My Run is available to download now from the App Store, costing $1.99 or your local currency equivalent.