So you’re bored with your 5k runs or four lengths of the local swimming pool, and you’re looking to get torn in to some serious fitness activity? Read on.

Whether you’re gearing up for a marathon, triathlon or something a little more severe, here’s a handful of technology-focused tips that might just help you.

The first port-of-call will likely start with your smartphone – if you’re reading this, you probably already have one, and thus any subsequent investment on your part will be minimal.

We’ve already run through (if you’ll pardon the pun) some of the popular GPS fitness-tracking apps out there, and each of these will likely suffice for your needs over shorter distances, and perhaps even up to marathon-distance. But this will, of course, depend on your fitness and how long you plan to take – while someone may run a marathon in less than 3 hours, if you’re a novice you could take 5 hours or more. And obviously over longer distances, be it ultra-running or cycling sportives, you could easily be out in the wilderness for half-a-day, if not longer.

One way to ensure you get the most bang for your battery-buck is to ensure only the bare-minimum is running on your device – so if you really, really must listen to music, get yourself a separate portable music player such as an iPod Shuffle.

On the device itself, you should close any apps that could be running in the background that may be draining your juice. A simple trick here is to turn your phone off and on again – this will essentially sift out any rogue app that’s been running without your knowledge.

Most important of all, however, is switch off your mobile data – particularly if you’re on 4G – as this will save you substantial power. Contrary to what you might think, GPS-tracking apps such as Runtastic or RunKeeper don’t actually need an Internet connection – this is only required afterwards if you wish to upload or share. As long as GPS is enabled, tracking should still work.

On Android, depending on your handset and version of the OS, you can simply swipe down from the top and click to turn off mobile data.

Given that you may be traveling abroad for your endurance event, this means you can still continue tracking your runs and cycles, and then wait until you have a WiFi connection in your hotel, or connect to data-roaming for just a minute, to upload your vital statistics.

Elsewhere, dim the brightness on your screen and turn off WiFi/Bluetooth too – it should save you a little bit of drainage.

We’ve covered preserving juice, but what about something that goes beyond that and actually gives you juice? We’re not talking about liquid refreshments here (though we do recommend drinking lots of fluids), but we are talking about portable battery packs.

A personal favorite of mine is the PowerGen Mobile Juice Pack, it comes with a built-in micro-USB cable for compatible devices, though you can charge any device with it through the baked-in USB port. You should get at least one full charge from it.

If carrying an extra device doesn’t appeal, then you could spend a bit more money on something like the Mophie Juice Pack for Samsung Galaxy S4, which costs $100. It’s a case and charger in one, so when your device runs out, you simply flick a switch on the case and your pocket rocket starts to replenish. Mophie offers similar cases for iPhone too, and if you shop around online you’ll find a tonne of alternatives.

If you’re used to running or cycling short distances, it’s likely you won’t put too much thought into where you go – if you’re only going to be out and about for 30 minutes, chances are you won’t get too bored pounding the same routes in the local park.

But with longer distances, you will want to mix it up if you’re training for a big event, to preserve your sanity. In an ideal world you’d simply do a loop from your home, but if you live in an urban area this might not be ideal, so you will likely have to really start planning your routes, which may require jumping on a bus or train to start from another location.

The likes of Runtastic let you search for and ‘Flag’ routes through its Web-based portal, which can be done by distance and ‘type’ (e.g. cycling, running, walking).

These are typically routes that have been pre-mapped by other users, and essentially save you having to do a lot of the donkey work.

With each route you flag, this will pop up directly in the mobile version of Runtastic, and it will show you where to run, broken down into stages.

Other services such as MapMyFitness – the umbrella brand for apps such as MapMyRun and MapMyRide – include searchable routes directly in the mobile app, to save you having to sync up via the Web.

On shorter runs, you may be happy rattling around with a mobile phone and a set of keys in your pocket. Over 20 or more miles, this will not only annoy you, but it could actually hamper your progress.

The likes of Amazon have a tonne of cases to enable you to strap your phone to your arm, for iPhone and popular Android devices. These shouldn’t set you back much more than $10-$20.

And although this is moving slightly away from the type of technology we typically cover, we can’t over-emphasize the importance of getting a spare key cut for your house and carrying it in a wrist wallet such as this, which will also let you squeeze in some cash, a travel card and anything else you may need to see you safely back from your 60-miler.

Why strap a chunky phone to your arm when you could actually just get a dedicated GPS-enabled watch instead? There is a tonne of options on the market, and honing in on the right one can be daunting – which is where we come in.

Costing $100, the Soleus FIT 1.0 is a decent and affordable entry-level GPS timepiece that gives you speed, pace, distance and calories.

Alternatively, if you’re already Niked-up to the max with Fuel Bands and running apps, you may as well go all-in with the TomTom-powered Nike+ SportWatch GPS, which costs around $170 and delivers the same metrics as the Soleus, and a few added extras – including the ability to sync up with your existing Nike fitness profile.

Garmin is a well-established brand in the GPS watch space too, and the Forerunner 610 (touchscreen) is a good piece of kit, though it will set you back around $400.

More and more technology is being built with water-junkies in mind. So whether you’re into water-skiing or triathlons, you can keep apace with your land-pounding counterparts.

This year, we’ve started to see the first high-profile waterproof smartphones emerge from manufacturers, with the mighty Samsung unveiling its S4 ‘Active’ variant (check our hands-on), followed by the Sony Xperia Z. There’s also the Casio G’zOne Commando and Kyocera Torque. It’s worth noting here that these are geared towards snorkeling or swimming, as opposed to deep-sea diving.

And if you want waterproof music, some companies cater specifically for this, such as the iPod shuffle from a company called Underwater Audio.

As with running, carrying a heavy smartphone strapped to your arm in a pool can be annoying when all you want is some tunes to alleviate the boredom. With a mini waterproof music player, you can just clip it to the back of your goggles and you don’t even notice.

The model offered by Underwater Audio promises to work in up to 200ft of water – so this could potentially work well for scuba divers. However, it will also require waterproof earbuds which come with the following recommendation: “to avoid the risk of serious injury, do not use below 3.05m (10ft)”. This is presumably to do with the risks involved when trying to equalize.

It will cost you north of $100 more than a standard Shuffle to buy the waterproofed version, but if you like to be serenaded by Sergeant Pepper while swimming, or even running in torrential rain, well, it’s a worthwhile investment.

Also, some companies specialize in waterproofing your existing technology, including Liquipel, which invites you to send your smartphones, tablets and headphones in to be treated with its magic ointment, so you can front-crawl your way to fitness while listening to your favorite beats. 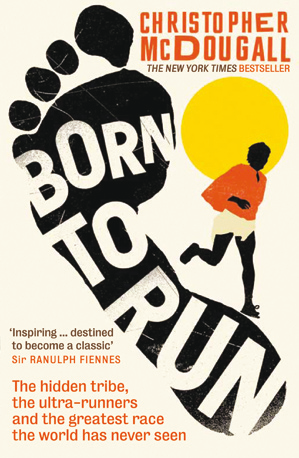 If you’re looking for a little inspiration in between sessions, you could do a lot worse than fire up Christopher McDougall’s Born to Run on your Kindle (what do you mean, “that’s a tenuous technology connection?”).

This true story follows the Tarahumara Indians, who have mastered the art of running hundreds of miles at a time in flimsy ‘shoes’ made from tires, without rest and without injury.

The author also guides the reader through tantalizing tales of feats managed by ultra-runners, and by the end you will probably think that a marathon sounds EASY.

So not only is it a great read, but psychologically it puts you in the right zone to be tackling epic outdoors adventures.