Four months since it first launched to an invite-only crowd, contact management service Addappt is back at it again. This time, it’s opening up the doors to everyone to try the service and also releasing new updates for its iOS app.

Those that use the app will now find that it supports group features, such as management and messaging. Additionally, it includes the ability to pass along photos to contacts right through the app.

When we last met Addappt 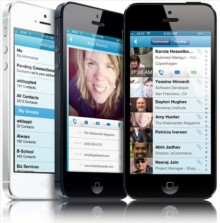 Addappt is a service with Bump-like features. It replaces your existing address book with something that looks more modern and high-tech. It’s goal is to make your phone contacts accurate by having others keep their information up-to-date right through a single application.

Quick recap of how it works: when you meet someone and share your contact information with them, you add that person’s email address into your phone and the recipient will receive an invitation to port their contact info over based on what’s stored in the app. If you have a new phone number, you need only make the update on your side and anyone who has you as a contact in Addappt will automatically receive the update.

The service launched in December using an invite-only sign-up model, but now it is available to everyone.

However, it believes that privacy is important when it comes to contact management services like itself. In order to prevent users from signing up with someone else’s email address, thereby impersonating that person and connecting with their contacts, Addappt asks users to verify their email. 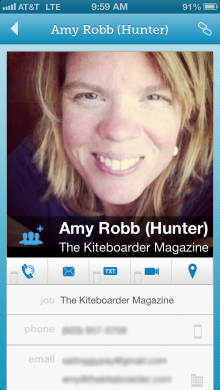 There are several components that make up this update. The first is group management — within the default iPhone Contacts app, users were not able to create groups.

In Addappt, by simply tapping on the pencil icon in the right of ‘My Groups’ on the home screen, creating a group is relatively simple and seamless. Once a group has been created, the company says that users can add individual contacts by tapping on the ‘group +’ icon located to the left of the name on the photo and designate which group it belongs in.

Another part of this update also involves groups: Group Messaging. Addappt says that users can communicate with a group of contacts just by a single tap in the app. This feature sounds similar to the feature one gets with GroupMe, TextPlus or any other messaging service. Notably, the company says that this group messaging feature is not limited to just the app or the iPhone — users can also email, text, or share photos with anyone on open platforms like email and phone.

Lastly, users are now able to share multiple photos with their contacts right through the app. According to founder Mrinal Desai, in the iOS photo gallery, it allows up to five photos to be shared by email. If a user individually attaches them, there is no limitation, but takes a lot of time to attach several photos one by one, in addition to adding multiple contacts to send the photos to. He says that Addappt will attached 10 photos with up to 14 taps needed and if there’s an album of 10 photos, it’s reduced further to five taps.

Available in the Apple App store

The Addappt update is available today in the Apple App store. No word on the Android version, but when we last spoke with Desai, he mentioned that he was contemplating creating a version. However, seeing that the app is just now opening up to the public, it might be a while.