The Internet revolution may be in full swing, but a third of TV-owning American households still have at least four television sets, Nielsen reports.

Compare it with the “mere” 116 million Americans who access the mobile web, and you may come to the conclusion that TV still has a future as a device.

Here’s a visual summary of some of Nielsen’s key findings, which are part of its annual

Despite TV’s stronghold as a device, the way we interact with television has obviously changed a lot over the last years. The rise of timeshifted content is the proof of it; according to Nielsen, 111m have watched timeshifted TV, a 11% increase compared to 2010’s Q2. 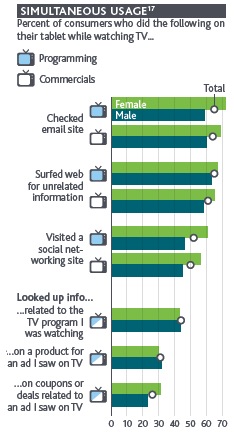 Nielsen’s study also confirms the rise of two-screen usage, as viewers use their tablets to do all sorts of searches while watching TV, such as looking up info on the program they’re watching or an ad they saw – a trend on which apps like Miso, GetGlue and Umami are already surfing.

It’s also interesting to note that almost 5 million Americans are broadband subscribers without paid TV access, although it remains unclear how many of them are recent ‘cordcutters’.

However, online and timeshifted video only represent a small portion of the Americans’ media weekly time, which is still dominated by traditional TV, especially among the elderly.

As Nielsen reported a few days ago, it’s on Netflix that viewers spend the most time when it comes to online video (10 hours and 43 minutes), although YouTube has the most unique viewers by far (126.5m).

It’s also worth noting that Netflix and Hulu users are using these services very differently depending on which device they use to access them. As Nielsen points out, “just 1.2 million people used a standalone device, such as an Apple TV or Boxee, but these devices account for nearly 1/5 of their TV screen time.”

A look at the mobile landscape

Besides TV, Nielsen also released interesting data points on mobile phones. Marketers, for instance, may be interested to know that minorities are more likely to own a smartphone than white Americans. Among Asians, 60% have a smartphone, vs. 39% among white Americans.

While feature phones still represent 57% of the market, Android devices are the most common type of smartphones – except among Asians, who prefer iPhones.

For those who own a smartphone, data-rich activities have become increasingly common. As a result, mobile data usage has grown considerably year-on-year, especially among the youngest, Nielsen reminds.

Beyond the US: “the globally connected consumer”

While most of Nielsen’s findings focus on the US, the study also includes interesting data gathered in 56 countries, reminding us that connected devices are a global trend. For instance, 35% of the respondents already own an HDTV, with 23% intending to buy one.

As you can see when looking at purchase intentions in Latin America, Africa, the Middle East and Asia, connected devices are likely to keep on growing at an accelerated pace over the next months, fueling the evolution of TV.