If you have the impression that 2011 was particularly rich in news, it’s not just you. According to CNN’s MD Tony Maddox, this was “the most demanding year we can remember.”

This busy year was not only about news itself, but also media apps, which have undergone significant transformations over the last months.

According to its homepage, Bambuser lets you “share live moments from your phone or webcam” – but forget about the holiday pictures Bambuster uses to advertise itself. As we reported, Bambuser has actually become a tool for citizen journalism, and Egyptian activists have been using the service to broadcast Tahrir Square protests in real time from their mobile phones.

This goes well beyond Egypt; Bambuser now has about 1 million users worldwide, from 190 countries. Its founders are also well aware of its potential when it comes to real-time news, something they envisioned from the very beginning. Still, giving a voice to protesters doesn’t come without trouble, and the service has suffered temporary shutdowns in the Middle East.

Yet, Bambuser has also become a reliable source for traditional media outlets, as its co-founder Jonas Vig told our Middle East Editor Nancy Messieh last month in reference to Egypt:

“On the 25th of January, when Twitter was flooded with all the tweets. One of the partners we have with public broadcasters in Sweden, they couldn’t validate the news. So they turned to Bambuser, and since this is real-time, could validate that there were thousands of people in the Square. They used a Bambuser video in their traditional broadcasting as well.”

It’s a future Bambuser fully embraces; “What we want to do is to work with as many media outlets as possible,” Vig added.

Shelby.tv may only be a few months old, but we’ve already written about it quite a few times; no later than today, we listed it as one of the companies that are building the future of social video.

So what does Shelby.tv do? A TechStars startup, it gathers all the videos your friends are posting on social networks, and lets you watch them very easily. Beyond simplicity, its best asset could well be its design – here’s what the iOS app looks like if you haven’t tested it yet: 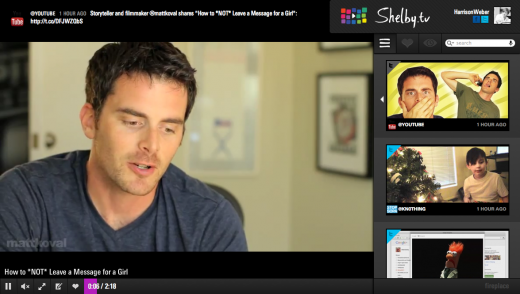 ➤  Shelby.tv, via the App Store

2011 was a very interesting year for Miso – not only because it kept on acquiring new users, but also because it does much more than it used to. From an entertainment check-in service à la GetGlue, the service has gradually become a social TV platform, integrating second screen apps (‘Sideshows’) within its own app, which is now available on iOS and Android (see our interview with Miso’s CEO).

What it means is that using Miso isn’t just about telling the world which series you’re currently watching anymore. You can also read trivia about a TV show and its cast, find out which music track is playing and share your favorite comedy quotes with your Twitter and Facebook friends.

Miso’s decision to expand beyond TV check-in doesn’t mean it isn’t a very promising segment. GetGlue knows it very well: according to its blog, it is now “a community of over 2,000,000 entertainment fans, that checked-in more than 100,000,000 times in 2011.” 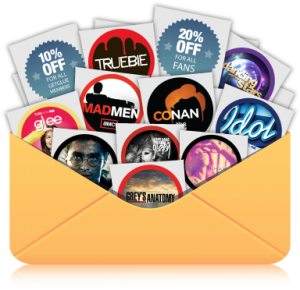 Unlike foursquare, GetGlue only focuses on media check-ins, around movies, TV and music. However, both sites share gamification mechanisms through badges and discounts – GetGlue has closed partnerships with major film & TV brands such as True Blood and Twilight.

However, it would be wrong to see foursquare and GetGlue as direct competitors, and GetGlue added foursquare integration in March this year. In other words, GetGlue found a niche and is filling it very well.

Even if you’re not a frequent reader of the Financial Times, you should care about its app if you are the slightest interested in the future of media. As we reported in July, the newspaper decided to dodge Apple’s 30% cut on in-app subscription plans by offering a paid-for web app.

It seems it wasn’t such a bad idea: according to the newspaper, its browser-based HTML5 app has registered over one million users since its launch.

Does it mean grass is greener outside of Apple’s walled garden? Not having to hand over 30% of their revenues is certainly appealing for publishers and newspapers, but there’s more than that, as many also worry about the limited access they’d get to subscribers’ data if the whole process is managed by Apple within its own environment.

In this context, newspaper web apps are highly likely to mushroom over the next months. Will smaller publications be as successful when deciding to follow the FT’s lead? Only time will tell, but this showdown between Apple and the press will definitely be one of 2012’s top stories to watch.

If you don’t live in the UK, you may not have heard of Zeebox – but it doesn’t mean you shouldn’t start paying attention to it. As we reported, it was launched as an iOS app by a team which includes Anthony Rose, the former head of iPlayer at the BBC, well known for his vision on the future of television.

In other words, Zeebox plans to be much more than a local second screen app, and ambitions to expand way beyond what it currently is. At the moment, the app itself feels like a work in progress (see our review), albeit a promising one, and we wouldn’t be surprised to see new features added to improve user experience in the near future. 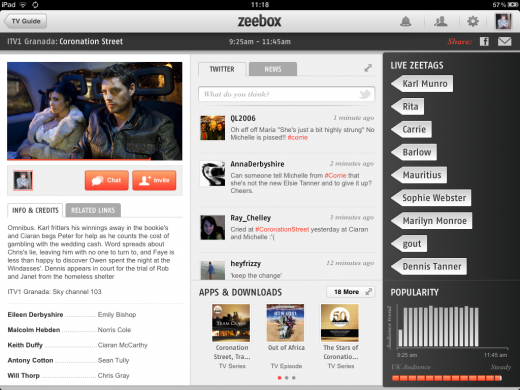 The app is also set to become available across Europe and the US in the future; if Zeebox’s co-founders are to be believed, you’ll probably hear a lot more about Zeebox in 2012.

➤  Zeebox, via the App Store

If one app has changed the way tablet owners consume their news, it’s Flipboard. Although it took time, iPhone owners have also joined the club, and it was worth the wait: Flipboard’s iPhone app makes the most of the smartphone’s small screen. 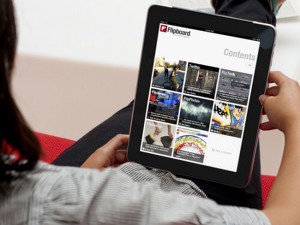 Not only has Flipboard dramatically grown over the last month (see our post), its model is also evolving, and could be much bigger than many thought. While Flipboard initially focused on giving its users a way to browse multiple sources through its app, it’s increasingly moving towards high levels of aggregation – up to the point where it could soon become a magazine of its own.

➤  Flipboard, via the App Store 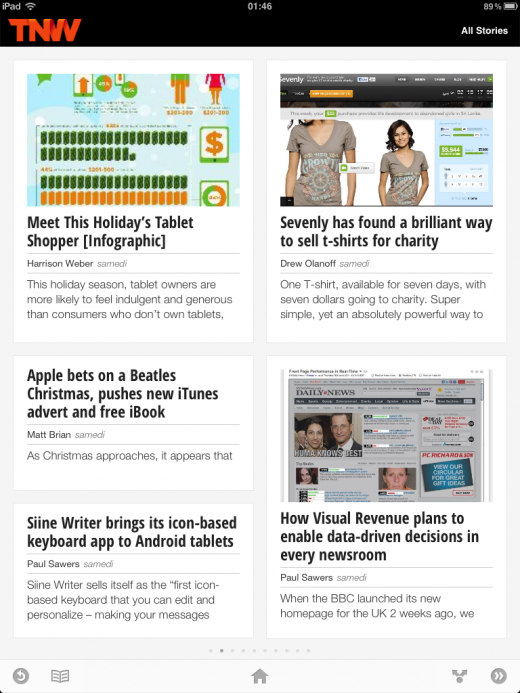 Google Currents is Google’s latest mobile newsreading app (see our previous post). Thanks to partnerships, users get access to full-length content from over 150 leading media outlets. But that’s not all: independent content owners can also use the platform to make their own content available.

While it is only available in the US at the moment, it could gain more space in mainstream media once Google decides to give the app a global boost. From our perspective, it has what it takes to become a hit, and its interface is very sleek, at least on a tablet. It is now mostly down to Google to get marketing right and bring it all to fruition

➤ Google Currents, via the App Store and the Android Market

Though many of us still think of YouTube as a website, it is also a very successful app. This is true on mobile devices, but also on connected TVs – earlier this year, Samsung announced that YouTube was one of the 5 most popular apps in its TV Apps Store.

This market isn’t as small as you may think; over 5 million apps have been downloaded through Samsung TV Apps platform in just a year. As a result, YouTube has changed and adapted itself to this growing market opportunity.

This is true of features and interface, which are increasingly compatible with a “Leanback” experience – especially on Google TVs.

But this evolution is also influencing YouTube’s offer, as the platform closed a flurry of deals with movie studios, celebrities and other TV content producers to attract professional, premium content to the platform. From “Movies” to “Channels”, YouTube may well be your next TV.

Like it or not, Facebook also deserves to be on this list – and not just because it finally released a pretty good iPad app, putting an end to a long wait.  The reason why we listed it? Its transformation into a media platform (see our round-up post about F8).

As you may have noticed if you’re one of the million people who use Facebook on a daily basis, it is now much more than a social network. Instead, it also lets you listen to music and share it with your friends, and the same goes for movies. 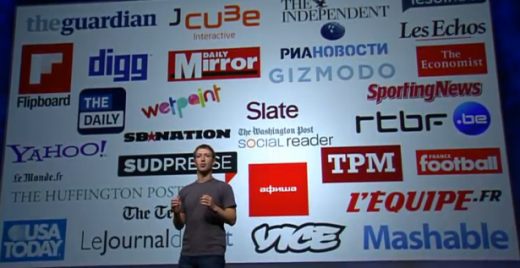 But what interests us the most is Facebook’s impact on news; people are increasingly getting their news by looking at what their friends have been sharing on social networks. These ‘friends’ can include media outlets, and those which decided to jump onboard are already seeing impressive results; as we reported, The Guardian’s Facebook app has been installed by over 4 million people in two months. In other words, it seems that audacity pays off.

From partnering with Facebook to saying no to Apple’s rules, risk-taking strategies have brought rewards to prestigious sources such as the FT and The Guardian, and could inspire other media outlets to follow the trend.

No matter what they decide, there is one thing they need to be aware of: the future of media will be social.