Whilst Apple TV owners have their own frustrations with the lack of certain features on their Apple TV set-top boxes, perhaps the biggest frustration was that Apple hadn’t upgraded its latest release to run a number of iOS applications.

Showing the true spirit of the iOS development community, this particular feature has been delivered, in part, after developers Steven Troughton-Smith and another developer going by the name TheMudkip, rewrote parts of the Apple TV software to enable the installation and execution of certain iOS applications on the platform.

9to5mac posted a video of the proof-of-concept, which has a little while to go until it is ready for public release, demonstrating both the iOS calculator and Safari apps running — in unique side-by-side windows:

According to the developers, the software that is behing the application launcher, the iOS Springboard, had to be completely rewritten. TheMudkip’s MobileX window manager for iOS and Chpwn’s MobileLaunchpad launcher were then loaded, allowing multiple iOS apps to be run natively on the Apple TV, without AirPlay.

As it stands, there will not be a public release of the Apple TV hack, but we imagine it is in development. With specific milestones already achieved, the developers will be working to outfit the Apple TV with more functionality, greater control and support for more iOS applications. 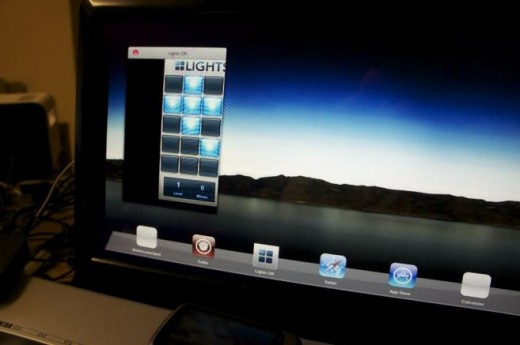