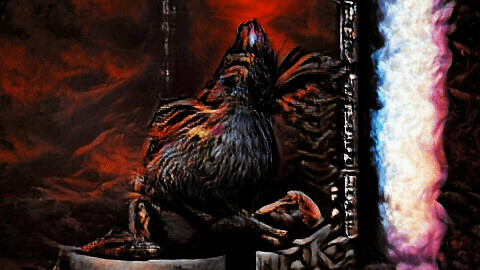 I love making up band names. If you don’t believe it, I once spent an entire evening creating new musical group names for folks on Twitter.

Coming up with funny or catchy monikers is hard. But… what if an AI did all the heavy lifting?

Dream no longer. This Twitter bot not only comes up with new metal band names, but also makes their album names and artwork too.

The algorithm behind this not super complex by today’s standards. The bot uses Open AI’s GPT-2-simple to generate band and album names. For generating album art, it uses the big-sleep library that converts texts into images.

As the headline suggests, Evil Chicken is definitely my favorite non-existent metal band, but I’m also including some of my other top picks.

Blood Red Castle (prep your drummer the hell out of some death/grind metal for the tri-part funeral following the death of your last metal hero's drummer with many types of harmonies and what not with reggae influences absofuckingluted.mp3 pic.twitter.com/8kGis35evF

While this bot uses the big-sleep library to create the album art, I would also like to see OpenAI’s DALL-E image generator to drum up some mean metal images.

Name generation by an AI is common now. However, it’s mostly used by researchers to come up with funny projects.

I’d like to see these experiments hit the real world. While I don’t think musicians would want their band to be named by AI, how about an album? Or a song? Or even just some lyrics.

You can check out all metal band names and images generated by this bot here.