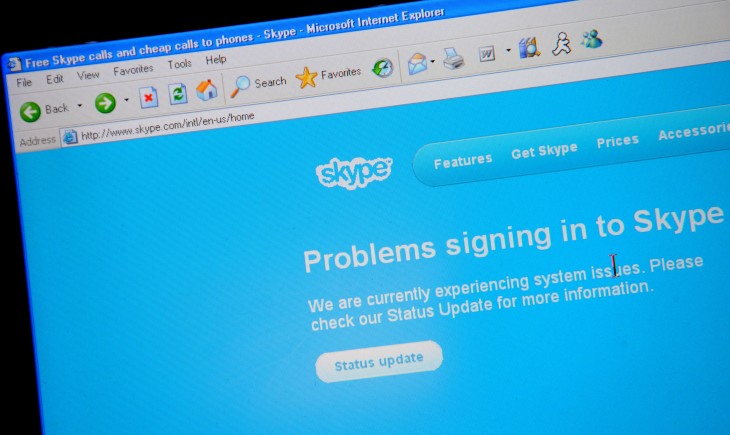 We’re not even through the first day of 2014 and cyber attacks have already made their appearance. Earlier today, a person (or a few people) breached Skype’s security and hacked its Twitter account, Facebook page, and blog. The group claiming responsibility is the Syrian Electronic Army (SEA). Its message: end spying on the public.

UPDATE: Minutes after we published this post, it appeared that Skype regained control and deleted the hacker messages from Twitter and Facebook, while its blog is being automatically redirected to Skype’s homepage now.

A Skype spokesperson responded to TNW with a statement: “We recently became aware of a targeted cyber attack that led to access to Skype’s social media properties, but these credentials were quickly reset. No user information was compromised.”

The Skype team has also taken to Twitter to acknowledge the hack and reassure users.

You may have noticed our social media properties were targeted today. No user info was compromised. We’re sorry for the inconvenience.

The SEA’s official Twitter account also repeated the messages that were posted on Skype’s social media profiles and blog.

Today’s events are most likely linked to the US National Security Agency’s surveillance programs uncovered by former contractor Edward Snowden. Many tech companies, including Skype’s parent company, Microsoft, have taken steps to refute claims that they have been cooperating with the government.

Documents from the NSA’s PRISM program apparently indicate that the secretive agency could spy on Skype audio and video calls thanks to backdoor access — which was contrary to Skype’s insistence that its service could not be wiretapped. Interestingly, in October, it was reported that the messaging and calling service was under investigation in Luxembourg over suspected links to the NSA. A month later, the country’s data protection authority cleared both Microsoft and Skype of any violations.

The group’s first Tweet appeared just within the hour:

Here’s what they posted on Skype’s blog:

The Syrian Electronic Army has certainly been busy in the past year. The group backs Syrian President Bashar al-Assad and has been targeting news publications, computers, and various other companies. In 2013, it claimed responsibility for the hack of the New York Times, the Financial Times, the BBC Weather’s Twitter account, and even went after Twitter.

Today’s message is a bit striking since it’s focused on spying, not the SEA’s usual pro-Syria communication that it leaves when going after websites and social media profiles.

We’ve reached out to Skype for comment and will update this if we hear back.