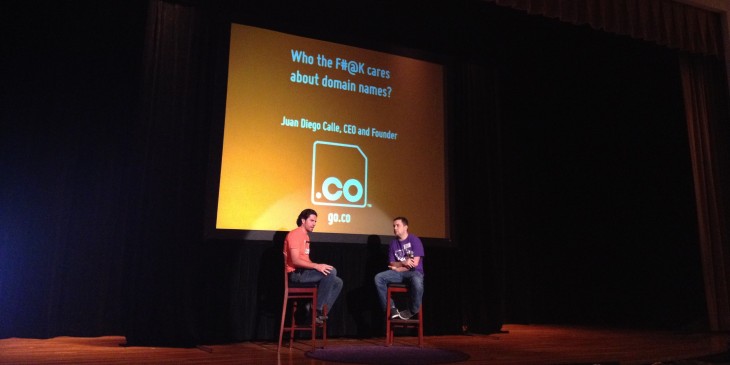 As we reported, SuperConf kickstarted its third edition last week with its Startup Blast Off competition, won by Vinylfy, a promising social platform for record collectors that received $22,000 in cash and rewards.

As a Miami-based conference, the event put the city’s success stories in the spotlight, and .CO is undoubtedly one of them. While this top-level domain (TLD) name belongs to Colombia, it is administered by .CO Internet S.A.S., which launched it to the public in July 2010, and turned it into the popular extension we all know.

Talking to Miami-based entrepreneur and SuperConf co-organizer Brian Breslin, .CO’s CEO Juan Diego Calle explained how it all happened. The process actually started as early as 1999, well before Calle’s got personally involved. At the time, the Colombian government was still wondering whether and how it could award its extension to a third party, but it wasn’t until 2006 that it passed a law to authorize such a partnership.

A bid ensued in 2009, in which .CO took part alongside Verisign and other companies, with the ambition to turn this extension into a global brand. As an Internet entrepreneur himself, Calle was aware of how difficult it had become to get a good domain name ending in .com, and had a ‘lightbulb moment’ when he realized that Colombia’s ccTLD could also mean “company,” creating new opportunities for international entrepreneurs and business owners.

While being a Colombian national was a plus to negotiate with the government, there weren’t any shortcuts, and the company had to submit a 1,165 page bid detailing its plans. One of the assets it highlighted was the robustness and complex technology it could provide thanks to its joint venture with Neustar. 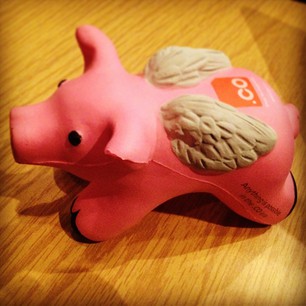 Not only did .CO win the bid, but it attracted 1.4 million domain name registrations, mostly from the US, Europe and Asia. In other words, it has created a brand that goes beyond Colombia, and is now associated with tech startups and innovation. Its mascot is a flying pig, because “anything is possible in the .CO era.”

According to Calle, .CO’s success was anything but obvious. When it first started, it had to overcome skepticism for its decision to be based in Miami and its connections to a Latin American country. As a result, it worked hard to establish its credibility.

Its first lucky break came when Twitter and AngelList jumped on board, respectively securing t.co and angel.co. Many others followed since then, such as Startup America, which nabbed the super-short domain s.co and closed a partnership with .CO to make sure that its participants would also have access to short domains (see our previous post).

Go Daddy has also been a very important partner for .CO since 2010, when it made the extension the default choice for new registrations. It has also played a crucial role in spreading the word about .CO with its Super Bowl ad campaigns, such as YourBigIdea.CO.

.CO has annual revenues of over $25 million, but Calle is convinced that it still has plenty of room for growth. “We want to get the next Facebook or Twitter to build their business on .co, and we know this will take time. It is not going to happen overnight,” he acknowledged.

He also noticed that the domain sector is changing fast. While American users have long been engrained with the idea that .com is the only domain that matters, the market is set to become increasingly fragmented, with the upcoming attribution of new top-level domains.

.CO reacted to this shift in two ways: it is working on raising its brand, but also decided to apply for 13 new gTLDs, such as .inc, .ltd, .llc, .app, .web, .book and .law. In several cases, it is bidding against giants such as Amazon and Google. “We know we won’t end up with all of [these gTLDs],” Calle said.

Regardless of the outcome, .CO’s best bet seems to keep on building on its existing brand, and make sure that users see it as a premium destination for innovative ventures.

We will add a link to the video of this talk when it becomes available. H/T to Ed Toro and Startropica for their live notes from the event.