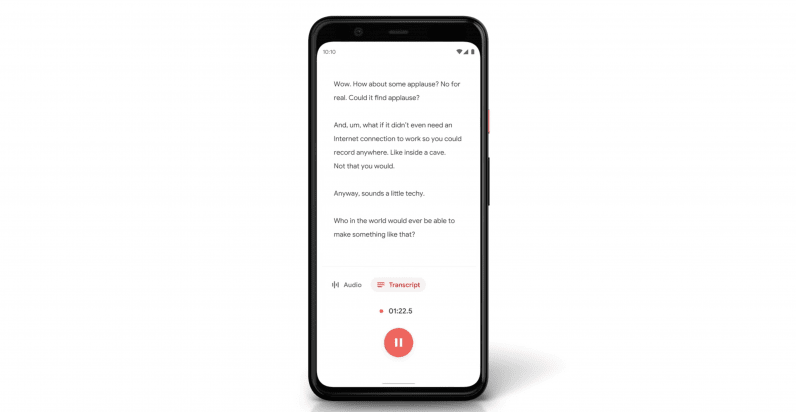 One of the Pixel 4‘s best features may also be its most unassuming. Not the fantastic camera or cool-but-inconsequential radar gestures, but rather the phone’s voice recorder app. Instead of just taking simple audio clips, the app is able to actually automatically transcribe speech, making it easy to copy the text for use elsewhere or to skip ahead to a specific moment.

As cool as the app is though, we always knew there was no big reason for it to be exclusive to the Pixel 4. Now Google is finally bringing it to other devices, starting with the Pixel 2 and 3 series (including the 3a).

Aside from transcribing clips, the app does a pretty decent job of recording high-quality audio. And equally useful, the app actually lets you search for specific parts of a clip. It can help you search for specific words, but it can also detect when other sounds, such as music or applause happen within a recording. It could be incredibly useful for those making extra-long recordings, such as for students capturing a lecture.

To download the app, simply head on over to its Play Store listing if you have a compatible device. No word on when it will arrive on non-pixel devices, but if you’re desperate, you can always sideload the APK. No guarantees on how well it will work on an unofficial device – some users have reported crashes – but it should run if your device is on Android 10.