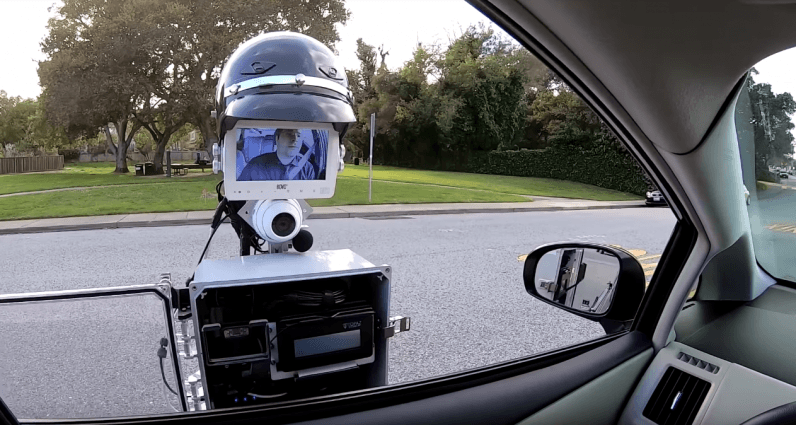 Remember RoboCop? In the late 1980s, in a dystopian future version of Detroit — that looks a lot like the current version of Detroit, if we’re being honest — an experimental cyborg cop, “RoboCop” aka Officer Alex Murphy, set out to clean the streets of some of its most vile criminals.

In this version of the future, officer Murphy is actually closer to a wheelchair stair lift and a tablet on a stick. Developed by SRI International, the crime fighting robot is less rough and tumble and more “attempting to reconnect, weak signal.”

Still the robot isn’t without utility. Each year, millions of drivers are pulled over for minor traffic infractions. These infractions happen to be highly risky for law enforcement personnel due to the threat of physical violence, emotional drivers, and those instances where a minor speeding ticket turns into something much more serious after a warrant search.

SRI International’s version of RoboCop is essentially a video camera mounted to an extension arm. When police make a traffic stop, rather than getting out of the car to confront the driver, the arm would extend from the police cruiser to the stopped vehicle.

The robot has a built-in screen and camera, allowing the driver and officer to talk to one another from a safe distance. It’s also equipped with a barcode reader that allows for quick scanning of a driver’s license and vehicle registration. If the human officer inside the car decides to issue a citation, the bot even has a printer to spit out citations.

If the pulled-over driver decides he’s not dealing with SkyNet today, the robot also has a spike strip that it discretely places under one of the vehicle’s tires as the arm extends.

For its part, SRI International says the bot isn’t meant to replace human officers. It’s still up to their discretion in determining which vehicles to pull over and which drivers to issue citations to. Instead, the decidedly less cool version of RoboCop exists solely to make both officer and driver feel safer in these often contentious confrontations.

And while it’s no Alex Murphy, this robo-cop still exists to serve and protect. Currently, SRI is just beginning to test the robot and there are no immediate plans to implement the technology.

Read next: 6 ways to improve your email campaigns