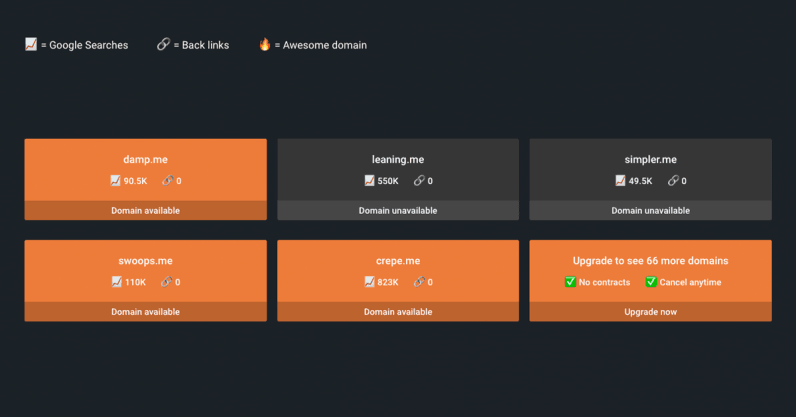 Coming up with a killer idea isn’t the hardest part of launching a tech startup. Neither is building something people ultimately love.

Coming up with a snappy name? That’s the hard bit.

Maybe it’s just me, but it seems like most of the good names have already been taken, leaving budding entrepreneurs to wade through the dregs to find something that they don’t completely hate.

One site that’s a bit of a help is Domainz, which finds non-shit domain names that aren’t being sold for the collective GDP of a small Pacific Island nation. Most cost just a few dollars on GoDaddy (or <insert your favorite domain registrar here> — I’m pretty evangelistic about Gandi, myself).

It also highlights potentially interesting domains under geographical TLDs, like .co.uk, .fr, and .ca, which I imagine would be handy if you’re willing to forgo startup kitsch for regional targeting.

New domains are added daily, and most are actually pretty good. Like, you can imagine a company being called “laptop.fm.” No idea what they’d sell though. Maybe some form of portable computer device?

And if you work in sports medicine in the former Soviet Union, doping.co is at your disposal. (Doping.co — putting the performance in “performance enhancing drugs”.)

It’s worth pointing out that Domainz only shows you a handful of the premium domains it’s uncovered. To see the rest, you’ve got to open your wallet and fork out either $15 monthly, or $150 for the entire year.

That’s a lot, and if you’re only likely to buy one or two domain names, you probably won’t get much value from it. That said, if you’re what the kids call a serial entrepreneur, or are in the business of buying domain names and then flipping them for eye-watering sums, it’s a bit of a bargain.

Of course, Domainz isn’t the only cowboy in the quirky-but-cheap-domain-names rodeo.

A few months ago we wrote about a site that helps people find emoji domain names. If you want to build a site that caters to teenagers and people who bought the touchbar version of the MacBook Pro, you can check it out here.

But if you’re looking for a more conventional brand for your upcoming tech company, you’d be wise to pay Domainz a visit. You can find it here.

And please, whatever you build, don’t put it on the blockchain. I’m begging you.

Read next: Review: BattleTech is a brilliant display of turn-based aggression