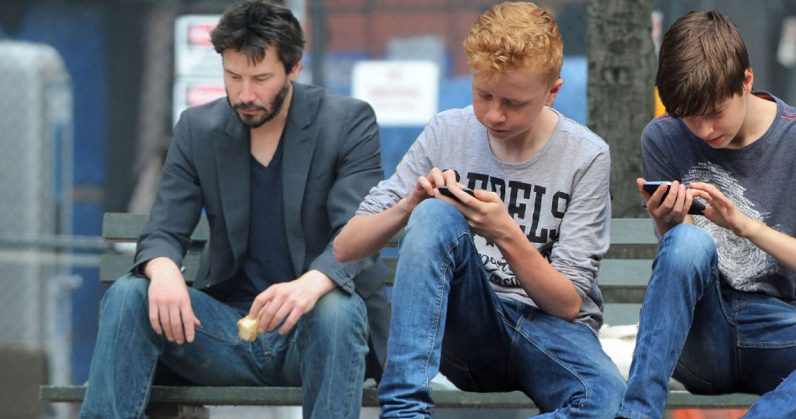 While it’s not worth rehashing the details, I believe most of us would agree that smartphones are both good and bad.

On the one hand, we have a device that holds the vast majority of human knowledge. It’s an invention responsible for a shift in power that democratizes information and empowers those most capable of dispensing it — in theory, at least. On the other, we have a doomsday device responsible for wrecking societal norms (for better or worse) and leading to a population that’s sleep deprived, anxious, and generally unhappy — among other things.

Ignorance, as they say, is bliss.

But we’ve come too far. There’s no turning back now. It’s hard to turn off a device that’s equally up for the task, whether it’s settling a drunken bet at the bar, or figuring out that one line in “Gucci Gang” that, uh, wasn’t Gucci Gang. It’s a device that connects us friends and family both near and far, or serves up a gentle time waster in the form of games and apps designed to suck the life out of you through addicting feedback loops.

Smart phones are useful, but they are also incredibly addictive, and that addiction is at the epicenter of Silicon Valley’s effort to grab an ever increasing percentage of our minds. In that a substance or behavior controls us, it becomes our master, and that just won’t do.

With this, Toups set out to create a plan to strip the addictive nature of the smartphone, thus leaving only what was necessary, what made the device so desirable to begin with. In a four part plan, Toups proposed we:

2.) Move apps responsible for the dopamine response that keeps us glued to our devices. On his home screen, he left non-sexy apps like Settings, a password manager, audio books, an interval training timer, and a translation tool. Those that remained after the initial purge were moved out of sight and into a folder.

3.) Turn on Do Not Disturb. From 9pm to 6am, Toup’s phone remains on Do Not Disturb mode, thus blocking calls, notifications, and the annoying dings and pop-ups that keep us coming back for more. This feature is automatically activated when you’re driving, as it should be.

4.) Turning off notifications. Toup then turned off all unnecessary notifications on his lock screen, those that made sound, and any notification from apps he didn’t need. He left badges for important things, like messaging apps.

That’s essentially it: the starter kit for ridding yourself of smartphone addiction. As with all things, it’s not perfect and it certainly won’t work for everyone, but it’s a great start. From there, Hacker News hit the ground running, offering some other great additions to the strategy. It’s worth browsing the thread, but here are some highlights:

Another thing I do to limit my phone’s dopamine rush is to delete all of the social media apps from my phone and only access them via a browser. mbasic.facebook.com is significantly less addictive that the app, while still being useful. Sometimes when I really need a break, I’ll create a block list in the “Restrictions” settings on my iPhone and block Facebook, Reddit, Twitter and HN completely. I wish that there was a way for someone else to be able to remotely manage those restrictions for me, so I could uninstall all of the time-suck apps from my phone and only re-install them by getting permission from a friend who could help me honor my intentions.

One huge distraction-enabler is the fingerprint sensor. It makes things too easy for me – I put my hand in my pocket, put my finger on the sensor, and by the time it’s in front of my face I can be mindlessly browsing reddit.

So I would add the following tip: disable the fingerprint sensor if you have one (also face recognition, etc), and replace it with an inconveniently long password. This way you really need to think about whether it’s worth the time to open your phone.

For some really fascinating insight, including things you can do at home to try and curb your smartphone addiction, check out the entire thread over at Hacker News.

Read next: Report: Google Play Music will be killed off and replaced by YouTube Remix this year