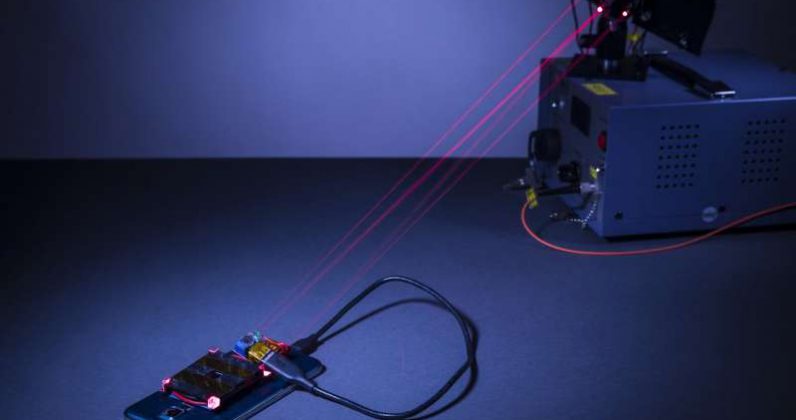 Even the most futuristic of devices start to feel dated when you plug them into charge. Sure, there’s wireless charging, but it’s just plugging in your device without actually plugging it in, right? I mean, you’re still plugging in the mat that it sits on to charge.

You know what sounds futuristic? Lasers.

Researchers think so too. A team of scientists recently discovered a way to charge our favorite devices using laser beams. Using a narrow, invisible beam from a laser emitter, the researchers discovered they could successfully charge a smartphone from across the room — and potentially just as quickly as using a standard USB cable.

The team mounted a thin power cell to the back of a smartphone. The power cell harnesses the power of the laser, and charges the phone through the standard charging input.

To avoid a potential micro-sized Death Star situation, the team added a metal heatsink ti dissipate excess heat from the laser, as well as a reflector mechanism that shuts the beam off if someone moves into its path.

“Safety was our focus in designing this system,” said co-author Shyam Gollakota, an associate professor in the UW’s Paul G. Allen School of Computer Science & Engineering. “We have designed, constructed and tested this laser-based charging system with a rapid-response safety mechanism, which ensures that the laser emitter will terminate the charging beam before a person comes into the path of the laser.”

Currently, the beam is only capable of about 2 watts per hour on a 9 square centimeter (15 square inch) area from about 4.3 meters (14 feet). According to the research paper, however, this is modifiable to expand the charging beams radius to around 100 square centimeters, from a distance of 12 meters.

I wouldn’t expect to see laser charging in the near future — especially with the current device market moving slower than molasses in accepting wireless charging — but, fingers crossed, it could be what’s next. You know, assuming nobody blows up.

Read next: SpaceX's satellites for beaming internet access to earth are now in orbit