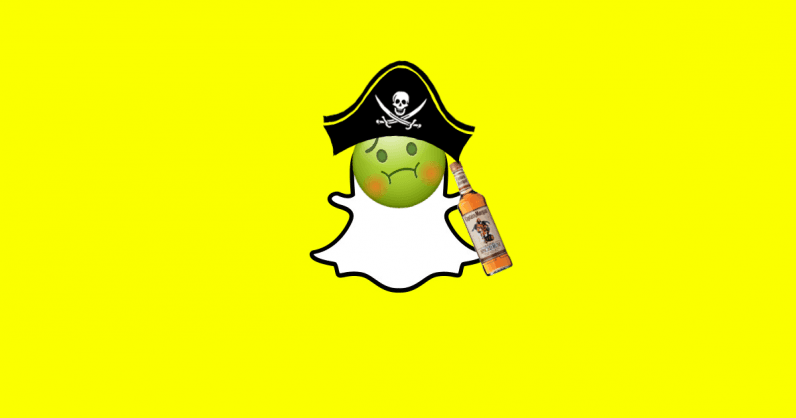 The UK’s Advertising Standards Authority (ASA) has upheld a complaint against a Snapchat lens from global drinks maker Diaego, which allowed users to make their face look like Captain Morgan, over fears it may appeal to children.

The lens also included two glasses of a drink clinking, followed by text that said “Live like the Captain,” a voice-over that said “Captain,” and some cheering.

The ASA’s concern was this advert may be seen by those under the legal drinking age, and that it would be attractive to them.

“We considered that the specific interactive and augmented elements of the lens, such as the user’s face being made to look like a buccaneer, the clinking glasses, references to “Captain” and the cheering, were likely to appeal particularly to those under 18,” explained the ASA.

The legal drinking age in the UK is 18. Snapchat, on the other hand, is a teen icon and wildly popular with people under that age.

Defending itself, Diaego said the lens was specifically targeted at users with a registered age of 18 or above. The ASA criticized this as it relied upon self-reported ages, which weren’t verified.

It’s not uncommon to see a younger user inflate their age in order to gain access to a particular website. And Snap, like the majority of social networking sites, are limited in how they can verify user ages.

Diaego also argued the lens itself was “consistent with the brand trademark and packaging,”

As a side effect of this ruling, Diaego has suspended advertising on Snapchat — not just in the UK, but globally — while it assesses new age verification safeguards brought in by the social media giant.

The drinks industry is a big spender when it comes to advertising. Diaego’s marketing spend in 2017 alone was £1.8 billion, according to Statista. Snap can’t afford to let this issue linger.

One alcohol company that’s vocally wary of Snapchat is Heineken. In 2014, it paired up with Snap to advertise during the Coachella festival. In 2016, Snapchat played a pivotal role in a marketing campaign that took place in Australia.

But in March of last year, Heineken said that Snapchat’s audience was too young for it, and it planned to pivot towards Instagram.

The brand’s director of global sponsorships, Hans Erik Tuijt, is quoted in The Drum as saying: “Snapchat’s audience is still too young because as a responsible alcohol producer we want to make sure we market at least 75% above legal drinking”

The good news is that Snapchat’s audience is getting older. As the service has matured, so has its demographics. But it remains to be seen if this is happening fast enough for it to keep its beverage advertisers happy.

In a statement emailed to TNW after publication, a Diaego spokesperson said “we have a strict marketing code, take our role as a responsible marketer very seriously and acknowledge the ASA’s ruling.”

We took all reasonable steps to ensure the content we put on Snapchat was not directed at under 18s – using the data provided to us by Snapchat and applying an age filter.

We have now stopped all advertising on Snapchat globally whilst we assess the incremental age verification safeguards that Snapchat are implementing.

Snapchat also got in touch. “We are disappointed with the ASA’s decision. While more options for age targeting on Snapchat have been added since July, we disagree that Diageo intentionally directed its Lens to an underage audience when it applied the accurate 18+ targeting available at the time,” said a company spokesperson.

The ASA acknowledges the evidence we provided showing that ages supplied by Snapchatters are a robust way to age-restrict ads. Snapchat now offers amongst the most sophisticated targeting in the industry and by introducing new tools such as Audience Lenses and incorporating additional signals into our targeting, advertisers have a reliable and flexible way to ensure their ads reach the right audience.

Update: This piece has been updated with comment from Snapchat and Diaego.

Read next: Bitcoin's first block was mined 9 years ago today, the reward was 50BTC