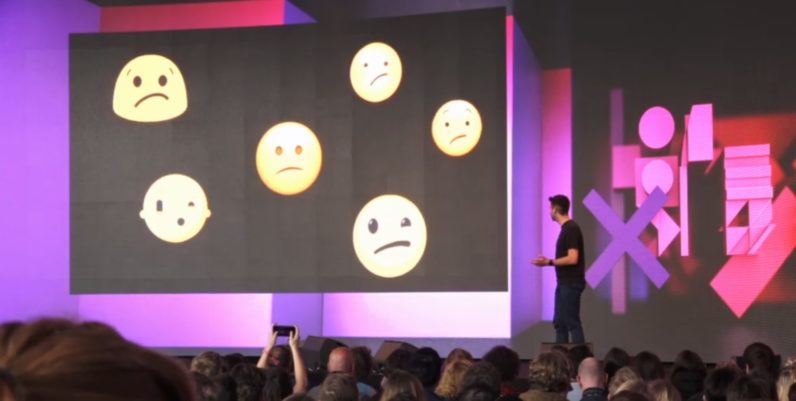 Emoji are weird. While there are enough of them that people somehow manage to use them for entire conversations, there always seem to be odd omissions. Why are there about 10 different types of trains, for instance, but there is no disco ball? Why did it take until 2017 to approve a dinosaur emoji?

At the TNW Conference 2017, we got some insight. Jeremy Burge, Founder of Emojipedia and member of the Unicode committee that decides on new emoji took to the stage to discuss some of the process behind adding new emoji.

One key point Burge emphasized is to hold back on asking “this but not that” questions, like the trains versus disco balls example above. The fact of the matter is that much of it boils down to one answer: Japan.

Japan had emoji before everyone else, and as such many emoji we currently see are holdovers that were only particularly relevant to that country – and Japan is often just weird in general.

Unicode also brought all of a typeface known as Webdings (similar to, but not quite the same as Wingdings) to the platform, so there are plenty of not-very-useful glyphs from there too.

The truth is, much of what the Unicode committee does is to ensure compatibility between various platforms and standards. The process is fairly slow, and you can’t encode everything – someone has to curate what gets added and what doesn’t. Vendors exacerbate this – Unicode designs standards but its ultimately up to device-makers to actually implement them.

So instead of complaining about those emoji you’ll never use but are already there, instead focus on how you can suggest new emoji. Anyone can submit emoji to Unicode, and with enough nagging your favorite companies, you might just get that emoji you’ve been waiting for.

And if all else fails, perhaps consider reappropriating those emoji you don’t use. After all, emoji take on a life and meaning of their own.

Take the peach 🍑; according to Burge, it’s only used to refer to the actual fruit about 7 percent of the time. The rest, it’s either probably something sexual or a butt. Remember when Apple tried to make it look less like a butt?

Yeah, that didn’t go over so well. The emoji is in the eye of the beholder.

Read next: Where to start when building a killer product