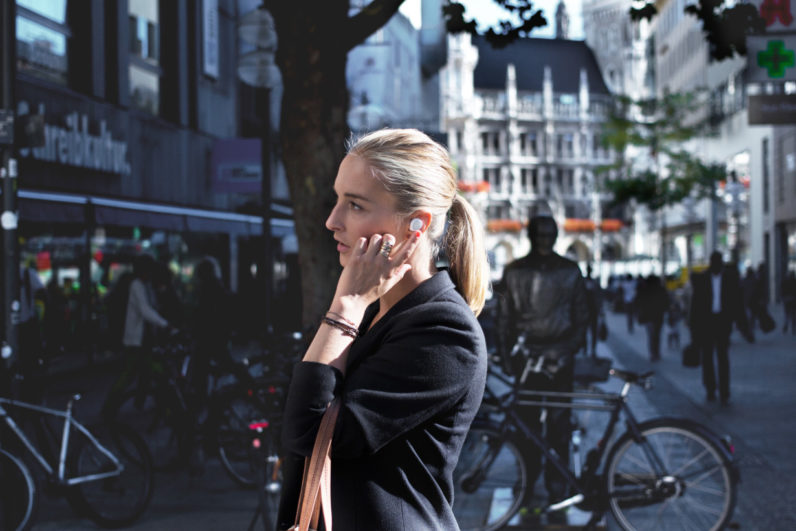 Growth Story is a new 4-question format we’re doing about startups finding and influencing a defining metric that helped to really grow their company.

Back in 2013, the Dane Nikolaj Hvidd launched Bragi by himself in his basement. Now, a mere four years later, he employs 180 people stationed around the world – Munich, New York City and Hong Kong – and managed to go from zero to selling over 100,000 headphones in the span of just a year. This earned Bragi the title Germany’s Fastest Growing Startup in our Tech5 competition.

Wondering how he did it? We spoke to him to find out which factors contributed to Bragi’s success.

Bragi produces audible contextual computers that are sold as headphones. In fact, they are in-ear computers that enable you to do things you couldn’t do before, and protects you while doing so.

The way it works is simple. The earphones have embedded sensors that understand what you’re doing, where you’re doing it, and how you’re reacting to it.

Our main customers are innovators, early adopters, and technically adept people. What really surprised us though, is that there are a lot of people who see that this product can fix a certain problem for them. This has really given us an edge.

One example of this is a lady suffering from severe tinnitus. When she plays a relief tone through her Bragi headphones, her tinnitus is soothed. Because of our design, she can both play the tone and still listen to conversations with her friends. She was never able to do this before whilst using regular headphones.

Hearing is a unique sense, and very different – from an interaction point of view – than seeing for example. Hearing is what we call a serial or a parallel discrete interface. Let me explain that.

When you look at something, everything else is not in focus. If you have five different screens with five different football matches, how many of them can you focus on? Just one. But anyone can sit in a restaurant, listen to a friend speaking, with music playing in the background, and even if someone drops a cup of coffee on the floor, you can very broadly focus. Your vision can’t do that.

A bit of growth perspective: we are in the same category as the Apple AirPods and other similar headphones, and what we managed to do is go from zero percent market share to around 13% market share in a single year.

Our two competitors above us are Samsung and Apple at the moment. But if you look at the real statistics, we have a 100% market share of in-ear computers, which is very dramatic. People have been copying some aspects – but they still don’t have the dynamics, the adaptability and the computer.

The first of two metrics we have been looking at are our efficiency towards our story points development – in other words, how good are we at executing our development from an R&D perspective and turning that into things that people can understand and track.

We’re working on an agile scrum factor, so we create story points for short and long term, and check how they’re executed and how they’re being followed up on, and we check how much time development should be taking.

We’re tracking the time spent on all those things, and we see how much actually results from the R&D time. We hold that against both the amount of bugs that we have in the product and how many of those bugs are being solved but also how many new features are being set up. It’s quite an intricate setup but the number that we get out is the efficiency of R&D development.

We’ve been very focused on increasing that efficiency all the time, and never going back. That has created a dramatic change on how we develop.

When I started the company in 2013, I sat in a basement by myself, and a year later we had 16 people, and two years later we had grown 120. When you grow that fast, you have incredible challenges in structure, in organization, and in processes – very boring to talk about, when you’re looking at new products that come out, but that’s a real challenge. It’s how much effort you need to put in doing certain things, and the less effort you need to put in, the more efficient you are and the smoother it goes.

Things that were an immense human achievement in just in persistence just two years ago, we do easily today on some sides, and that increase in efficiency is also a metric of showing how much the company matured.

To recap, we’re looking at the internal R&D efficiency and the sell-through per store.

For the R&D side, we noticed halfway last year that we put in a lot of effort without the outcome being where it should be. So we started placing a lot of effort in fixing that. On the sell-through side, I think that became very dominant as of September last year. It was something that we knew all along because we’d done it before, but it just became very, very apparent for us that that’s what we have to change.

The reason was some retailers were saying, “We can’t sell the product,” and other ones said, “This is the greatest thing we’ve ever had.” We needed to find out why there was such a difference.

In terms of making our R&D more efficient, we work in a way that we match different capabilities across the product. So, you could have a neuroscientist, a designer, an embedded software engineer, a mathematician, and a production test engineer working in a team across systems. This means that they’re much more efficient because they work in parallel rather than in serial mode. So, instead of taking one problem, solving part of it and passing it on, we start out solving problems together from the beginning.

Another thing that we have to be much better at is explaining the product, and what it does for that specific person. The other part is to stand out on the shelves. When a customer is testing products out, why do they choose you rather than someone else? It’s something that we’ve done okay last year but we want to do it much, much better this year. We have to look at the companies that do this really well, see how they do it, and then see if we can add a twist of our own.

Some companies have grown just because they’re good at that.

It’s a maturing experience rather than a ‘let’s go crazy and build some crazy technology’ thing.

Read next: Opera Max wants to stop Facebook from draining your data allowance