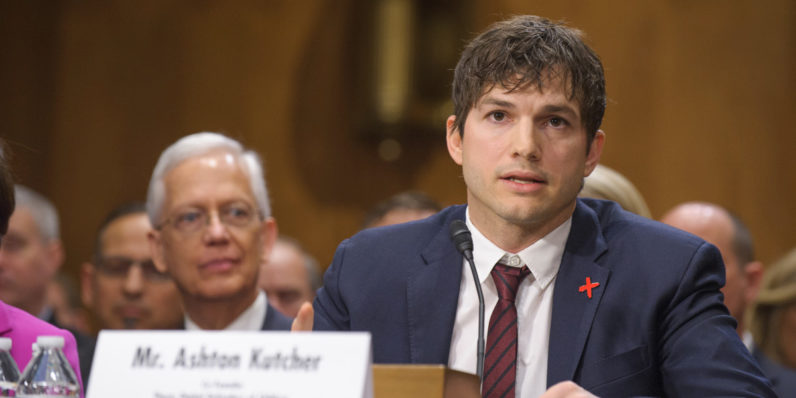 Although Ashton Kutcher is best known for his roles in massively popular sitcoms like That 70s Show and Two and a Half Men, he’s only just begun some of the most important work of his life.

In 2009, the Iowan actor founded a non-profit organization dedicated to fighting human trafficking and child sexual exploitation. The NGO changed its name to Thorn in 2012 and focused on building mobile and Web-based tools to help further its efforts, while partnering with major tech firms and government agencies to expand the impact of its work.

The non-profit clearly has its work cut out for it: In 2012, the International Labor Organization estimated that there were roughly 21 million human trafficking victims worldwide, of which about 5 million were being sexually exploited. According to Thorn, the internet is largely to blame: It found that 63 percent of child sex trafficking victims that it surveyed were advertised online.

In addition to researching the circumstances that facilitate child sex trafficking, Thorn is also building tech to help fight it. In 2013, it worked with Twilio to create a shortcode that victims of sexual exploitation, as well as witness could text to seek help discreetly. From its launch through last June, the system enabled 3,808 conversations via text message that led to 3,631 substantive cases and 18 potential victims extracted.

More recently, it launched Spotlight, a Web app that assists in trafficking investigations by helping them sift through thousands of classifieds and forum posts advertising escort services from several sites. It uses machine learning to analyze data and identify suspicious ads that may involve minors, matching images and generating profiles so individual cases are easier to track.

Thorn announced in October 2016 that Spotlight had helped identify more than 6,300 victims of sex trafficking in the US, of which nearly 2,000 were children. The tool is now used in all 50 US states by 780 agencies.

Now, the organization is gearing up to take on traffickers who operate on the Dark Web. It’s building a tool called Solis, a tool to analyze activity on the underground network and help investigators uncover information about minors being exploited across the globe. It’s currently being tested by Thorn’s international partners, and it’s already helped rescue 40 children.

Hopefully, Thorn will be able to reach more people with its high-tech tools. Today, Kutcher testified before Congress on ways to combat human trafficking and slavery. Skip ahead to 15:38 in the footage below to watch it.

Speaking before the Senate Foreign Relations Committee, he called for funding for tech tools to combat child sex trafficking, fostering public-private partnerships to come up with such solutions and fixing the pipelines that lead minors in and out of trafficking networks.

It’s great to see celebrities standing up for causes they believe in; what’s particularly notable about Kutcher’s approach is how Thorn is following tech trends and adapting their processes to target traffickers as quickly as they change their modus operandi. Hopefully, initiatives like these will help curb devastating crimes like sex trafficking not just across the US, but around the world.