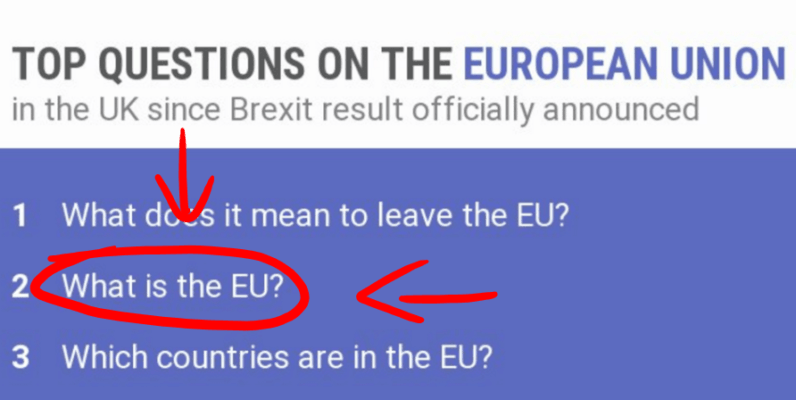 The UK has voted to leave the EU by an extremely narrow margin, and the world is in turmoil.

However, in an extremely reassuring sign that everybody knew what they were doing when they voted, Google trends indicates a huge spike in searches for “What is the EU?” after polls had closed.

"What is the EU?" is the second top UK question on the EU since the #EURefResults were officially announced pic.twitter.com/1q4VAX3qcm

Other encouraging after-polls search trends include “What is Brexit?” and “What will happen if we leave the EU?”

Of course, these questions are partly people wanting clearer answers about the effects of leaving the EU. Nonetheless, they’re an indicator that a significant number of people didn’t really know what they were getting into when they voted.

Leave voter on BBC: "I'm shocked & worried. I voted Leave but didn't think my vote would count – I never thought it would actually happen."

Guess it’s time for Britons to invest in gold.

Read next: Trulia teams up with a hip-hop icon to 'Hammerfy' the home buying process