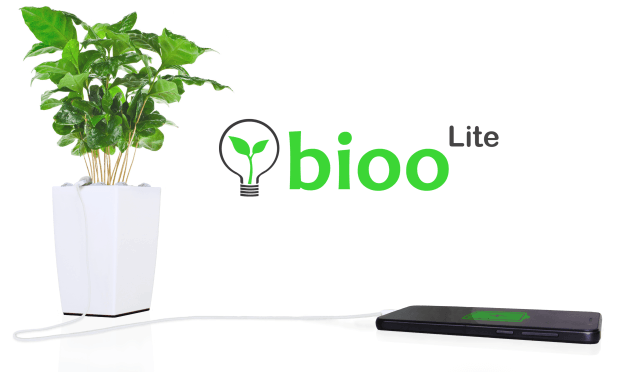 A Barcelona company has managed to turn the humble house plant into a bonafide charging station for your smartphone. Theoretically it’s an eternal battery, all for $112 – if you get in on their early bird scheme.

Bioo Lite, made by Arkyne Technologies harnesses photosynthesis – something the plant does all by itself – to turn sunlight into electricity.

It’s currently smashed its Indiegogo fund raising goal of €15,000 and still has a month left.

Now, it’s not quite as simple as sinking a USB cable into the soil and hoping for the best. Beneath the plant sits two smaller pots of bacteria that react with water.

Once your plant starts converting sunlight into energy, the compounds created in the soil trickle through a semi-permeable membrane covering the bacteria pots.

The bacteria then feeds on the compounds creating electrons that are gathered by a nano-wire network. Those electrons are stored in a battery, also at the bottom of the pot, which is connected to a USB cable you keep on the surface.

The process is so efficient, claim Bioo Lite’s creators, that you’ll be able to recharge a smartphone three times a day – and can even be charged over night.

In terms of the speed of the charge, the output is 3.5 volts which is roughly equivalent to the power that comes out of a USB port on a computer, the creators claim.

Now, unlike the abuse your charging cables usually endure, if you want to keep your battery going you need to keep the plant alive. So don’t go Ivan Drago on it.

The amount of charge also depends on the type of plant living inside the Bioo Lite. Cacti are terrible, where as green leafy plants are A-OK.

The team are looking to start shipping the pots at the end of this year. So if you’re looking to de-clutter and add some green to your workspace, this could be the solution you’ve been waiting for.

Phone-osynthesis : Bioo Lite is a pot that uses plants to charge your phone on Digital Trends

Read next: Advertisers finally get the message: Consumers don’t like crappy ads