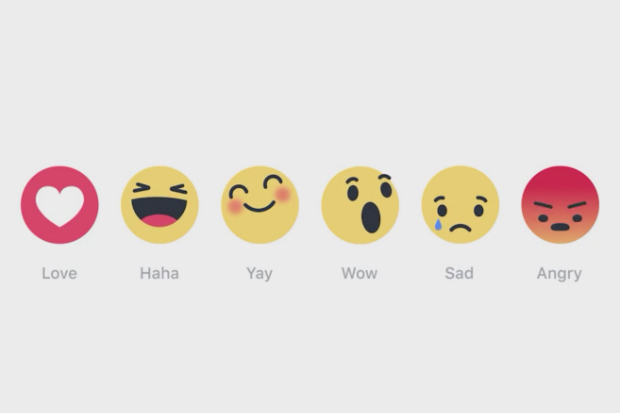 We’ve been watching Facebook’s experiment with its ‘Like’ button with anticipation and now chief product officer Chris Cox has confirmed Reactions are going global.

Within weeks, all Facebook users will be able to react to any post with ‘angry’, ‘sad’, ‘wow’, ‘haha’ or ‘love’ emoticons.

Although deployed in testing, which spanned six countries, ‘yay’ did not make the final cut as “it was not universally understood,” a spokesperson told Bloomberg.

As well as consulting with sociologists, the team analyzed the most common reactions across its network in order the refine the final selection.

To use one of the new reactions, you’ll have to hold your thumb on the ‘Like’ button to scroll through and select the one that sums up your mood.

Rather than adding one icon for each person that reacts, Facebook will tally up the bouncing emoticons, in order to reduce clutter.

So Facebook has finally decided on our new universal visual vocabulary, and with it’s eyes on both India and Europe’s internet, it looks like there’s no area of communication that Facebook doesn’t want to take control of.

➤ Inside Facebook’s Decision to Blow Up the Like Button [Bloomberg]