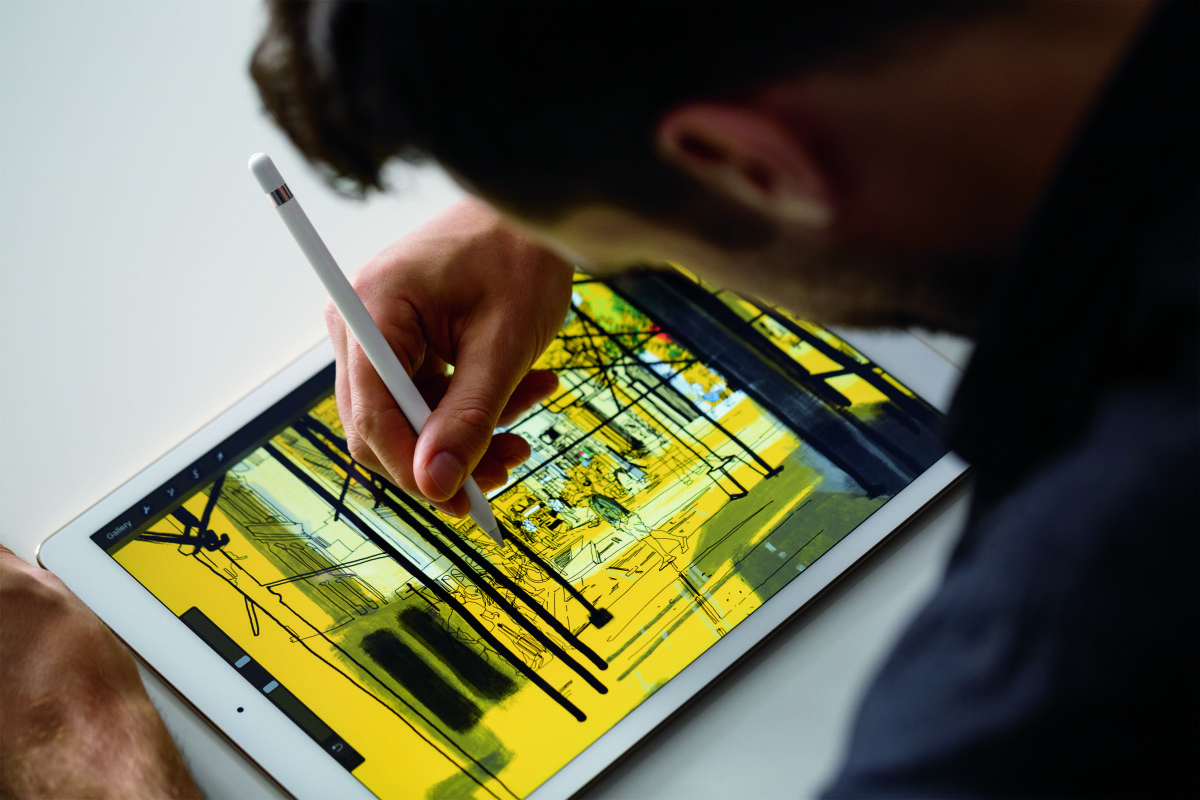 The iPad Pro is a peculiar device. People don’t seem to know what it’s for. Is it a sketch pad? Is it a laptop replacement? Is it a big tablet? Is it a very small table?

Turns out it’s all of these things and more. It’s a beautiful device, with a gorgeous screen, one that I’d argue outdoes the new MacBook. It has a responsive stylus. To all the naysayers that suggest Steve Jobs would roll in his grave, it doesn’t require you to use it, it’s an option, if you want to draw on it, you gigantic doofus.

It has two keyboards: Apple’s own and Logitech’s CREATE that when they work (we’re getting there) are fantastic. When they can keep up… Okay, I’m going to stop.

Apple has completely screwed up with the iPad Pro, and it’s all their fault and it makes no sense. When it works, I love this device so much. The problem is that I keep tripping over a string of dopey decisions.

Let’s break down the issues.

It’s been reported widely how badly Apple stocked the iPad Pro Pencil and keyboard. The ones I ordered on launch day have only just arrived. The Pencil, as I said, is optional. I’d argue many people won’t need it.

The keyboard is very much necessary. How Apple, a company that has billions of dollars and is run by some of the greatest minds in technology, could screw up on this level again (Apple Music, though I like it, is buggier than a steak left inside a humid cupboard) is beyond me.

It’s so inherently stupid to market a product like this transparently as a laptop replacement without the keyboard. Microsoft should be laughing in their face.

When my Logitech keyboard stopped working – in my case, it is consistently having lag since the update to 9.2 (which I’ll come to later). Some report it’s always had this random failure – I’m having trouble finding stock anywhere to replace the damn thing.

If you’re going to brag about (and actually deliver – it really is great) a laptop-style keyboard from a third party, you probably want to have it in stock. It is available. In some places, but it has a hefty wait online.

If you want to define an entire new industry, you probably want to fight hard to make sure people don’t have trouble enjoying their devices. Note, this is also weeks after launch.

On another note, the Logitech CREATE is great when it works, but my lord. It’s huge. What in the world?

iOS 9 is at times beautiful – you can snap apps together and use them side by side, in a way that keeps me more focused than on my Mac (that’s my fault, but still).

However, iOS 9’s multi-tasking functionality is also a horror-show, a confusing mess of very awkward terms that borders on a thoughtful exercise in deceptive advertising.

Yes, every single app works with “slide-over” – being able to take a quick peek at an app while rendering the other one useless. There’s also the classical criticism of a lack of file portability – not being able to bounce one app between another, even as they’re up, is kind of stupid.

Furthermore, it may be time to give me a cursor, at least to copy from one document to another. If I’ve got a keyboard, let me scroll and hold shift and copy in more than just Word. C’mon. Basic computer thing here.

Multi-tasking is half-baked if it requires every developer to add whatever it is to whatever app. It requires you to awkwardly pull a tab out from the right, and if there’s a little line you can split-view it.

Even with slide-over, it’s particularly annoying when you use Google Hangouts, as this launches the hangouts video chat. YouTube doesn’t work. It’s a good idea that I could tolerate if it worked with every app.

The fact they’d release it without complete support for the most common apps is all but handing Microsoft a card saying “hey, uh, wanted to make sure the Surface 4 and Surface Book did well for you.”

Awkwardly, iOS 9.2 has made quite a few people using Logitech’s CREATE iPad Pro keyboard experience lag that makes the entire experience totally useless. I type relatively fast (100 or so words-per-minute moderated) and the keyboard, before the update, worked perfectly.

Now, even if I poke slowly at the keys, it’ll still miss the occasional press. Logitech’s customer support also said they’d get right back to me hours ago. Thanks guys!

Finally, they’ve still failed to add plugins to Chrome. That may be on Google. Or it may be on Apple’s needlessly draconian hold of the ecosystem, which they seem very competent at releasing with no rhyme or reason in certain places but not in the ones that count.

Also it’s about time my icons just organized themselves, thank you. It’s a bloody waste of time.

Standing, for some reason, inside a Reno-based Apple Store, I watched a salesperson give an impassioned pitch of the iPad Pro, specifically the coolness of having the built-in cellular connection.

He spent ten minutes giving it. At the end of the pitch the customer wanted one. Guess what? It wasn’t in stock. The guy didn’t even check, he just knew. “How about just the WiFi one?” Nope, that too was out of stock. The guy sighed and turned down a 32GB iPad Pro. I should add he also gave a vigorous demo of the Apple Pencil and the keyboard.

These theatrics were ultimately useless – a waste of the agent’s time, but worse a cruel waste of the customer’s time, one that will embitter him toward Apple. Chirpily, waggling something someone can’t buy in front of their face – when you can easily have said at first, “so, just so we’re clear, we’re out of stock of these ones, and the Pencil and the keyboard” – is just a shitty move.

This is an anecdotal example I recognise, but one that highlights Apple’s epic dropping of the ball.

The App Store is going to be the first place many users go. Here’s an idea: Have a honking great ad that says “new apps for your iPad Pro.” A big one. Make it the first thing they see. There was one, don’t get me wrong, but it was buried within separate categories or within the strings of slideable panels that are there I assume to trick you into downloading Clash of Clans.

I have no idea what’s awesome on my iPad without googling the (mostly useless) articles that say, “try Microsoft Word” or, “try this game you have already it looks good on it.” Apple seemingly forgot to onboard people toward anything other than downloading the Apple Store app, so you can go and buy more physical devices.

This is compounded by the fact that the gaming side of the App Store has become a trash-heap, so bad that Apple has had to shamelessly add a, “pay once to play” section.

For a device so clearly built for the traveler, even if you wanted to play one of the thinly-veiled pyramid schemes that require energy boosts or extra whatever-it-is things to keep going, I sure hope your in-flight WiFi works/exists. This is a problem that’s entirely the App Store’s and across the string of iOS devices I own (iPhone, iPad Air 2). The iPad Pro, of course, makes the problem much bigger.

Apple could have avoided all of this. I realise calling up the Google Hangouts team (I hear a lot of people use it!) or perhaps the Trilian team and saying, “people love to talk online, can you make sure we have multi-tasking up” may have been embarrassing, but this is worse. The core enjoyment of this device is centered around using two apps at once.

Yes, I can use Slack and Word at the same time, or Outlook and Word. Hangouts, Google Docs (if this has been fixed, great. Last time I tried it didn’t work), the Google app, YouTube – if this is Google being stubborn, how come Chrome works?

Why can’t I select my Apple Music and keep it up while I browse the Web? Why is this even a software issue that could present itself – did nobody think of this?

Not shipping 80 percenrt as many keyboards as they did iPad Pros (unless they did and they just had that much demand) is sheer foolishness. This, along with the pencil, is embarrassing beyond words for the Apple hype-machine. You can’t take us to the future without the DeLorean, guys and girls.

All in all, the iPad Pro has the potential, in its moments of glory, to be a beautiful, portable powerhouse, one I’d rave to friends about. The cellular connection is excellent.

If I was able to use hangouts, if my keyboard wasn’t broken and I could easily replace it with another, if multi-tasking just worked with everything, this would replace my Macbook. But it can’t, not because it’s incapable of doing so, but Apple appears unwilling or unaware.

I worry for Apple

Music is consistently buggy. On installing iOS 9.2, I had to re-download every single song again so that I wouldn’t accidentally stream them (or hey, when I’m on a damn flight in airplane mode lose access to my music).

While Mac OS feels consistently crisper and smarter with each iteration, every time iOS steps forward it trips, dropping its groceries and blubbering for an alarming amount of time. The iPad Pro is the hardware realization of their failure to innovate.

It’s painful to watch, too. When it works, I love the Pro, it’s the iPad I’ve always wanted. It’s just my large, idiot son, incapable of doing simple things he’s more than capable of, failing college because he’s holding himself back.

Apple may not lose the tablet market, but they will lose marketshare. They will be forgiven for these mistakes, hell, even by me, the moment they’re fixed. But they are on a worrying trajectory that suggests they’ll keep making them, and one of these days it’s going to be bad enough that Google’s Pixel C might have a shot at hurting Apple.

Read next: Firefox users have another reason to drop plugins: Netflix just got HTML5 support