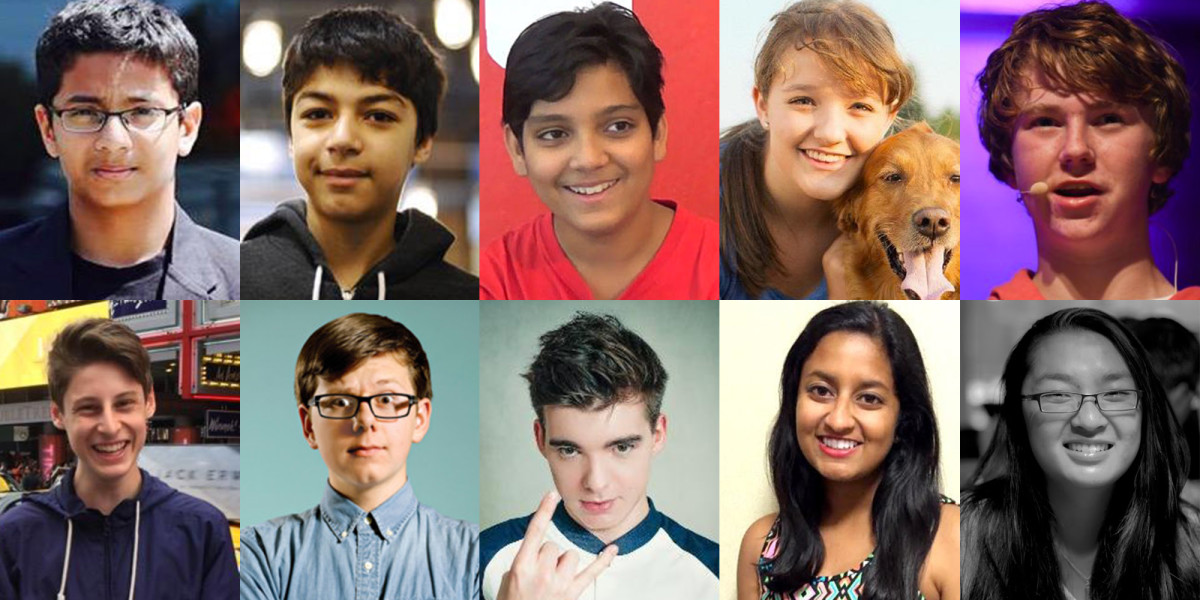 There was a time when the phrase ‘young entrepreneurs referred to people like Bill Gates and Steve Jobs, who founded Microsoft and Apple respectively at ages 23 and 21. Mark Zuckerberg co-founded Facebook at 19. Following this trend, entrepreneurs are getting younger and younger. So young, in fact, the latest crop of founders includes CEOs who haven’t yet legally become adults – some aren’t even old enough to drive.

Gone are the days of simple lemonade stands, and with it, hopefully the stereotype that children are unmotivated and lazy. With access to technology from the moment they are born, this generation is demonstrating just how innovative they can be and proving that age in no way limits aptitude.

It’s okay to shed a tear or two when you think of what you accomplished in your teens – I have yet to accomplish as much, and I’m in my thirties – but it’s nice to know that no matter how old (or young) you are, entrepreneurial success can be achieved for those ambitious enough to try. Below are a few (shockingly) young, inspiring business leaders finding success in the world of technology.

After ‘Googling’ how blind people read, this thirteen year old created Braigo, a Braille printer, with a Lego Mindstorms EV3 kit. Banerjee has since launched his first company, Braigo Labs, in order to develop low-cost machines to print in Braille. Intel Corp. recently invested in his startup.

TNW recently wrote an article on Ghodsi, the thirteen year old CEO of Slik Technologies, which allows you to search, filter and track companies based on specific criteria. This is his fourth startup endeavor and second role as CEO.

At twelve years old, this self-taught programmer began his foray into robotics as a “standout intern” for OLogic. He is the founder of Aleopile, a consulting company specializing in Robotics, Web Design and Printed Circuit Boards.

As the inventor of ICPooch, Martin founded her own company, impressed judges on America’s award-winning television show “Shark Tank”, and won top honors at this year’s GeekWire Summit all before she could drive. At fifteen, this high schooler has recently redesigned her previous technology in order to help the elderly.

Before he was a professional mobile-app developer, Casey taught himself how to program when he was nine and started his own company when he was twelve. Casey Games, an independent mobile game company, is one of the most successful in Ireland. In addition to mobile apps, Casey’s third company, Eventzy, an online event management and promotion site, was announced in November 2014.

Not every high school sophomore can say they’ve been courted by both Facebook and Google. That’s not true for Pasternak. As founder and creator of One App, after this ambitious sixteen year old’s iPhone game, Impossible Rush, enjoyed 500.000 downloads in the first 6 weeks, both companies personally called him to tour their campuses.

At the ripe old age of fifteen, Finman cashed in his $1,000 bitcoin investment for $100,000 which he then used to launch Botangle, an online tutoring program. Now sixteen, Finman most recently moved out on his own to California, applied for a Thiel Fellowship, and is currently auditing classes at Stanford.

Inspired by the world of hip-hop, seventeen year old Mach modeled his messaging app, FIVE, after custom hand signs similar to those used by rappers. Unbeknownst to him, FIVE would turn the Apple Watch into a great communication tool for International Sign Language (ISL) users and Mach is currently working on adding an ISL dictionary to his app.

Most entrepreneurs cringe at the thought of a pitch competition. At eighteen, Horn already had a competition win under her belt. The founder of KhodeUp, a four-week web development class taught at Future Light Orphanage in Cambodia, is the 2014 NCWIT Aspirations in Computing National Runner Up.

With advances in technology at their fingertips, this new generation of young entrepreneurs is sure to flourish beyond expectations. Track their success on Index and be encouraged knowing innovation is not limited by age.

Read next: How the happiest companies in America boost morale and the bottom line