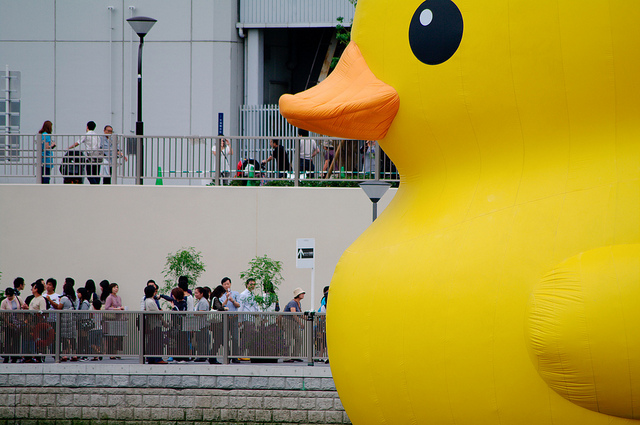 Over the weekend I saw a few tweets referring to Duck.com, a domain name that I had never really thought about. Clearly it’s quite valuable, since four letter domain names that spell out an actual word are nearly impossible to come by these days unless you want to pay millions for it.

Here’s what founder and CEO of DuckDuckGo Gabriel Weinberg had to say about the confusion in response to a post on the DuckDuckGo community site, which sits at Duck.co:

Yes, duck.com came as an asset in the unrelated On2 acquisition (On2 used to be known as Duck Corp). But it just sat there (pointing to this Duck Corporation history page) for a long time.

I first inquired about it on 11/4/09. After several attempts, I got back a response “from management” on 3/25/10 that they didn’t want to sell it. Understandable.

Now http://www.on2.com/ points to a Google explanation page about the On2 acquisition, yet http://duck.com/ points directly to Google search.

Google owns lots of domains that don’t point anywhere, or not to their main search page. That means there was an affirmative decision somewhere along the line to redirect that particular domain to their search product.

DuckDuckGo grabbed funding from Union Square Ventures last October and has a few twists to its search engine, like the ability to use !bang functionality in a search. For example, you could search for The Next Web on Wikipedia by typing “!wiki The Next Web”.

While Google isn’t doing anything “evil”, someone at the company clearly decided that Duck.com should redirect to its search engine. Is that because the domain name gets a lot of traffic from those interested in Ducks, or is it because another search player has entered the market with a similar name to the domain?

A fascinating discussion started on Hacker News about it over the weekend, with comments split on the topic.

Let us know what you think in the comments, should Google redirect Duck.com somewhere else?