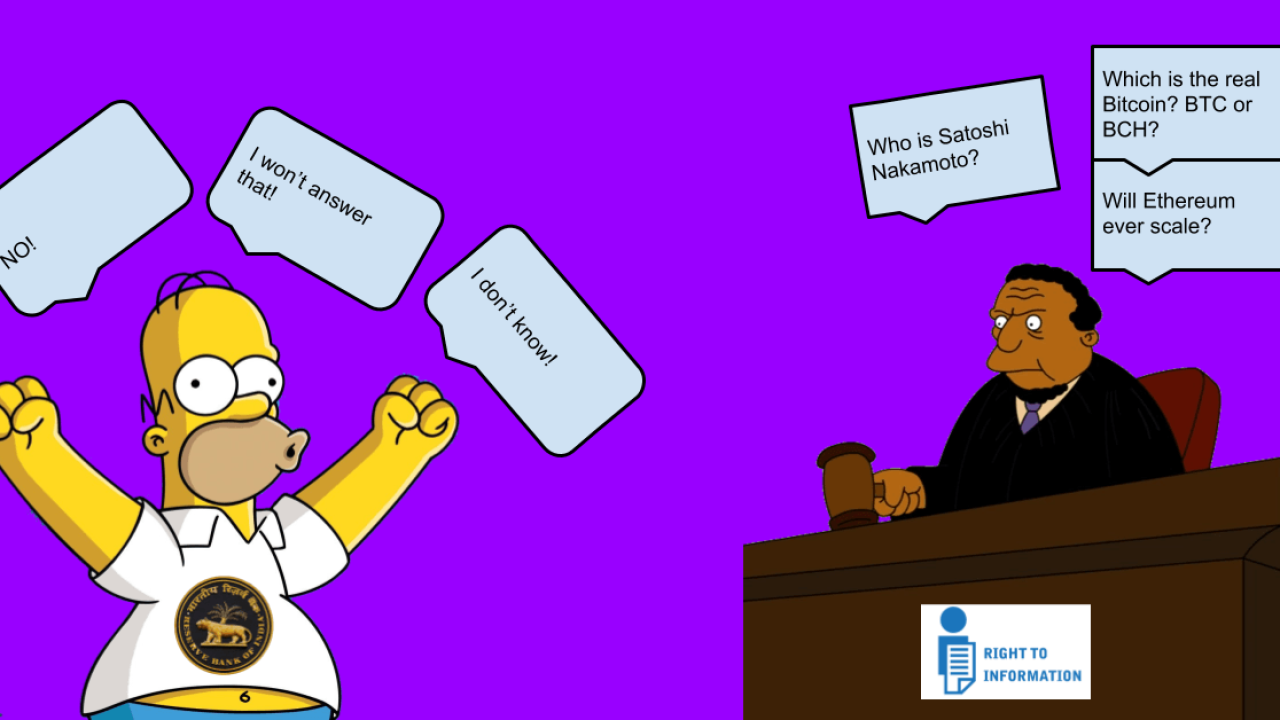 India’s central bank, Reserve Bank of India (RBI), has been repeatedly warning citizens against the risk of investing in cryptocurrencies since at least 2013.

After repeating the warning twice again in 2017, RBI let out a directive in April to ban all Indian banks from dealing with any cryptocurrency business. You would assume that RBI must have studied cryptocurrencies deeply to come to this conclusion, but you would be wrong.

In a response to a right to information (RTI) application filed by a local lawyer, Varun Sethi, the central bank has admitted they did not conduct any research or consult finance experts before taking this decision.

For some background, under Indian law, every citizen has the right to information from the government. If someone files an application seeking information from any public authority, it is mandatory to respond within 30 days.

RBI responded to Sethi’s query, but didn’t elaborate much on its answers. In fact, almost all the answers are either “No,” “We are not legally bound to answer that,” or “We don’t have that information.”

Here are the key takeaways from the RTI:

So, what has RBI done to actually examine cryptocurrencies? In the longest answer to the RTI, RBI has described the list of ‘committees’ the body has been a member of, and the number of circulars it has issued against the risk of virtual currencies. But no mention of any research or consultations that the banks undertook. That’s right.

The petitioner is understandably not content with RBI’s response.

“A restriction of this magnitude should have beeb backed by expert opinion and research,” Sethi told Hard Fork. “We are already drafting the next steps — appeal under RTI and separately a case under Banking Regulation Act for a face to face representation ​with RBI in this matter.”

“Public Interest Litigation is something that is on the lines, however we shall be gathering more evidence on the matter and then ​proceed with it,” he further added.

Sethi further said that this is not the first he has filed an RTI with a government body in India regarding cryptocurrencies.

“We earlier filed 5 RTIs in October 2017 with Securities and Exchange Board of India (SEBI), Reserve Bank of India, Income Tax Department, Ministry of Corporate Affairs, and Goods and Services Tax Department — however the responses were either vague or incomplete,” Sethi told Hard Fork. “We were not able to publicize the reports at the time, hence we built a website and got more active on twitter to share the results of our research to bigger audience. Our team would continue to research on the topic and communicate with more government departments to understand government’s perspective.”

When RBI banned banks from dealing with virtual currency businesses, it sent a wave of frenzy in the Indian cryptocurrency community — leading to multiple lawsuits being filed.

The attorneys involved in those lawsuits are now saying that they can use the RTI response to make their case against the central bank.

“This RBI response has cemented our case ahead of the hearing in SC. The grounds on which our writ petition has been filed is that the RBI has not done enough research to ban a business completely,” Rashmi Deshpande, one of the lawyers fighting out the case in India’s Supreme Court told local outlet, Economic Times.

The Indian bank is not the first to react frantically to cryptocurrencies. In fact, it has been a pattern all over the world.

Authorities in South Korea, Japan, the US all initially attempted to introduce blanket bans on cryptocurrency related businesses, later softening their stance with regulations instead of an outright ban. In fact, recent trend has shown that India may well be up to a similar path. There were reports in May that the country is considering introducing a retrospective tax on cryptocurrency trading rather than a ban.

For those interested, here is the full RTI application and RBI’s response to it (or download it here):