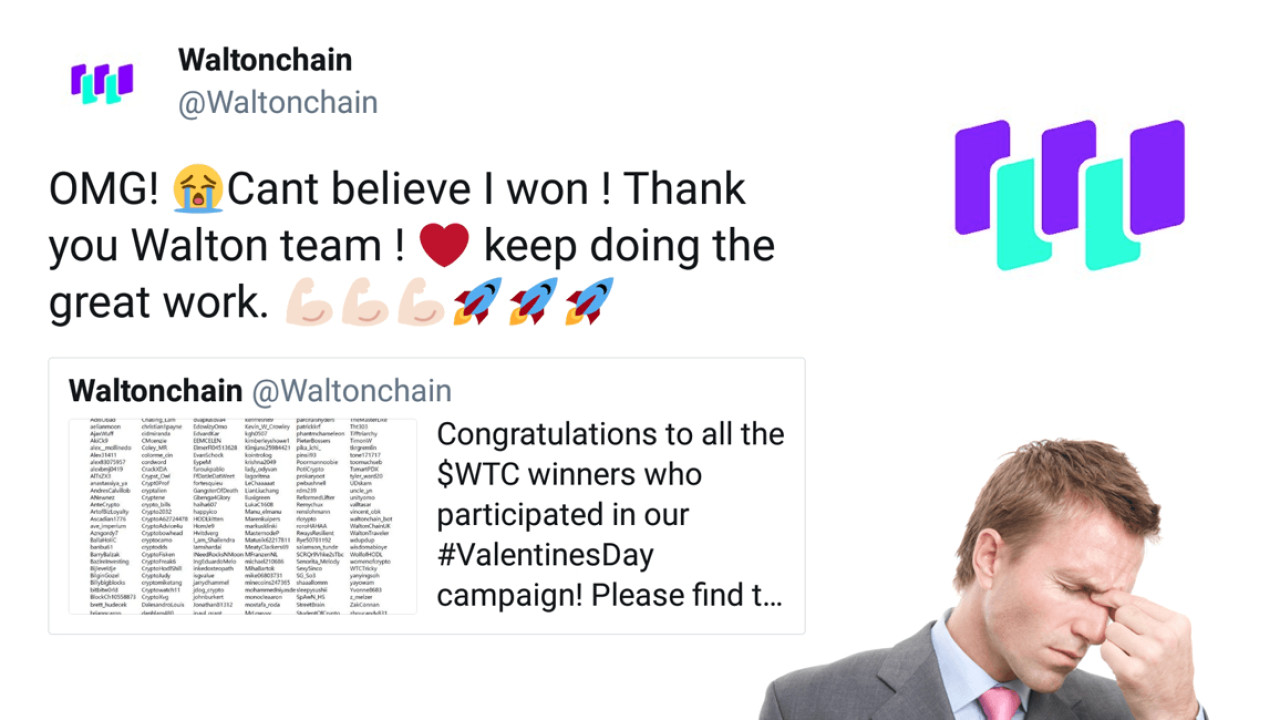 In an embarrassingly botched attempt to play it coy, budding blockchain startup Waltonchain got busted rewarding its own employees with cryptocurrency from a public giveaway that was supposed to go to its users. But here is the cringiest part: the company accidentally outed itself… on Twitter.

The China-based blockchain company, which seeks to provide a commercial ecosystem for the Internet of Things (IoT), recently ran a promo campaign for Valentine’s Day, encouraging users to follow its social media channels for a chance to win a small cut from its prize pool of 565 WTC (worth approximately $10,500).

Congratulations to all the $WTC winners who participated in our #ValentinesDay campaign! Please find the winners' list below and contact us before March 7th to receive $WTC. #Waltonchain

The awkward part came moments later, when a Waltonchain employee accidentally bragged that he was among the 200 lucky individuals to receive a small prize from the giveaway. But unfortunately for the employee, they forgot to switch to their personal account, accidentally tweeting from the official company Twitter.

As you can expect, Redditors were swift to snap screenshots of this blunder and the post has since gone viral.

In an attempt to salvage its reputation, Waltonchain has since issued an official response, apologizing to its users for this blunder.

It also posted a video on Instagram as proof that the selection process was not spoofed by greedy employees – though many users have since argued that the footage itself does little to explain away the actions of its employees.

“We would like to publicly apologize to all supporters,” the apology statement read. “We promise to deal with the matter in a serious and responsible way.” The company further added that it has since excluded the winning team member from its giveaway.

As you can expect, Waltonchain’s shenanigans have led a large number of its supporters to doubt its legitimacy as a company, with many investors claiming they will be selling their WTC holdings.

The sketchy move has caught the Waltonchain community off-guard. While supporters are largely disappointed in the company’s handling of the giveaway, some have taken to social media to voice their belief that the technology behind it is still solid.

As some have pointed out though, the blockchain startup should have exercised better judgement and forbidden team members from entering the contest in the first place.

In any case though: this sleazy trick will surely leave Waltonchain users with a sour taste in their mouths – at least for the next couple of months.