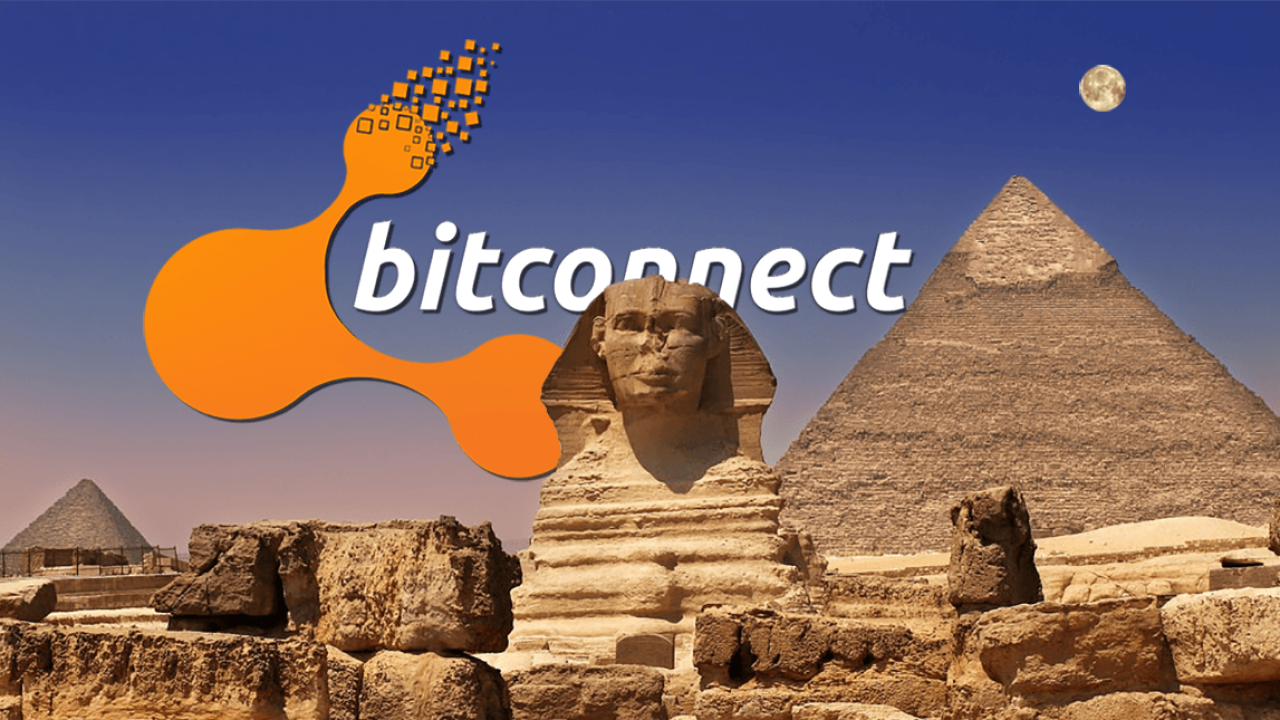 In a menacing turn of events yesterday, Bitcoin investment lending platform BitConnect abruptly announced it is shutting down its lending and exchange services. But while this sudden “curveball” might have come as a massive surprise for thousands of gullible investors, the writing was on the wall all along.

The company, which made its foray into the cryptocurrency scene with an initial coin offering (ICO) in late December 2016, swiftly cemented its position as one of 2017’s best performing currencies on CoinMarketCap. Indeed, during its heyday, BitConnect boasted a market cap of over $2.6 billion and a value exceeding the $400 mark.

But despite its meteoric growth and burgeoning user base, the investment platform attracted a swarm of naysayers with its suspicious business model, which vocal critics repeatedly labeled a Ponzi scheme.

Guaranteed to earn investors up to 40 percent total return per month, BitConnect followed a four-tier investment system based on the sum of initial deposit – the more cash you put down, the bigger and faster profits you could rake in.

Regardless of the stake though, investors were promised a one-percent return of investment (ROI) on a daily basis. To this end, the company had developed its own proprietary “trading bot and volatility software” that would turn your Bitcoin investment into a fortune. Or so the information provided on the website suggested.

This meant that salting $1,000 away into your BitConnect investment account could net you more than $50 million within three years, assuming the scheme does indeed live up to its promise for one-percent interest compounded on a daily basis. Needless to say though, many deemed this model unsustainable.

Among the first ones to voice his concern with the company was Ethereum founder Vitalik Buterin. “If [one percent per day] is what they offer,” he said on Twitter back in November, “then that’s a [P]onzi [scheme].”

Despite these warnings, BitConnect continued to pick up momentum.

Indeed, the company relied on an aggressive marketing strategy on all fronts. Putting aside its extensive digital and event marketing efforts, the company had enlisted a large army of multi-level affiliate marketers to recruit new investors, who could then work their way up by bringing in even more new investors – and so on and so on. In the real world, we call this a pyramid scheme.

Other than “educating” prospective investors about BitConnect, the sketchy marketers engaged in copious amounts of blatant shilling for the dodgy investment platform and its BCC coin.

The tactic, which the promoters employed across multiple channels and social media platforms, essentially involved ballyhooing the Bitcoin investment service by touting screenshots of the impressive “profits” BitConnect has brought them; that is despite the fact that most of their winnings came from affiliates – not investing.

Still, BitConnect was thriving with this disingenuous approach, attracting hordes of naive backers willing to put down their money. Indeed, the ingenuity of this method became most apparent when the platform began facing its first legal troubles.

As one of the 20 biggest cryptocurrencies by marketshare, by that time the bullish investment service had expanded enough to attract the attention of the authorities. Following an investigation in November, the British Registrar of Companies served BitConnect with a strike-off notice, threatening to shut it down and dissolve its operation unless further action is taken.

“Upon dissolution all property and rights vested in, or held in trust for, the company are deemed to be bona vacantia, and accordingly will belong to the crown,” the filings read.

Within a week, the news had reached mainstream media, with numerous outlets reporting on the affair and thousands of spooked investors speculating about the implications on Reddit. This is when the promoter emergency task force stormed in, spewing all sorts of mindless crap to dispel this “fake news.”

In fact, TNW was the star of one of these videos, created by a promoter better known as Ryan Hildreth. Hildreth has since wiped the video from his own YouTube channel, but someone was thoughtful enough to save and re-upload it. (Update: the video has since been deleted again)

Downplaying the legal threats, the promoters stuck to the script and continued to shill BitConnect. Instead, they suggested that the strike-off notice affected only a limited division of the company (BITCONNECT LTD), and thus would bear no repercussions for its main registration (BITCONNECT INTERNATIONAL PLC).

Following a closer look at the multiple instances under which the company was listed on the British Companies House website, it became clear that BitConnect had concealed – and possibly lied about – numerous material facts about its operation, including its location and the identity of its founding members.

Unfortunately, none of these warning signals seemed to have instilled a sense of doubt in the minds of the numerous investors. In the meantime, BitConnect was tirelessly working on upscaling its reputation and building up its brand worldwide to distract naive backers from the real troubles it was facing.

The company had signed a partnership with Blockchain Expo where it had its own stand in California, it attended the ICO EVENT conference in Amsterdam as a sponsor, and even hosted its own gaudy suit-and-gown gala night in Thailand. In fact, the last venue was where the notorious BitConnect meme was born.

Things would soon begin taking a turn for the worst though.

Less than two weeks ago, BitConnect got slapped with a cease and desist letter from the Texas Securities Board, ordering the company to close down its operation and cut distribution of BCC – at least until it had worked out an agreement with the Securities Commissioner or was granted the necessary exemptions to continue its business.

The notice from the Texas Securities board was followed by yet another cease and desist letter a week later – this time around from the North Carolina Securities Division.

Both filings insisted BitConnect was running a potentially fraudulent operation, implicating the company in a series of violations. Interestingly though, the North Carolina notice also suggested that the BitConnect promoters – who had accumulated thousands of dollars in profits – were also breaking the law.

Shortly after this news, the once-devoted promoters began distancing themselves from the platform, claiming they never endorsed it in the first place. Some of them went on to purge their entire YouTube channels, while others simply moved on to shilling other cryptocurrencies.

In the meantime, BitConnect had come up with a creative approach to distracting users away from the litany of “bad press” it was bombarded with.

The company had launched its own news segment – perhaps as a strategy to raise its SEO profile. But its content output was steady enough for Google to list the platform as a “legitimate” news source, displaying it in the dedicated news carousel on Search – side by side other credible medias.

Now that BitConnect had a regular stream of content, anyone Googling the company would be met with news bits produced by BitConnect itself. What was particularly problematic is that legitimate news pieces were now slumped under a pile of meaningless content.

Just like this, BitConnect had found a way to sweep all negative coverage under the rug by simply churning out more content – as far as Google search went at least. 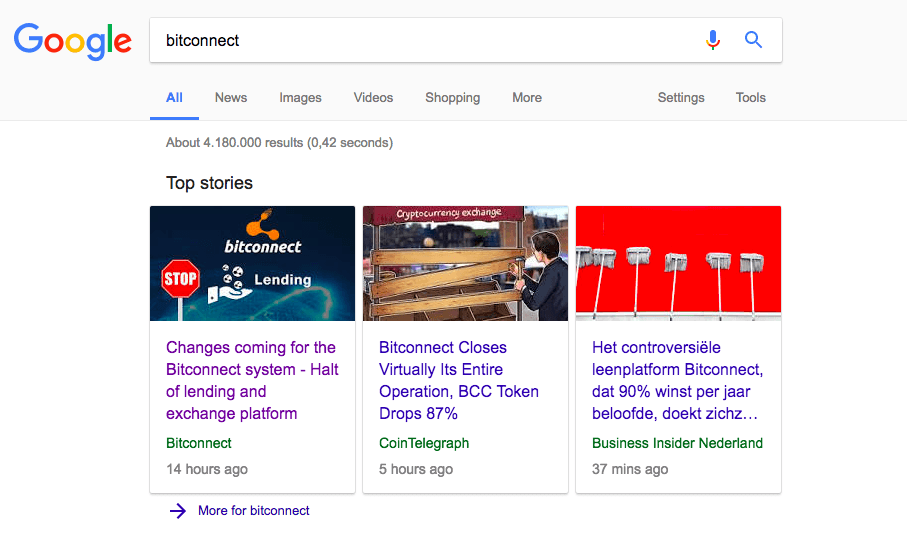 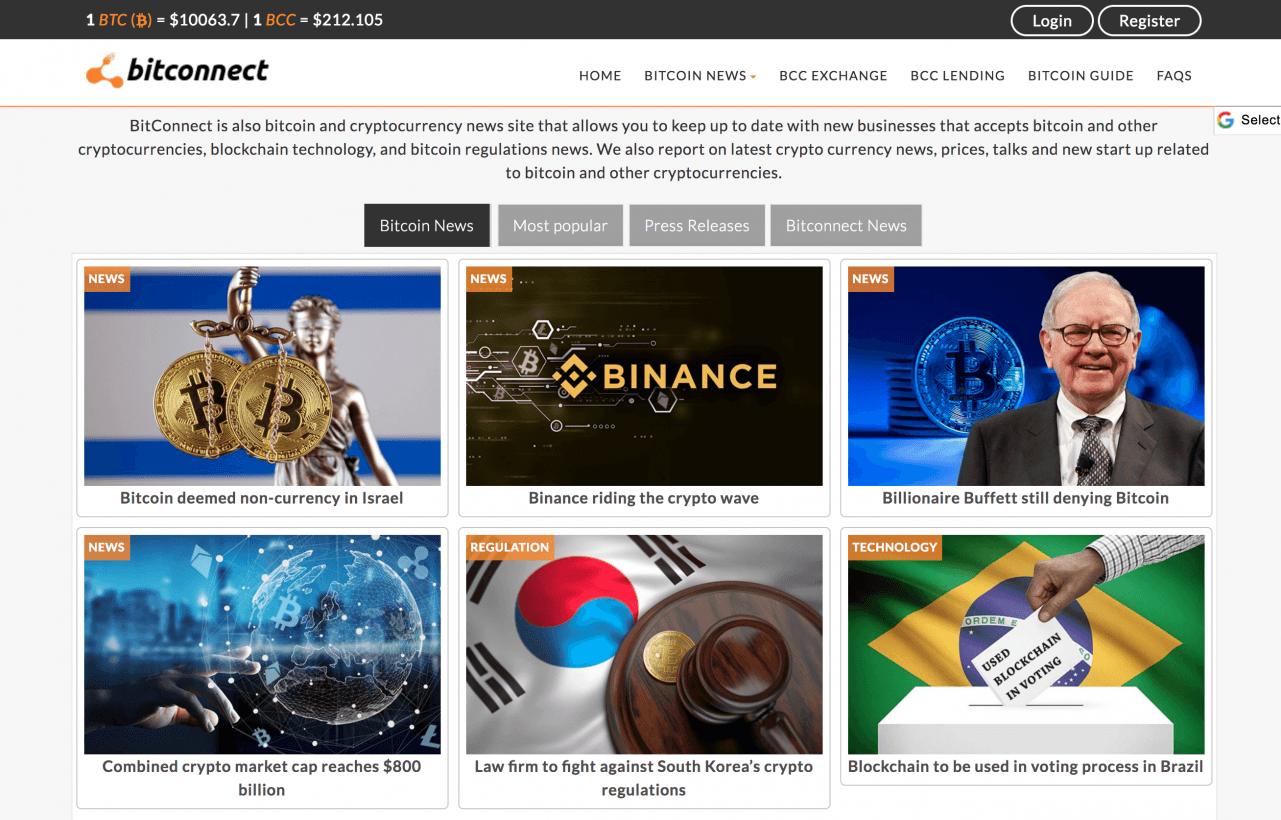 It was only yesterday when BitConnect’s shenanigans were finally starting to catch up with them.

Following a streak of server downtime, the company revealed that it was shutting down its lending and exchange platform. Above anything else, it attributed its fall to “bad press.” Though it did acknowledge that legal troubles and continuous DDoS attacks had also played a role in this decision.

“In short,” it continued, “we are closing lending service and exchange service while BitConnect.co website will operate for wallet service, news and educational purposes.”

In the aftermath of the announcement, BCC collapsed almost in an instant, plunging all the way down to under $30 – a monstrous 96-percent decrease in value.

Immediately after the ominous announcement began spreading across the net, hives of freaked out investors flocked to the BitConnect subreddit (which has since been locked down). The segment was flush with panicked posts.

“This cant be it. I lost everything. EVERYTHING,” one thread read. Another one – titled “800-273-8255 is the Suicide Hotline. Money Isn’t everything. Your life still matters after all of this” – encouraged distraught investors to stay calm and not do anything drastic. This is how deep the impact of BitConnect’s fraudulent operation is.

If that hadn’t become apparent by now, BitConnect was extremely popular across the board.

To give you a better perspective on the magnitude of damage BitConnect’s shifty business has caused to its thousands of investors, its site has been translated to several different languages – including Vietnamese, South Korean, Indian, Indonesian, Japanese, Thai, Cambodian and Filipino.

So why is it important to document the trickeries BitConnect resorted to? Because the signs were always there.

While the Bitcoin investment platform is practically defunct now, it has inspired a slew of copycats – including EthConnect (based on Ethereum), XRPConnect (based on Ripple), and NEOConnect (based on NEO). It is also important to remember that its BitConnect X ICO continues to be active.

Ignoring the fraudulent tactics that made BitConnect the behemoth that it was is tantamount to risking falling victim to the same scheme again – and we should do our best to avoid such traps.

So instead of writing it off, BitConnect must live on as a cautionary tale to every cryptocurrency rookie placing all of their eggs in a bottomless basket. You know what they say: All that glitters is not gold.