One of the things that made BitConnect so resilient to criticism was its wide network of promoters, shamelessly shilling the company on YouTube and other social media channels. But it seems that even these “once-passionate” supporters are leaving the Bitcoin investment platform behind – though probably not for the right reasons.

Following a menacing string of cease and desist orders served to the sketchy operation, BitConnect has been experiencing a series of long windows of server downtime over the past several days.

The website claims the reason for the outage is a “continuous DDoS attack” but a notice on its site reads its team is “performing some maintenance.”

We've been under continuous DDoS attack which inevitably affects our service. We're mitigating as fast as we can.
It may take up to 24 hours. Will update you once it is under control. We apologize for any inconvenience this may cause @bitconnect 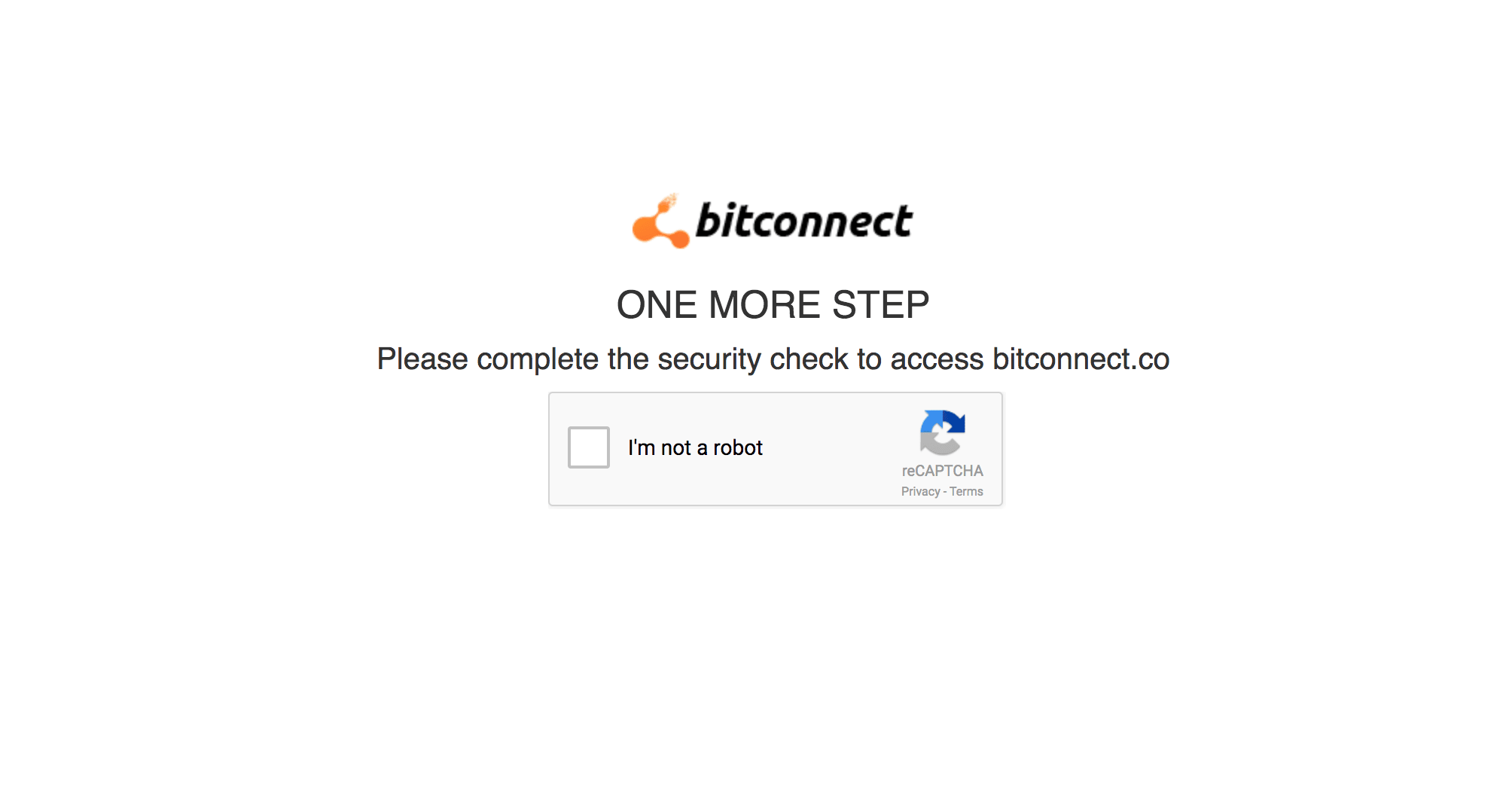 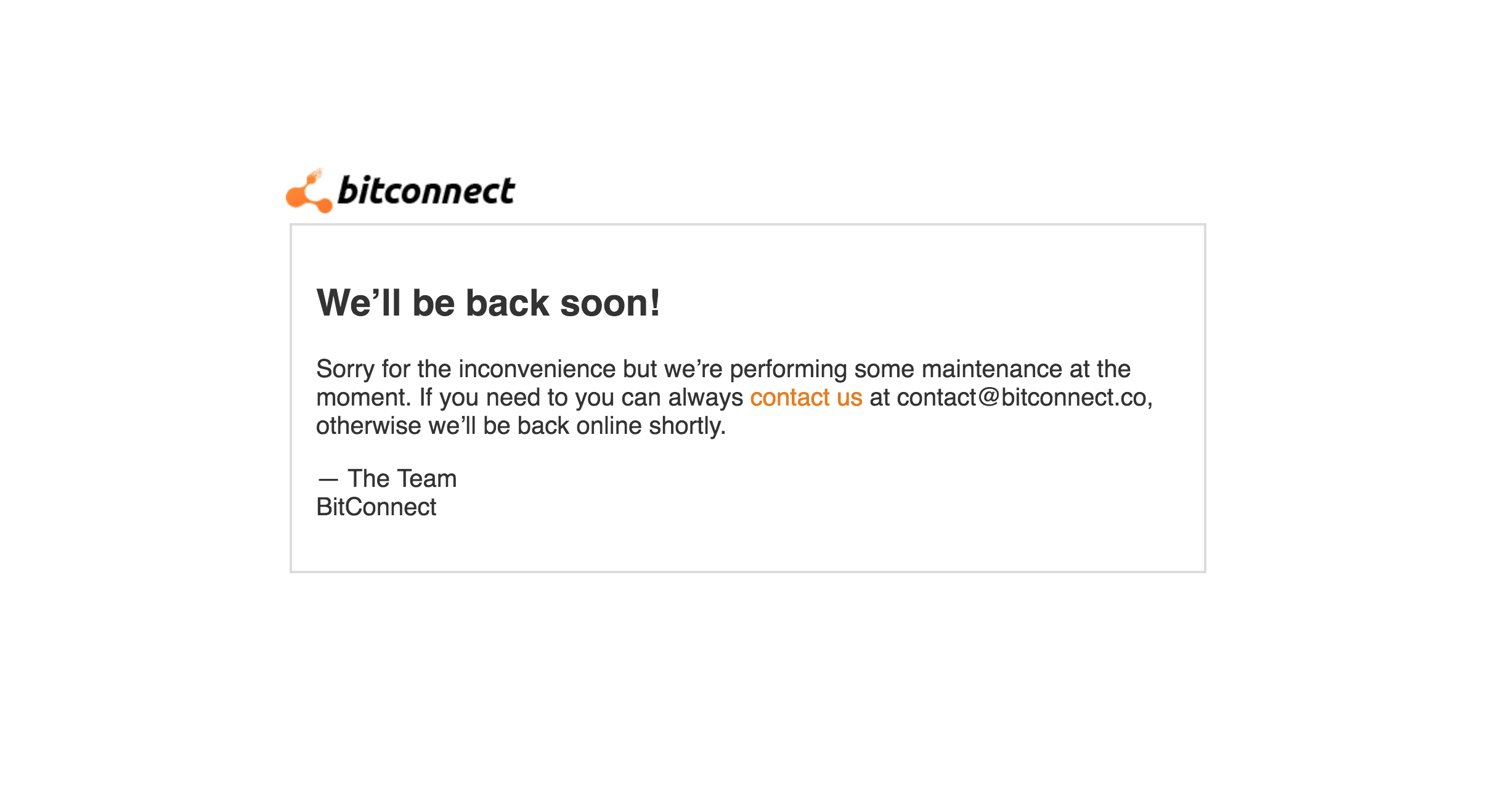 Whatever the reason, the downtime comes at a particularly ominous time for BitConnect.

Back in November last year, the company got slapped with a cease and desist letter from the UK, threatening to confiscate its assets and dissolve its operation unless further action is taken. The problem is things are only getting worse in 2018 so far.

In a matter of two weeks, BitConnect has received two more cease and desist orders – one from the Texas Securities Board and one from the North Carolina Securities Division. Both of these are targeting its main branch in the UK, as well as a few additional BitConnect registrations that appear in the British Companies House registrar.

Among other things, the orders accuse BitConnect of misrepresenting the risk involved in its investment scheme, failing to properly disclose material facts about its company and founding members, and failing to to establish a legitimate affiliate program for its promoters.

For context, BitConnect and its promoters – or affiliate marketers if you wish – have profited millions from such promo campaigns.

While long overdue, the legal action followed a slew of warnings from cryptocurrency pioneers like Ethereum founder Vitalik Buterin and Litecoin founder Charlie Lee, both of whom cautioned investors that BitConnect has all signs of a Ponzi scheme.

Meanwhile, BitConnect withdrawals continue to be unavailable; still, users are allowed to invest and lend loans. Yesterday the website insisted, that following a downtime of over 50 hours, its team needs another 24 hours to enable withdrawals. This is yet to happen.

Although BitConnect promoters have in the past proven themselves quite stubborn when it comes to registering obvious red flags, it seems most of them are finding it difficult to ignore the latest heap of issues their favorite investment platform is facing.

In fact, it all but looks that many of them are abandoning ship – and perhaps for good this time around.

Among the first ones to make an exit was leading BitConnect promoter Glenn Arcaro, who has been listed as a director in the company under one of its many registrations on the British House Registrar. Interestingly, Arcaro has claimed in the past that the registration details behind his name are false. He continued to promote the company regardless.

Arcaro, who previously had numerous videos promoting the Bitcoin investment platform, has suddenly purged all footage from his YouTube channel. His “colleagues” are following his lead too, it seems.

Craig Grant, another promoter associated with BitConnect, has also stated his intention to stop promoting the company in the future – at least until it has sorted out its problems. Instead, he has now shifted his efforts to shilling initial coin offerings (ICO).

In a similar fashion, fellow promoter Trevon James – who recently suffered a mental meltdown over the possibility of going to jail for fraud – is also distancing himself from BitConnect.

CrpytoNick, a 17-year-old YouTuber promoting the dodgy Bitcoin investment platform to his almost 200,000-strong user base, is also taking a step back from BitConnect.

In a recent video titled “Is BitConnect Pulling A Exit Scam,” the 17-year-old says he should not be “considered a promoter” for the website. That is despite the fact that he’s netted over $800,000 in affiliate rewards from BitConnect. Then he goes on to show off his $60,000-worth altcoin portfolio.

Whether BitConnect is indeed approaching its last days is still difficult to tell. But given the free-falling price of Bitcoin, it seems its most trusted defenders are surely preparing for a doomsday scenario. Indeed, many had argued that the only thing keeping BitConnect afloat was the incredible bull run Bitcoin pulled back in 2017. Unfortunately, this streak appears to be coming to an end.

Needless to say, the promoters are still getting the better end of the deal – despite the fact they’ll probably take home smaller profits. The bigger losers, of course, will be the regular investors, especially those that were late to the party.