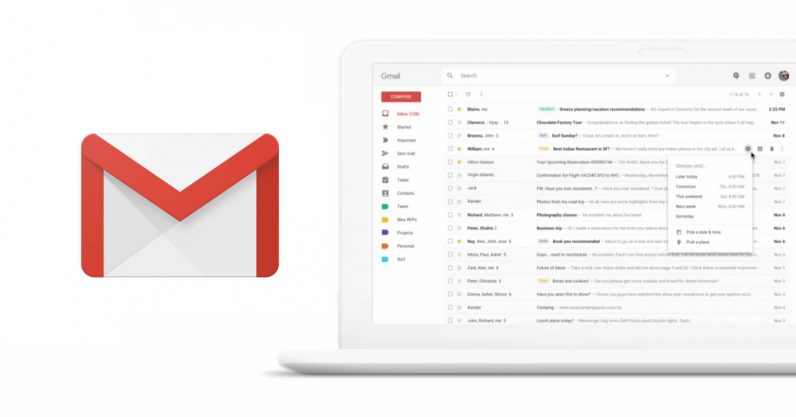 Earlier today, Google emailed G Suite customers letting them know a new version of Gmail is on the way. The email was supposed to be ‘customer confidential,’ so naturally it’s already leaked all over the place. Since then, Google has confirmed to TNW a redesign is on the way.

The G Suite email was light on specifics, but revealed a few key features coming with the update. In Google’s own words, here’s what’s new:

Google notes that these features will arrive first as a part of an Early Adopter Program [EAP] for G Suite customers, but that it will also be made available for personal Gmail accounts. I wouldn’t be surprised to see it roll out as an opt-in beta to start, as was the case with last year’s Calendar redesign.

Offline support, meanwhile, is slated to arrive by June 2018. Google had previously announced it was turning offline Chrome apps, which were largely aimed at Chromebooks, into Web apps. That means you’ll be able to draft and read some emails without an internet connection.

When asked about the changes, a Google spokesperson provided the following statement:

We’re working on some major updates to Gmail (they’re still in draft phase). We need a bit more time to compose ourselves, so can’t share anything yet—archive this for now, and we’ll let you know when it’s time to hit send.

While the timing of the redesign is a bit of a surprise, the news itself isn’t. We’ve been hearing about a Gmail redesign since last year. At the time Google had revealed it was working on adding some new features to Gmail, including Smart Reply, Smart Groupings, and Snooze – all staple’s of Gmails smarter alter-ego, Inbox.

The slide above (courtesy of Android Police) came from Google’s NEXT Conference last year. While it’s possible the final design may end up looking quite different, it does match a description of the new design provided to TechCrunch today.

With the redesign, it’s not clear whether Inbox will have much of a reason to stick around, but given the majority of Gmail users use the standard Web interface, it’s probably a change for the better. It’s not clear when exactly the new design will be available, but I’d bet that’ll be before Google I/O is over next month.

Read next: Researchers trained an AI to create Flintstones cartoons