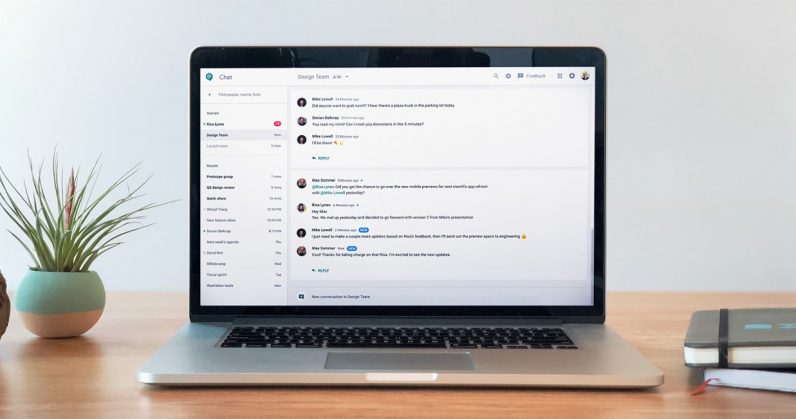 Following a year-long beta, Google is now rolling out Hangouts Chat – its team messaging service that rivals Slack – to G Suite customers across the world over the next week.

For those out of the loop, that means anyone who’s paying for Google services like Gmail and Google Drive to use with their own domain.

As with other collaboration tools, it lets you chat with your team and with smaller groups of colleagues, with threaded conversations, document sharing via Google’s suite of tools, scheduling for meetings, and video calls with up to 30 people at once through its sister app, Hangouts Meet. And of course, you’ve got native desktop and mobile apps to log in with.

There’s also a bevy of AI-powered bots to handle various tasks and integrate with other services, like Salesforce, Freshdesk, Zenefits, Trello, and Kayak. Developers can build their own bots to tie into Hangouts Chat.

So, where does that leave the original Hangouts? It seems like Google just don’t know how to kill it off without inconveniencing users: Hangouts continues to live as an independent service, resides in your G Suite Gmail inbox as another way for people to contact you, and the new Chat service will let you connect with your existing contacts. Yeah, I dunno.

With that, Hangouts Chat is now ready to go up against Slack (6 million users as of last September), Microsoft Teams, Facebook Workplace, Atlassian’s Stride, Flock, Zoho Cliq, and Keybase’s free Teams. Google grew its G Suite customer base by a third over the past year to 4 million businesses, so it could well have a fighting chance in this battle.

Read next: Piccolo wants to watch your every move and automate your home