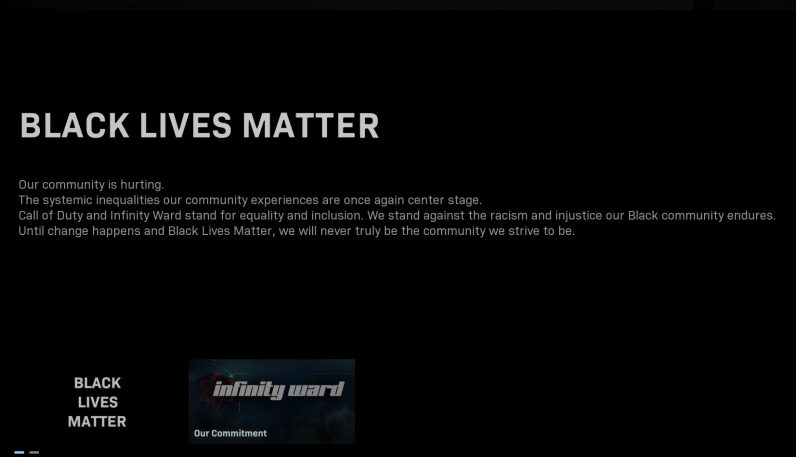 Call of Duty developer Infinity Ward has updated Modern Warfare with a message of support for the Black Lives Matter movement.

The message, which appears on the game‘s Message of the Day segment, as well as the loading screen for its battle royale format, Warzone, shows solidarity for those protesting against racism and the senseless killing of George Floyd.

Our community is hurting,” the message reads. “Call of Duty and Infinity Ward stand for equality and inclusion. We stand against the racism and injustice our Black community endures. Until change happens and Black Lives Matter, we will never truly be the community we strive to be.”

THIS IS THE NEW BOOT SCREEN ON CALL OF DUTY

“There is no place for racist content in our game,” the statement reads. “We’re issuing thousands of daily bans of racist and hate-oriented names.”

While Infinity Ward generally tries to curb potentially offensive language on its platform (everyone whose played Modern Warfare has not***d the g**e has a slightly dysfunctional censor***p system), the company doesn’t really apply the same censoring filters to its usernames. The developer hopes to fix that in the future, though.

To show support for Black Lives Matter, earlier this week Infinity Ward announced it’ll delay launching Battle Pass Season 4 for the time being. The update was slated to drop on June 3, but the company ultimately decided to push it back due to the recent Black Lives Matter protests across the globe.