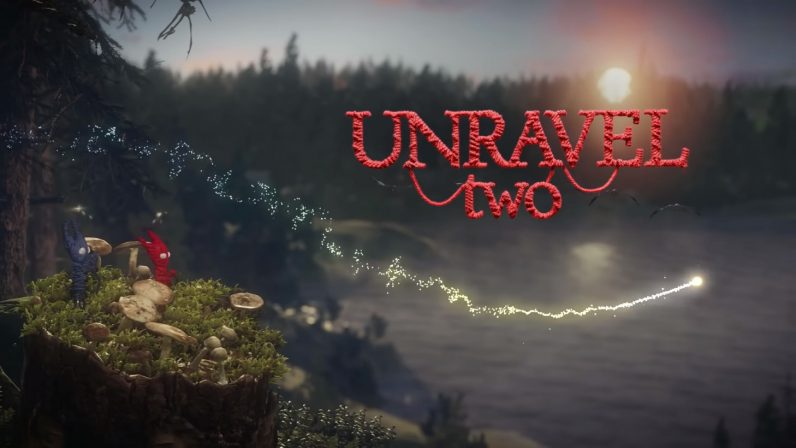 Unravel 2, from developer Coldwood and publisher EA, is a beautiful platforming game that invites players to control a pair of adorable creatures made of yarn through a series of stages featuring fantastically rendered photo-realistic environments. It’s also one of the best local co-op experiences I’ve seen.

In the game you’ll take the role of two Yarnys, creatures that could be described as tiny string-golems. You run, swing, jump, flip, push, pull, and tumble your way through various colorful environments as part of a loose narrative involving childhood.

The first thing you’ll notice is the amazingly immersive graphics. Yarny is only a couple of inches tall and the world, often displayed in startlingly realistic depictions, looks dangerous and huge. Hazards and enemies lurk in every corner and you’re constantly unsure of what’s going to happen next.

Gameplay is similar to the first, but everything’s been tweaked to look and feel a little better. Instead of floating through the air when they jump, as they did in Unravel, Yarnys tuck and flip in the sequel. They feel springier and more responsive.

New to the franchise in this iteration is the ability to play the game with a friend via local co-op. Each of you can take control of one of the Yarnys and play through the entire story campaign. The addition is implemented so masterfully that it almost serves as a cure for frustration, something often associated with platformers.

Instead of simply designing every level with the standard fair – puzzles that require both players to operate a switch, lever, or button at the same time – some levels are wickedly difficult because they aren’t designed necessarily for two players. In such cases, one of Unravel 2’s most unique mechanics comes into play, namely the ability to combine both characters into one Yarny, thus allowing a single player to control them.

Not only does it make chaotic scenes where the Yarnys are fleeing easier, but it also gives players the option to trade off control just to suit their personal tastes or skill levels. Some environments require precision jumping while others may rely on Yarny’s swinging mechanic to accurately fling the characters into a tough-to-reach spot — players can choose who’ll tackle each portion and whether they’ll literally work together as one combined Yarny or separately.

Coldwood also included customization options for Yarnys, which you can unlock through the completion of dedicated “challenge” levels. You can change Yarny’s color, the shape of its head, and determine whether it looks like its wearing a dress or not. It’s all cute and well-done, but I have to admit I was hoping for something more along the lines of Sackboy’s customization options from Little Big Planet – this is not that.

Unravel 2 is one of those rare games that you can play with your children, parents, friends, or significant other without ever having to worry about mature or violent content making anyone uncomfortable (there are brief moments of peril that could scare small children). And, while it can be played single-player, it absolutely shines when you play it with someone who’s willing to immerse themselves with you in a wonderful, touching story.

Unravel 2 joins the excellent A Way Out in EA’s Originals lineup. It’s available now on Xbox One, PC, and Playstation 4 for $19.99.

Read next: Report: Microsoft really is working on a 'pocket-sized' folding Surface