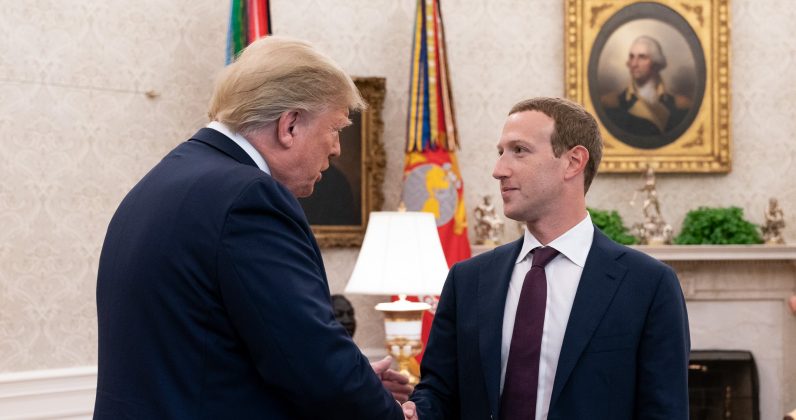 It’s no secret that Facebook CEO Mark Zuckerberg sees TikTok as a threat. On several occasions, he has brought up TikTok‘s data collection and censorship policies to point out that the app might be a threat to the American democracy.

While TikTok is now battling for survival in the US, it seems that Zuckerberg might’ve played a key role in the app’s current situation. According to a report by the Wall Street Journal, he discussed TikTok and threats from other Chinese internet companies to American businesses at a private dinner with President Donald Trump last October.

WSJ’s report also notes that the Facebook CEO discussed the short video app with Republican Sen. Tom Cotton, who wrote a letter to open a national security review into TikTok last October. In November, Zuckerberg also met Sen. Josh Hawley, who wanted the app to be banned on all federal devices.

Kelli Ford, a spokeswoman for Hawley, told WSJ, “Facebook has recently been sounding the alarm about China-based tech as a PR tactic to boost its own reputation.”

Last month, TikTok’s CEO, Kevin Mayer, took a swipe at Facebook by saying that the company should engage in open competition rather than attacking the app under patriotism’s disguise:

Facebook is even launching another copycat product, Reels (tied to Instagram), after their other copycat Lasso failed quickly. But let’s focus our energies on fair and open competition in service of our consumers, rather than maligning attacks by our competitor – namely Facebook – disguised as patriotism and designed to put an end to our very presence in the US.

TikTok is one of the biggest competitions Facebook has faced in the past couple of years. With more than 100 million users in the US, the app might be swaying people away from Facebook’s dominant set of apps. The social media giant will definitely has a lot to gain if TikTok gets banned in the US. So it might not be entirely unbelievable that Zuckerberg is lobbying against them.

Read next: How wearable fitness devices can give early warning of possible COVID-19 infection